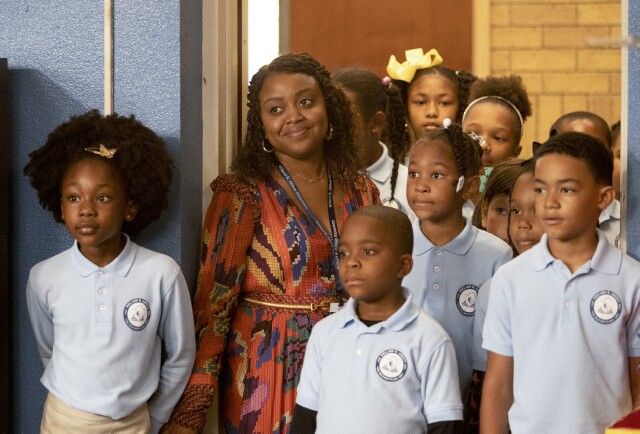 Slice-of-life comedies have been all the rage since The Office. When I was a kid, the closest we came to seeing how real life looked on a television (outside of the news) was Mr. Rogers walking us through a newspaper factory or canning facility or something. Then came wonders like The Office, Parks & Recreation, Reno 911!, American Vandal and Modern Family and even shows like Brooklyn Nine-Nine and Superstore that adopted the popular visual style of these mockumentaries without actually establishing canonically logical reasons for them to appear that way. Then, at the tail end of 2021 we were blessed with something new: ABC's Abbott Elementary.

This particular slice is one I've tasted before, because I'm a survivor of the half-stale cake that is the American public-school system, and what's more it features a predominantly Black school in a seemingly diverse neighborhood. So, let's talk about a show featuring a school that has an F- budget and a C- principal that somehow snuck up on us with some A+ plus laughs.

Abbott Elementary was created by actress, writer and stand up Quinta Brunson (pictured at top), who stars as Janine Teagues, a bubbly, idealistic second grade teacher who happens to work in one of the most mismanaged and underfunded public schools in all of America. Working alongside her are Melissa (Lisa Ann Walter), an Italian lady with a Boston accent who's "got a guy for everything;" Jacob (Chris Perfetti), who's kind of a nerd about being an "ally," and Barbara, the one who's been there longest and is played by none other than Sheryl Lee Ralph, whom I remember most as Moesha's stepmom on the eponymously named Nineties sitcom. Tyler James Williams of Everybody Hates Chris is also on board as Gregory, a not-so-temporary substitute teacher who was originally hired to be principal before being passed over. Which brings us to the perfectly preposterous principal none of is knew we needed, Ava Coleman, played hilariously by comedian Janelle James.

The obvious selling point of this series is James' work as Ava. Seriously, some of the lines that she gets to say are so ridiculous it's amazing, and her timing and comedic pitch are just flawless. Beyond her, however, is a series with real heart. The reason this school is being "filmed" is because it's a part of a documentary about America's worst public schools. Ava, being the fool that she is, is more interested in being in front of those cameras than anything else, with the well-being of the children and the needs of her staff falling way to the back of the line. This probably has something to do with the fact that, as she put it, "I go to the same church as the superintendent, caught him cheating on his wife with the deaconess. I needed a job!"

This "footage" that we're seeing, however, tells the story of Janine and some of her more seasoned co-workers, who all care for their students with different styles of the same kind of passion and verve. Things under Ava definitely haven't improved. The toilets don't work (one shoots water at users), the lights flicker, the rugs that the kids have for naptime and what not are unusable, the district can't afford to hire teachers' aides, and the younger, newer teachers don't seem to make it more than a year. I mean … the whole thing is a mess. That's why, as Barbara puts it, there are "more turnovers than a bakery," and why the story of this small group of people who really care becomes so important.

Now, important as all that is, there's also the vague scent of a workplace romance in the air. I see the tracks being laid for Gregory to be into Janine, and vice versa, not unlike a Jim-and-Pam-type situation. We do meet Janine's boyfriend for a second, but honestly it seems like he, for lack of a better description, ain't sh*t, and I imagine he won't last all that long.

In an episode about teachers having Amazon wish lists and making videos on social media in order to crowdfund school supplies (which is a real thing, believe it or not), Ava walks by and notices Janine on the internet. "Ooh, are you on TikTok?" she asks. "Did you see my video that I did about softening elbows? I did it to the tune of [Wiz Khalifa's] 'Black and Yellow.' It blew up!" Then she sings it into camera. "Soften elbows, soften elbows," which legitimately made me laugh.

Later on Janine asks Ava to delete a video she previously asked for help with, but Ava tells her it's too late. "Oh, girl, it's out. It's up and out, and it's hot! These are OnlyFans numbers. I usually gotta show feet to go this viral!" Ava. Is. Ridiculous.

For real, I'm genuinely upset by the one-episode-a-week nature of this show. I need a 24-episode season now so I can have a fulfilling binge and then start over to catch all the stuff I missed the first time around. The comedic yet true-to-life portrayal of issues that real students and teachers in real schools across America have to deal with serves as the perfect contextual backdrop for this ensemble of characters and personalities, while its workplace sitcom nature will always allow for ways to shake things up (staff leaving/getting hired, new parental interactions, state involvement, etc).

How great is it that Quinta Brunson now gets to practice her storytelling on network television after hitting big on YouTube way back in 2014? (It's kind of like Issa Rae making the jump from YouTube to HBO.) She has a lot to say, and now has an exciting new place to say it. Class is in session, folks.