ABC at TCA: Good Buzz for Its Midseason Shows, Bad Buzz for "The Bachelor" - Ed Martin 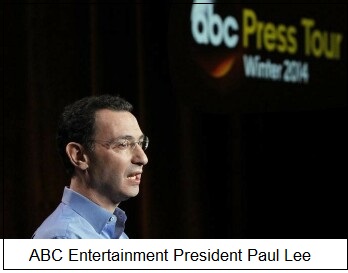 Pasadena, CA -- ABC Entertainment President Paul Lee did his best on Friday to convince critics and journalists gathered here at the Winter 2014 Television Critics Association tour that his network had a very successful fall season, which came as a surprise to many people in the room, since it appeared in recent months that so many of ABC's signature shows – including "Revenge," "Once Upon a Time," "Dancing with the Stars" and "Nashville" – didn't seem to fare as well as they had in seasons past. And then there were all those freshmen series that just died on arrival -- "Betrayal," "Lucky 7," "Super Fun Night," "Back in the Game," "Once Upon a Time in Wonderland" – and those that were well-received but have yet to take off, like "Marvel's Agents of S.H.I.E.L.D.," "Trophy Wife" and "The Goldbergs."

But Lee gamely explained -- as one hears from virtually every network executive these days -- that Live+ Same Day and Live+ 7 numbers reflected strong second wave growth for almost all of his shows. He also noted that, absent sports, ABC actually won the November sweeps period.

Lee arguably had the most exciting new post-Olympics midseason series to talk about of any broadcast network at this tour. They include the haunting "Resurrection," a series about deceased individuals who suddenly return to life years after their deaths without having aged and acting as though nothing unusual had happened; "Black Box," a psychological drama about a famed neuroscientist who struggles to keep secret her own mental illness, and "Rising Star," a very promising new take on a seemingly played out concept. It's a singing competition based on an Israeli format in which home viewers act as the judges and vote via smart phones and tablets during live telecasts of the show. (As they vote viewers' faces appear on a giant wall in front of whoever is singing at that time. If and when the positive vote total hits a certain level the wall rises and the singer knows he or she will move on to the next week.)

Versions of "Rising Star" are huge hits in every country in which they are telecast; but those countries do not have multiple time zones. Lee said ABC is currently wrangling with the time zone issue but promised some interesting solutions to this challenge, which include possibly allowing fans on the west coast to watch and vote on mobile devices during the live east coast telecast.

Lee also weighed in on the pilot season issue Fox's Kevin Reilly had put into play earlier in the week. "All four [big broadcasters] are in the middle of pilot season at the moment," he said. "We have a number of pilots that we've picked up and we're very excited about. The upfront is very important to us and will continue to be important for the foreseeable future.

"You know, I'm a gradualist, for good or ill, and we are gradually moving off [pilot season]," he continued. "If you think of the things that [we] brought to you here for midseason, we didn't take 'Black Box' to the upfront [and] we didn't take 'Rising Star' to the upfront. It's definitely true that we have the ability to take our time … but it's equally true, as [CBS' Nina Tassler] said, that the focus and the deadlines that pilots bring have been extremely successful for American television for 50 years. I [worked] in British television and looked up to the American ability to create television [series] that last for five, six, seven years. I am immensely proud of what our show-runners have done in pilot season. So I think it's a mixed economy."

Overall ABC put on a very full and productive day Friday at TCA, which consisted of a session for ABC Family's drama "The Fosters" and panels for new series "Resurrection," "Black Box," "Mind Games" (a drama starring Christian Slater and Steve Zahn that defies easy explanation) and "Mixology" (a comedy about young people looking for love and sex during one very long night in a bar that plays out over ten episodes), along with the returning comedy "Suburgatory" plus an informal interview opportunity with Connie Britton and two producers from "Nashville" and an evening party attended by dozens of stars and show-runners from the network's primetime and daytime lineups.

But the real excitement for ABC began the following morning, when news broke that Juan Pablo Galavis, star of the current season of "The Bachelor," had during an interview at the party the night before made homophobic remarks when answering a reporter's questions about whether or not there should be a gay edition of "The Bachelor." (Interestingly, Juan Pablo was doing this interview as bellhops at the Langham Huntington Hotel were delivering a dozen red roses to the rooms of each and every TCA member – female and male – along with a note from him asking if the recipient would accept the flowers.)

This became the biggest controversy of the TCA tour since the dust-up about nudity in HBO's "Girls" a week earlier. ABC and Warner Horizon Television (which produces "The Bachelor") had a dilly of a day on Saturday distancing themselves from his comments while also spinning the situation and attempting to explain it away by suggesting Juan Pablo, for whom English is a second language, simply used the wrong words (especially "pervert") to express how he felt about gay people. Juan Carlo took to Facebook to offer apologies, asserting that his comments, which were published word for word, were somehow taken out of context. The publicity all of this has generated has been monumental; whether or not it will prove damaging remains to be seen.