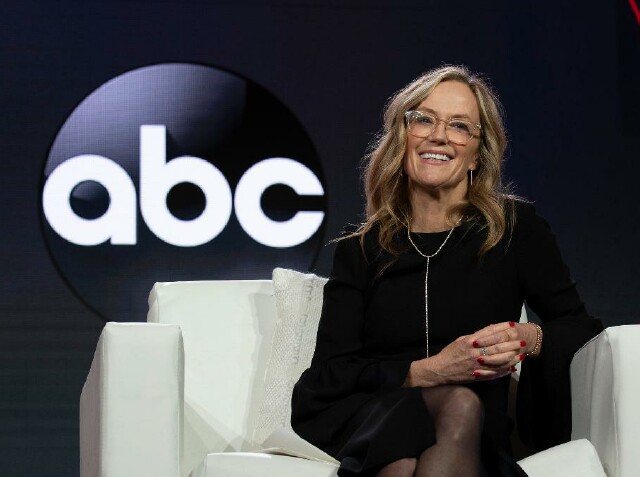 Pasadena, CA – ABC on Tuesday borrowed a delightful tradition from its annual Upfront event in New York City by adding Jimmy Kimmel to its day at the Winter 2019 Television Critics Association tour.  Kimmel wasn’t there to do a monologue, though.  Or to participate in his own press conference (though he should have).  Instead, he was on hand to introduce new ABC Entertainment President Karey Burke.  True to form, taking shots at his own network was not off limits.  But his aim went much wider than that.

“On behalf of the ABC Television Network today, I am honored and ‘hashtag blessed’ to introduce our new president, Karey Burke,” he began.  “As you know, President Burke won an historic victory in November, winning by the largest margin in President-of-ABC history.  So, it’s no surprise that more than 40 million of you, according to Netflix, gathered in this room to celebrate.  John Landgraf says it’s less, but we know the truth. 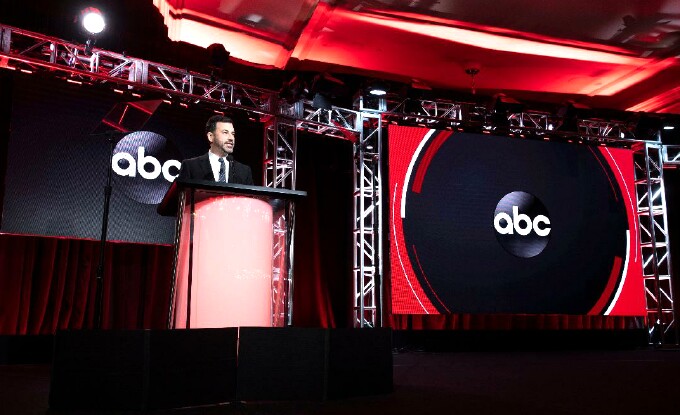 “From there, Karey went on to run Freeform.  While we still do not have any idea of what Freeform is, she ran the hell out of it, all the way to No. 1.

“On November 19, Ms. Burke was named President of ABC, and she has already done more for ABC than every other ABC president combined.

“She is currently building a big, beautiful office at ABC headquarters, and El Segundo will pay for that office.  That, I can tell you.

“Most importantly, President Burke plans to repeal and replace Dungey Care, which has been a disaster from day one.

“I’m thrilled and honored and, most importantly, paid to introduce you to the president who will make the American Broadcast Company great again” he concluded.  “Ladies and gentlemen, per [TCA] tradition, please do not move or clap at all.  Please do not show any enthusiasm whatsoever for Karey Burke.  Thank you.”

Burke proved as engaging and at time as humorous as Kimmel.  “I am here in what is truly, for me, the job of a lifetime,” she said.  “It’s taken me 30 years to get here … and I do not take this responsibility lightly.  I care deeply about one thing, making ABC the best home in television for creators to tell their stories.

“I’m quite aware that we have our work cut out for us,” she continued.  “For starters, whether we’ve been up or down, ABC has a long history of being No. 1 with women.  We lost that mantel this season, and I am determined to get it back.  It’s always been my personal goal to create the best opportunities for women in front of and behind the camera, and I know what’s possible when women come together and share their vision.  That’s just the beginning of the work ahead.  I’m also quite aware of how much has changed since the days of Must See TV.  What hasn’t changed is the power of broadcast television to reach into our hearts and minds every night and every week and, at its best, thrill us, surprise us and unite us.  Every day in the two short months that I’ve held this job, I’ve been guided by a mantra that I learned from Warren Littlefield, who learned it from Grant Tinker, so it’s got serious broadcast legend street cred.  That mantra is this: ‘First be best. Then be first.’  It’s that simple.  If that is our true north, we will get back to where we need to be at ABC.”

Burke also revealed that ABC’s The Bachelor has long been very popular with her young daughters, who are anxious to visit the mansion that serves as the show’s primary set. (Not gonna happen, Burke asserted.)  During the Q&A that followed, one critic said, “It sounds like you have a lot of affection for The Bachelor and the franchise.  What kind of ethical standards do you hold the show to now, as the person in charge of it, in terms of how it treats people and turns them into soapy ABC entertainment?”

“I think the show has done a remarkable job over its many seasons of taking care of its own ethical standards,” she replied.  “I actually was pleased to see last week’s episode in which Caelynn really spoke her truth about her sexual assault.  That was a place the show hadn’t gone before, that I felt was really powerful and important.  It sparked a really compelling conversation in my house.  My daughters started watching it in their teen years.  [I get asked] as a feminist, how can I allow my children to watch this?  I sat down and watched it with them, and I realized if you don’t think those women have power, then you aren’t watching the show correctly.  Those women have a lot of power, and they are using it well.  I think it is some of the best storytelling on television.”

The critic wasn’t satisfied and asked, “But it’s also made the people who are producing it, who have all the power, right?  So, they’re the ones shaping it.  I’m just curious if you care what they’re doing to people.”

“I do care,” Burke replied.  “I have come to know some of the former Bachelors and Bachelorettes in this job and in my role at Freeform, and I think they would tell you to a person that the experience was phenomenal for them.  It’s been life-changing for many of the people on the shows.  There are many, many relationships and children that have come out of [them].”

Staying with concerns about women, another critic said, “You mentioned that ABC had lost its traditional No. 1 spot with women.  I’ve often felt that TV took women for granted because women watch a lot of TV, so they’re chasing the people who don’t.  What do you attribute the loss to?  Can you point to anything that you’ll be doing differently to try to get women back?”

Burke replied with the observation that NBC “came on really strong and took that mantel away with shows like This Is Us and we slipped a little bit.  And, some of our returning shows came back softer than predicted.  But you can see in the case with something like The Good Doctor, the team here positioned it to come back in January.  We put more marketing behind it, didn’t take the show for granted, and it’s doing very, very well and better than it was in the fall.

“What I can do now is choose pilots from the development that existed,” she continued.  “A lot of the pilots that we’ve chosen have been more female-forward than perhaps in the past year or two.  They’re not female-exclusive,” she hastened to add.  “They also have a lot of male appeal.  But we’re just using a few more that have strong female leads and points of view.”