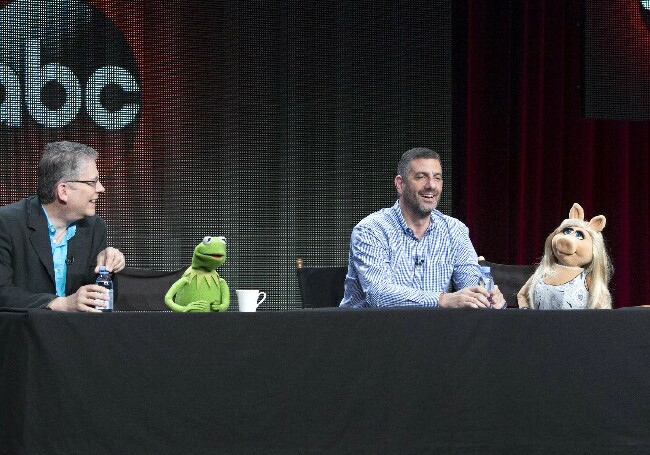 It was obvious back in May during the broadcast networks’ Upfront week that ABC had the most talked about new series of the fall with its updated version/franchise continuation of that multi-generational modern classic “The Muppet Show,” now known as “The Muppets.” Advertisers and the press instantly embraced the return of such iconic characters as Kermit, Miss Piggy, Elmo and many others. The excitement continued yesterday during the first of ABC’s two days at the Summer 2015 Television Critics Association tour, which began with a press conference featuring Kermit and Miss Piggy (pictured at top with “Muppets” executive producers Bill Brady, left, and Bob Kushell) – during which one of America’s favorite celebrity couples confirmed that they are calling it quits. Like almost everything else these days, the announcement rocked social media, galvanizing Facebook and causing Twitter to once again blow up.

So far there has only been a brief video presentation of "The Muppets," rather than a complete first episode, but that appears to be enough to explain the show. It’s a mock-documentary (not unlike “The Office”) punctuated by testimonial-style interviews that takes a behind-the-scenes look at the production of a late-night talk show titled “Up Late with Miss Piggy.” Real life celebrities will be featured as guests. As was made clear yesterday, there will be much drama behind the scenes having to do with the combustible relationship between fresh exes Miss Piggy and her executive producer, Kermit.

The tension between frog and pig -- and Miss Piggy's usual diva antics -- helped make the panel the best of ABC’s day, a long but fast moving and informative nine-plus hours that wrapped with an all-star party at the Beverly Hilton hotel. The “Muppets” were followed by panels with ABC Entertainment President Paul Lee and the casts and producers of new shows “Quantico,” “Wicked City” and “Dr. Ken” and returning comedy “The Goldbergs.” Shonda Rhimes and the executive producers and lead actresses from her three ABC hits “Grey’s Anatomy,” “Scandal” and “How to Get Away with Murder” closed the day. As is generally the case whenever she appears on TCA panels Rhimes was polite throughout but had strikingly little to say about her shows, her success or anything else. Fortunately, Viola Davis ("HTGAWM"), Ellen Pompeo ("Grey's"), Kerry Washington ("Scandal") and "HTGAWM" creator Pete Nowalk were on hand to keep things moving.

ABC’s TCA presentation continued today with one last panel -- for the primetime serial “Blood and Oil,” already pegged by the press as the next "Dallas" (which isnot a bad thing at all). That was followed by a festive coffee break co-sponsored by Teleflora.com to mark the upcoming 50th anniversary telecast of “A Charlie Brown Christmas.” Yes, it has been with us for a half-century!

Outside of the feel good energy of the session with “The Muppets” and the raucous fun that ran throughout the panel for “The Goldbergs” (at the end of which co-star Jeff Garlin refused to stop talking, even when the lights went up and his cast mates began to leave the stage) the most talked about show was “Wicked City” (pictured below), a very violent, boundary pushing drama the press has not seen, but which is frequently described with the words “Bonnie and Clyde” and “serial killers.” 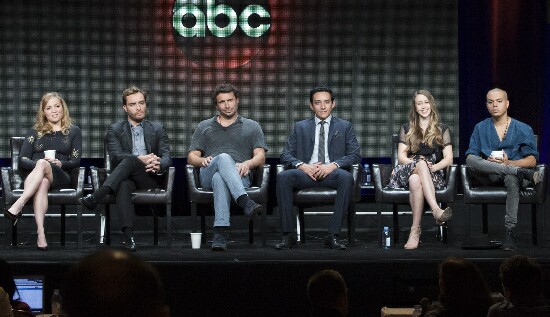 “‘Wicked City’ is going to be deeply intense,” Paul Lee warned. “It’s a show that sort of repels and seduces in equal measure. Ed Westwick and Erika Christensen are really fascinating in [it], and we think it’s going to break some molds. It’s a very interesting show.”

Certainly, the brief clip provided as a teaser for "Wicked" reinforced Lee’s comments. It features Westwick’s character receiving oral sex from a young woman before savagely stabbing her to death. (The Disney Company has come a long way from the days of its beloved founder Walt, about whom we learned a great deal just a few days ago at the PBS session for its upcoming “American Experience” production about Walt Disney.)

When one critic expressed concern about the particular dramatic thrust of that deeply disturbing scene – a curious choice for a clip intended to tantalize the press, or maybe not -- Lee replied, “What I’d love, when we’re ready, is for you to watch the whole show, because really [it] is a fascinating Bonnie and Clyde story between Erika and Ed. It’s the power play between them that becomes so fascinating. What’s so interesting about the show is that you’re drawn to them. You actually root for them, and at the same time you are repulsed by them, and you really don’t root for them. So it’s the relationship at the heart of it, which is really very ABC. What you’re talking about, less so; it’s the heart of that relationship which is so interesting and intense, and it is pushing and pulling you through.”

Interestingly, in the fall ABC's Tuesday schedule will open with "The Muppets" at 8 p.m. and close with "Wicked City" at 10 p.m. It should be quite a night.