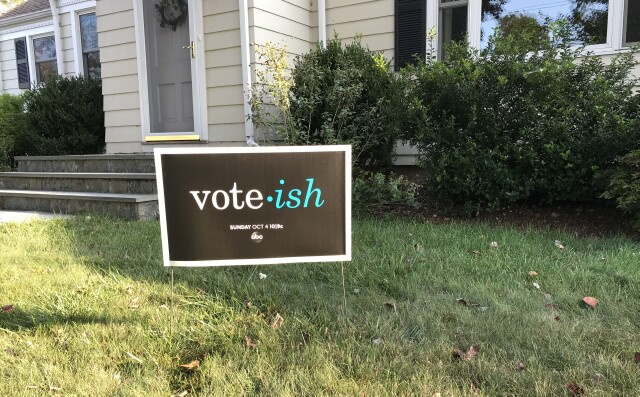 ABC’s black-ish has never been shy about -- or bad at – simultaneously educating and entertaining us about the complexities of being a person of color -- specifically a Black person -- in modern-day America. Its two most recent episodes, presented back-to-back in a special telecast last Sunday, are no different in that regard. (As shown in the photo above, ABC went to special lengths to promote it ... and its message.) The issue of voting has arguably never been a more important one, and while it’s definitely not the only or the biggest issue we all face today, it is one that systemically affects people of color in a negative way, making it exactly the kind of thing that series creator Kenya Barris’ brainchild is used to handling. Much like its previous three episodes (which deal with P.P.D., police brutality, and the state of the country, respectively), the two-part Election Special ran with its theme and delivered straight up facts about America the Great in her current form. It almost reminded us that her past illustrates that she wasn’t necessarily meant to be great for everyone.

The main plot of the first episode (Election Special: Part 1) of the special had to do with Junior (Marcus Scribner), now finally of age to vote, dealing with his first presidential election. Being the idealist he’s always been, he found himself distraught at the revelation that he’s been “purged from the voter rolls,” meaning he’s been unregistered for some reason -- which I honestly didn’t even realize was a thing that could happen -- just to have to re-register in order to once again be able to cast a ballot. He asked his family and did some research looking for answers, and one of the first, most powerful pieces of real information (discovered via a clip from a fictional yet factual documentary) is delivered by Michael Eric Dyson, a Professor of Sociology at Georgetown University, author, radio host and preacher.

The clip, narrated by Dyson, states that “Three quarters of the people who signed the Declaration of Independence owned slaves. Not only were the vast majority of them slave owners, but the founding fathers imposed limits on voting that not only excluded Black people, but all women and non-property holders, as well. When this nation elected its first president, only six percent of the adult population was eligible to vote. That means that ‘We the people’ has never meant ‘all the people.’”

The episode continued to bring the facts via creative information dissemination vehicles like a faux game show called Democracy in Jeopardy hosted by Dre (Anthony Anderson) and took on such huge flaws as the mere existence of the Electoral College, how “One person, one vote” isn’t an actual thing, and how U.S. Territories like Guam and Puerto Rico get all the glory of paying taxes to the U.S. Government without the hassle of actually being able to cast any votes in the first place. There was also a biting bit in which Rainbow Johnson (Tracee Ellis Ross) personified the Voting Rights Act of 1965, looking at what the Act has meant from said year right up until present day. In the beginning, the act was young, upbeat and optimistic, but today it is beaten down by subsequent legislation used to suppress its power, reversing all the good work it had done to keep voting fair over the years.

All of this educational stuff is broken up periodically with carefully blocked appearances from the regulars on the series (six feet apart and all that), and the usual brand of humor that we’ve come to expect from the black-ish team, making the pill of having to learn something while watching TV much easier to swallow. 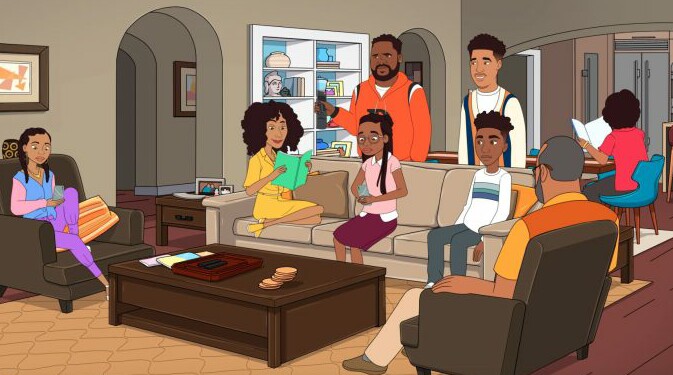 This brings us to Election Special: Part 2 -- an animated episode. This one came right out of the gate fully cartooned. The visual aesthetic of the animation perfectly encompassed the show’s style, once again helping it achieve its crucial balance of light-hearted comedy and real talk. The long and short of this one was that Dre’s boss Mr. Stevens (Peter Mackenzie) decided that since he’s got some money and he’s kind of bored, he’ll run for Congress, much to Dre’s dismay. As explained in the cold open’s voiceover, Dre believes that America has proven itself to be a place where one could be born a peanut farmer but still become the actual President if they had what it takes, but all this move by Stevens is proving is that “what it takes” apparently is being rich and white. When they ask Stevens how he got on the ballet and he literally replied, “I’m a rich white man. I asked.”

I truly dug the way that second episode hit. The animation allowed for visuals that would’ve been much different had they been live action, even from a financial standpoint. The scene where Dre has a full-on nightmare about Stevens winning (which involved stage style lighting and dramatic visuals), or the sequence where Dre ended up on an episode of Showtime’s Desus & Mero (which pre-COVID would have definitely taken place in their actual studio), both would’ve cost a lot more if done in live action. Not needing wardrobe and make-up alone probably saved them a fortune.

I also thought it was dope how Zoey Johnson (Yara Shahidi) was brought back for the episode. Well, her voice was, at least. (She’s been busy of late starring in her spin-off, grown-ish, over on Freeform.) She even addressed it by accidentally calling Junior by her other brother’s name, Jack (Miles Brown). When Junior corrected her, she responded with, “Sorry, kinda been on my own show.”

The collective message of Parts 1 and 2 was that voting, and one’s right to do so unhindered, is of equal importance to all of us, and it always has been. If it weren’t so important, why would history depict a country that has actively marginalized any group that it felt threatened by, for whatever reason? These people had their rights as Americans diluted, made difficult to exercise, or outright denied.

Now more than ever we are all battling in one way or another for what we truly believe in, and as usual, black-ish continues that fight. It remains a show that is and always will be for all the people.