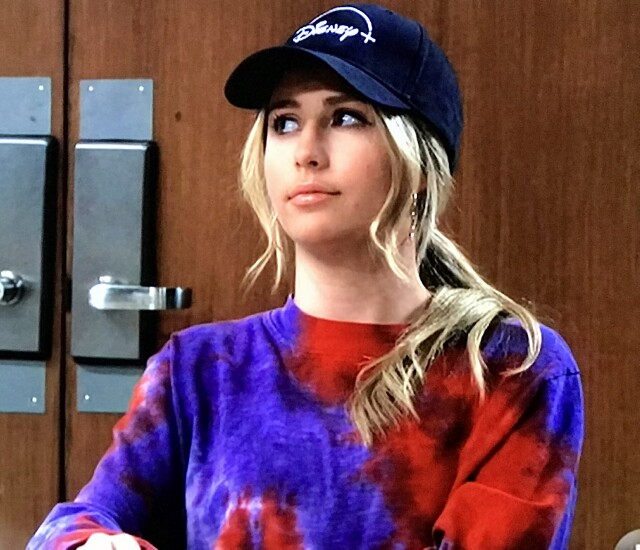 An episode of ABC’s General Hospital  last week featured not one, not two, but three promotional integrations that heavily advertised dramatically different products -- but did so in a way that felt completely organic and not at all disruptive to the narrative.  Given the current advances in digital technology and escalating competition, not to mention the concerns of advertisers, an increase in product placement and/or promotion within entertainment programming seems inevitable.  This episode of General Hospital  could serve as a blueprint of sorts, having shown us three different ways to do it right.

The first of the promotional triple-play in the episode featured Josslyn Jacks (Eden McCoy, pictured at top), the primary teenage heroine on the show, wearing a Disney+ baseball cap during a Breakfast Club-style story that had her in detention with her friends Cam (William Lipton), Dev (Ashton Arbab) and Trina (Sydney Mikayla).  Disney’s spanking-new streaming service wasn’t mentioned -– yet -– but the cap said it all.  And it was totally believable that a teenager would wear a cap with the Disney+ logo on it.

Later in the episode, a scene in detention hall began with a close-up of Ruffles Original Flavor Ridged Potato Chips (the sour cream and onion variety). 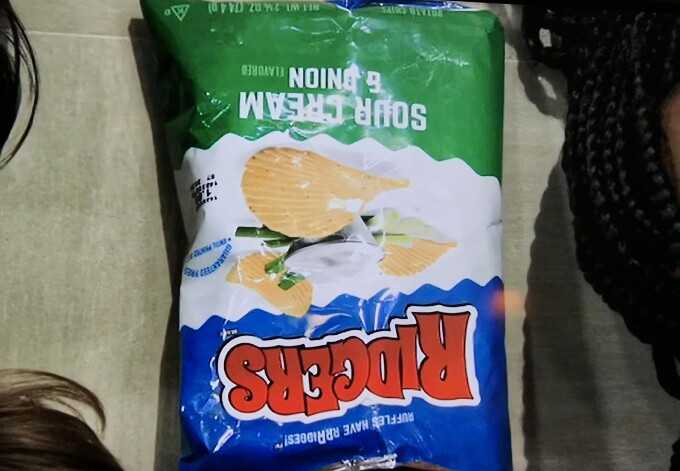 It was immediately clear that the bag was being shot from above, close enough to read the words “Ruffles Have Ridges” that appear above the Ruffles logo on the bag.  Then the camera pulled back, revealing the four teens laying on the floor around the bag, having a debate about potato-chip flavors.  Again, a very believable scene with very organic product placement, though I would like to know if kids allowed to lay on the floor these days when they have detention?  (It’s been a very long time since I had to stay after school, but I recall being made to sit at a desk while serving my time.) 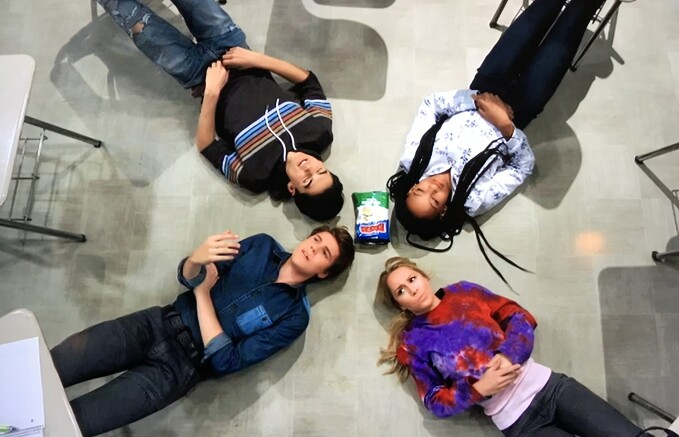 Anyway, the debate about all the different flavors of Ruffles (and other chips) was spirited and not at all typical of forced product placement.   (Notably, the brand name was never mentioned, though the bag and logo were prominent throughout.)  Consider the dialogue below:

Joss:  The question isn’t which potato chip flavor is the most innovative.  It’s which one is your favorite?

Trina:  My favorite is sea salt and vinegar.

Dev:  This may shock you, but I have to agree with Cam.  (Editor’s note: Cam and Dev are frenemies.)  The best chip is the original.  Pure potato with a dash of salt.

Joss:  All four varieties of chips will be available at my Lady and the Tramp screening party.

Trina:  And spaghetti and meatballs!  You have to start with the date scene (a reference to the iconic sequence in the original 1955 animated feature).

Trina:  And don’t say it’s a kids’ movie.  Adorable is adorable at any age.

Cam:  Live action?  So, like, with dogs eating actual spaghetti?

Joss:  Can you please not question how they do it and just enjoy the actual results?

Even though the scene contained a triple promotion it felt much more natural to me than a memorably awkward sequence in September, 2011 when Nurse Elizabeth Webber (Rebecca Herbst), reeling from the death of her little boy Jake (who five years later was found to be alive), talked with another of her sons (the very same Cam from the Breakfast Club episode discussed above) about how much Jake loved ice cream topped with Hershey’s Chocolate Syrup.  And it was easier to roll with than the wacky scene in a July, 2018 episode in which two characters, Maxie (Kirsten Storms) and Lulu (Emme Rylan) were visited by the one and only Colonel Sanders (George Hamilton, for real).  There was also that moment in a May, 2018 episode in which Dr. Kim Nero (Tamara Braun) and Olivia Falconeri Quartermaine (Lisa LoCicero) had a backstage chat at the annual General Hospital Nurses Ball about skin care in general and Olay’s Regenerist line in particular.  It was not as awkward as the Hershey's placement, or as strange as Col. Sanders talking about KFC with residents of Port Charles, but it wasn't as effortlessly natural as the kids talking about Ruffles and Disney+.

On a far more serious note, other scenes in the Breakfast Club episode continued the informative and enlightening "real time" story that began in early 2018 about one character slowly succumbing to Alzheimer’s Disease and the impact it is having on his family and friends.  There was also a scene in which an older African American woman had a frank conversation with her nephew about her concerns over his interracial relationship with the daughter of a prominent attorney.  There was also talk about the annual Quartermaine Thanksgiving, a tradition on the show dating back at least 25 years (even though most of the Quartermaines are deceased).

Indeed, there was so much packed into this episode that it served as a reminder of all the things broadcast network soap operas can be when given a chance, and the unique qualities they share.  So why not do more with them?  Soap operas are arguably the only programming genre broadcasters can still claim as their own.  If smart product placements will help the situation, so be it.  Remember, soaps were created to sell brands from a certain packaged goods category.

As for the dramatic moments in the episode, they proved once again that Max Gail (as Alzheimer’s patient Mike Corbin) and Vernee Watson-Johnson (as his caregiver Stella Henry, a social worker at the title institution and the loving and concerned great-aunt of medical student T.J. Ashford, played by Tajh Bellow), both deserved the Daytime Emmy Awards with which they were honored earlier this year.  In a wonderful full-circle circumstance, Gail and Watson-Johnson are both beloved ABC stars of yesteryear, from Barney Miller and Welcome Back, Kotter, respectively, and now they are back on the network where their careers first advanced, on ABC-owned General Hospital.  Soaps can do that, too.