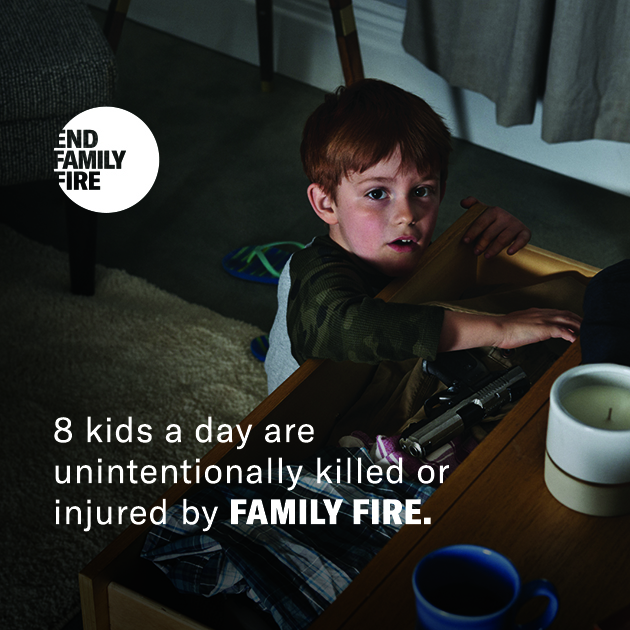 A new campaign from the Ad Council in partnership with the Brady Center to Prevent Gun Violence called "End Family Fire" features a conversation between a boy and his dad in which the boy asks if he can play with the gun in their home and the father explains that it’s not a toy and only there to protect the family.  “But what about the eight kids who get shot everyday by mistake?” asks the boy.  The campaign refers to unintentional shootings with loaded, unlocked guns in homes, which lead to thousands of deaths and injuries of children every year.

As the campaign illustrates, parents may have guns in the home with the intention of protecting their families, not realizing the dangers they may encounter when those weapons are not properly secured and stored away.  This is especially true because children are naturally curious, with statistics citing that 73% of kids under nine know where guns are stored in their homes.  The Brady Center and the Ad Council feel if the “End Family Fire” message does its part, and parents safely store their guns, then nearly 3,000 children can be saved each year.

Getting involved with this campaign was a no-brainer as the Ad Council has a commitment to taking on the most critical social issues our nation faces.  In the case of “End Family Fire” the organization is taking on a silent national crisis that injures or kills eight children every day.  “Together with Droga5 and the Brady Center, we saw a unique opportunity to leverage the power of the communications industry to introduce the new phrase “family fire” to raise awareness of this hidden crisis and what parents can do to protect their families,” said Lisa Sherman, Ad Council President and CEO.

The Brady Center tapped Droga5, which developed the creative idea behind “End Family Fire,” including an interactive website, EndFamilyFire.org, and films for the campaign that will launch today (August 8 -- or 8/8) to signify the eight kids killed or injured each day.  “Despite extensive evidence to the contrary, 63 percent of Americans believe that owning a gun makes a home safer," said Duncan Marshall, Founding Partner, Droga5.  "The Brady Campaign came to Droga5 with the goal of decreasing this number and ultimately saving lives, an opportunity we couldn’t pass up.  In partnership with the Ad Council our nonpartisan approach is solely focused on safety, and we hope to help educate everyone about the dangers and risks that come with keeping guns in a home with children."

Ever since the NRA began backing candidates who opposed gun regulations in the name of the Second Amendment gun control has been a partisan issue and very contentious.  By extension, the idea of telling people what to do with their firearms, even in the name of safety, seems to cause controversy.  “Wherever we live or whatever our politics may be, we can all agree that it’s critical to help save children from the dangers of 'family fire,'" Sherman said.  "Given the gravity, urgency and scope of the issue, we expect this campaign to receive strong support.”

Along with the Brady Center, the Ad Council and Droga5 has a broad coalition of partners including the Gun Safety Alliance, Veterans for Gun Reform, Doctors for America, the PTA, faith-based organizations and many other military, medical and hunter groups that will help promote this message on a local level to generate support.  A host of media companies have also come onboard with commitments already secured from Fox Networks Group, Bustle Media Group, Refinery29 and the Condé Nast portfolio, support and outreach from Zenith USA.  Many marketing leaders, influencers and talent are also planning to support the campaign.

Beyond the media spots, audiences are directed to the "End Family Fire" site for additional resources, including tips for safe storage like not storing ammunition and a gun in the same location or using a gun lock.  The site prompts parents to initiate gun safety conversations with their kids, since it’s likely they have already located the guns in their homes.  The site also highlights home protection alternatives to guns, such as alarm systems and guard dogs.  Lastly, families can access the “End Family Fire” gun safety tool kit.

The opinions and points of view expressed in this content are exclusively the views of the author and/or subject(s) and do not necessarily represent the views of MediaVillage.com/MyersBizNet, Inc. management or associated writers