Adult Swim's "Rick and Morty" is a Crass and Clever Trip 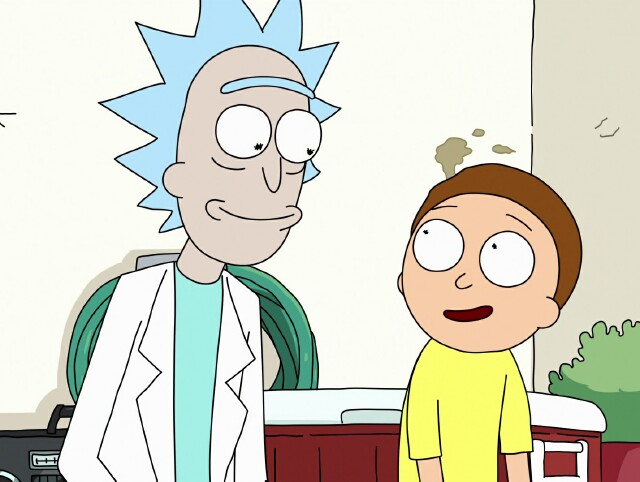 Last week, I attended the Adult Swim Upfront party – where Rick and Mortyimagery and toys and things were everywhere – and I had the pleasure of meeting Roiland, who was extremely cool.  (That's him below left with his animated pals and yours truly on the right.)  I now understand how he became 50% of the dynamic duo that created this comedy masterpiece.  Besides being a show that’s action-packed, limit-pushing and filled to the brim with great jokes that are a perfect combo of crass and clever, it’s also a multi-layered and (somewhat) satirical commentary on normally serious topics like science, existentialism and the human condition.  Simply put: Rick and Morty is the shit. 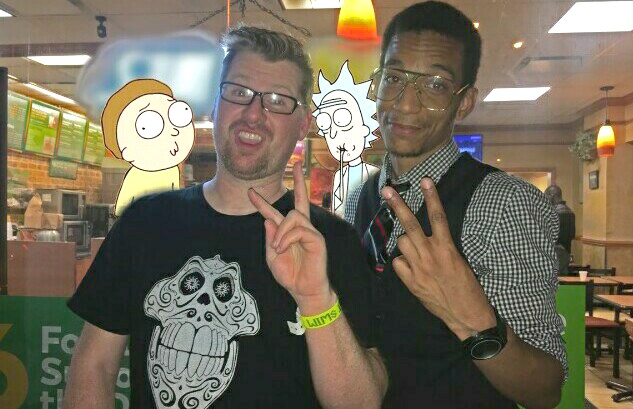 Originally, Rick and Mortywas a Back to the Future-inspired parodistic animated short called The Real Animated Adventures of Doc and Mharti.  It was pretty funny, but also way more obscene than anything the show would do now. This early version had a much less elegant aesthetic that legitimately looked like it was drawn by either a very talented toddler or a very drunk adult.  It starred Doc, an eccentric (and sort of creepy) scientist who had a young, kind of dumb kid named Mharti as his de facto sidekick. Humor-wise, it was a lot like similar NSFW animated shorts that were gaining popularity back when the Internet was young but also becoming a common fixture in everyday homes.

To call Doc and Mharti a diamond in the rough would’ve been … generous … but through Roiland and Harmon’s combined efforts the show matured.  Adult Swim picked it up and it became the instantly legendary hit it is today.  Roiland, who voices both of the series’ titular characters, was already doing some amazing vocal work on another of parent Cartoon Network’s popular (and decidedly less adult) animated series: Adventure Time, providing the vocals for several characters from the Lemon kingdom, a mythical destination in the magical Land of Ooo. Hear him bring his character Lemongrab to life and it’s easy to see the connection between the energetically bizarre delivery of his lines on Adventure Timeand the overall outlandish tone of Rick and Morty.

On R&M,Rick is a belligerent genius, mad scientist and high-functioning alcoholic.  He’s also Morty’s grandpa.  Morty, on the other hand, is a pubescent middle-school student who struggles with academics.  Rick regularly takes Morty on dangerous trips to alternate dimensions, and he’s constantly berating him.  He also uses his grandson as a means to whatever end he’s pursuing whenever a self-serving opportunity presents itself.  But deep down Rick loves the kid, and as the series has progressed that has become more and more apparent.  Morty is the viewers’ connection to the show’s reality, because (like us) he’s the only who knows the details of their exploits.  Yes, Morty’s dim, but he’s also loyal, curious and has a good heart.  Rick is his polar opposite -- he’s selfish, reckless and downright mean most of time.  Still, they have an unbeatable dynamic that’s only strengthened by the fact that they’re relatives.  No matter how viciously hurtful their arguments may get, they’re still family.  Together they have encountered alien assassins, multiple universes, otherworldly cable TV channels, sentient couches, inter-dimensional organizations and more.

Beneath the surface this show is much deeper than it initially appears.  Rick’s arrogance and bravado are actually a facade for his deep self-loathing.  He’s secretly depressed, probably because of something he did in his mysterious past.  Rick is the most wanted man in the multiverse, so it’s safe to assume that whatever he did was pretty bad.  At times it’s heavy stuff, but fortunately the philosophical commentary always plays second fiddle to adventure and comedy.

I could write a paper on this show.  It’s thatgood.  I haven’t delved into Rick’s alcoholism yet, or how his true motives are constantly questionable. I haven’t even begun to unpack Morty’s relationship with his sister Summer (Spencer Grammer) or the failing marriage of Morty’s parents Jerry (Chris Parnell) and Beth Smith (Sarah Chalke).  And then there’s the influence Dan Harmon’s style of storytelling has on this show and the thematic similarities said style shares with Community.

Sure, this is a cartoon, but it’s got everything: emotional depth, well-crafted plots, deep philosophical questions and flat-out raunchy sci-fi humor.  It takes a special type of person to bring something like Rick and Morty to life.  Currently, the rest of the show’s fan base and I have waited over a year for Season 3, and although our collective hunger was briefly sated by the April Fools Day release of Season 3 Episode 1, I think I speak for all of us when I say we’re eagerly awaiting Rick and Morty’s glorious return.