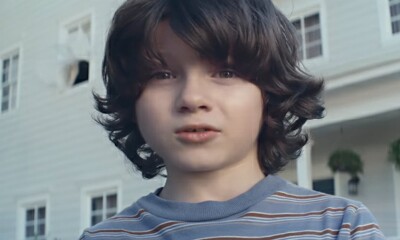 Nationwide Insurance during Super Bowl XLIX did something I would not have thought possible just a few days ago. It toppled GoDaddy as the most sensibility and sensitivity challenged company of the year.

With memories still fresh of GoDaddy’s remarkably bone-headed decision (later reversed) to run an ad during the Super Bowl about a little dog falling victim to heartless puppy breeders, Nationwide dropped a genuine death-bomb during the big game, proudly showing off Make Safe Happen, a spot about the terrible toll that accidents in the home can take on little children. As handsomely produced as any other spot we saw on Sunday, it proved increasingly horrifying to sit through, with vivid imagery of terrible accident aftermaths (including the one pictured below) that may or may not have killed children when they occurred.

Only one thing was certain: The sweet little boy narrating the ad never got to do any of the things he dreamed about doing as a child because he was stone-cold dead!

And just like that, thoughts of the little GoDaddy puppy disappeared into the ether, eclipsed by a crushing sense of sadness and despair. Emotional connection made? Check. Big fun of the Super Bowl viewing experienced compromised? Check. Millions of Americans prompted to talk about dead children? Check. Nationwide Insurance associated for the foreseeable future with same? Check.

An added bonus: Nationwide accomplished all of that during the highest rated television program in the history of the medium!

Days later the insensitivity of the Nationwide and GoDaddy spots still boggles the mind. Dozens of people (spending millions of dollars) were involved with each, all of them presumably enthusiastic about what they were doing. These people are likely educated and well-compensated and must have proven themselves to be above-average workers and executives before being let anywhere near the creation and execution of an all-important Super Bowl spot.

Collectively, the Super Bowl XLIX commercials were underwhelming, to be polite about it. They had me daydreaming about those ads of old in which young women leapt about trying to catch snack foods in their teeth and beer drinking bozos suffered painful blows to their junk.

In the interest of fairness I’ll say this: This year’s batch of ads may have suffered in the shadow of one of the best Super Bowl games and most entertaining half-time shows in recent memory. (Special praise goes to the latter, with Katy Perry and guests offering a series of impressive spectacles cleverly conceived to engage viewers of all ages without offending any of them. When was the last time that happened? Also, it had dancing sharks! If I worked at Syfy I would be scrambling right this minute to orchestrate a cameo by them in the upcoming “Sharknado 3.”)

Amid all the sappy dads and dead kids and imperiled animals (I’m talking about you, Budweiser) I thought the best commercial was for the Chevy Colorado, which began with the television picture and sound appearing to suddenly go off (much like the final moments of “The Sopranos”). I can’t speak for the viewing public at large, but at the Super Bowl party I attended the entire room erupted. Just as panic was about to set in Chevy eased us back to normalcy. We all laughed. This was as simple and straightforward as a commercial can get. It certainly commanded everyone’s attention.

Other standouts included the Snickers riff on “The Brady Bunch” with Danny Trejo as Marcia and Steve Buscemi as Jan (which was stranger than strange but still worked); the ad for the BMW i3 (pictured below) with Katie Couric and Bryant Gumbel (pure genius: how did they even know a clip of Couric and Gumble expressing confusion about the Internet over 20 years ago even existed?), and the Coke commercial in which the iconic soft-drink turned legions of Internet haters into lovers, a very well-timed spot given all the fun people were having on Twitter tearing into so many of the Super Bowl ads.

Speaking of which, once again I have to say “Thank God for Twitter.” It has brought a very welcome level of added entertainment and engagement to live television events, especially tiresome awards show, but also to Super Bowls. It seemed to me that many of the tweets I read during the game conveyed messages more clever and concise (in 140 characters or less, with or without pictures) than many of the commercials I was watching.

It may be that because of the giddy urgency of the connection between Twitter and the commercials, I made almost no time at all for Animal Planet’s Puppy Bowl, Hallmark Channel’s Kitten Bowl or Nat Geo WILD’s Fish Bowl. When I did click over I liked what I saw. Then again what’s not to like? I’ll bet if there were 24-hour puppy, kitten and fish channels they would generate higher ratings than some of the content on television today.