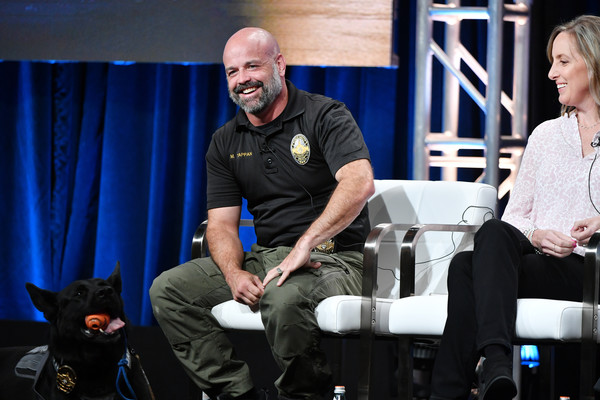 A+E Networks on the first full day of the 2019 Summer Television Critics Association tour presented back-to-back panels for two can’t-miss shows -- an upcoming canine competition series on A&E titled America’s Top Dog featuring four-legged officers from Live PD, and the upcoming Lifetime movie Patsy & Loretta, about the friendship between country music superstars Patsy Cline and Loretta Lynn, played by Megan Hilty and Jessie Mueller, respectively.  A+E didn’t have a lot of time at the tour -- only one hour and 15 minutes -- but they made a very strong impression with those two shows while finding room to also present a panel with the stars of an upcoming Viceland comedy series titled Danny’s House.

Before presenting the shows, A+E Networks President of Programming Rob Sharenow shared how much A&E has grown of late.  “At a time when the top 20 cable networks are down by double-digits, A&E is actually up by double-digits, marking nine consecutive quarters of growth,” he declared.  “It’s the network’s longest growth streak in 20 years.  Last month A&E was the No. 1 cable network in adults 25-54 and No. 2 in 18-49, which was our highest monthly ranker ever in that demo.  We’ve done that without sports, without off-net sitcoms and without mega-studio movie packages.  A&E’s success is completely built on original, unscripted and live programming.”

That may sound like typical basic cable cheerleading, but it really is unusual for any ad-supported cable network to grow like that without any of those tent poles.  Coming up on A&E, Sharenow said, are a four-hour documentary on country superstar Garth Brooks, a “reimagining” of the network’s series Psychic Kids and the relaunch of former Syfy smash Ghost Hunters.  Live PD, he said, continues to be the No. 1 show in cable every Friday and Saturday night.

After making more than 220 episodes of Live PD, he noted, it became clear that the K9s on the show were captivating viewers.  “They have their own fan clubs and fan pages,” he said, “so we decided to give them their own show.”  The result is America’s Top Dog, which is already being referred to by some critics as American Ninja Dog Warrior.

“The series features some of the best canine cops and their handlers from across the country including some fan favorites from Live PD alongside highly trained amateur dogs as they compete on a specially designed course that tests their agility, speed and skill,” Sharenow said.

“It’s not just a show about police canines,” said executive producer Dan Cesareo, who is also EP of Live PD and A&E’s Live Rescue.  “There’s an underdog in each of the episodes.  Sometimes the underdogs really surprise you, and it’s a ton of fun to watch and see.”

There is high drama, as well, especially in some of the backstories of the participating dogs.  Sgt. Mark Tappan, on stage with his K9 partner Mattis, recalled a harrowing experience.  “Back in 2016, we were pursuing a bad guy, and the bad guy jumped off a retaining wall.  I thought the retaining wall was about ten feet high, so I started to jump as well.  Mattis was off leash running next to me, and I realized that the bad guy was still falling when I started to make the jump, and I caught myself, and my heart stopped because I saw my partner, in slow motion, floating through the air downward towards the bad guy.  He landed on top of the bad guy, and he wasn’t on a bite command so he just guarded him.  We were able to take that guy into custody.  I went down and did a quick check of Mattis to see if he was okay.  He didn’t have any structural problems, but then we got in a foot chase with the other bad guy who had run, and we caught up to him.  That guy gave up as soon as he saw Mattis, which was probably pretty smart.  Then Mattis collapsed.”

Tappan paused.  At that moment you could hear a pin drop in the ballroom at the Beverly Hilton Hotel, site of this TCA tour.  Every critic in the room was on the edge of his or her seat.  That’s partly because, while at TCA, journalists enjoy a long break from their spouses, children and/or significant others, but they miss their pets like crazy.

“Mattis had, from the initial fall, sustained a lacerated liver, and I had to rush him to get emergency surgery, and they opened him up,” Tappan continued, choking up a bit.  “[They were the worst words] you ever want to hear as a canine handler.  What I love about this show is it does highlight the relationship that everyone is talking about.  This dog is with me all the time, 24/7.  He’s my best friend on the planet.  I love this dog so much.  The words I remember, and I’ll never forget, were, ‘We need to get him into surgery right away.’  That’s a heart-stopping moment.  They were able to get him in and patch him up.’  He was back to work within a month.  It’s kind of a neat comeback to be able to do something like this and show off his skill set.”

(Editor's note:  We are pleased to report that he is happy, healthy and ready for his close-up, as you can see in the photo at top of Mattis, Sgt. Tappan and executive producer Holly Wofford at top.)

“When we see [police dogs] it’s usually under a high-stress situation or a bad situation, and people have this negative stereotype,” said Curt Menefee, the host of America's Top Dog.  “They don’t realize … [Mattis] is Mark’s family dog.  [Police dogs] are normal, everyday dogs that people have as their pets and they take them home and they’re like us.  They turn the switch on when they’re at work.  When they’re at home, they’re just pets.  They’re friendly and they play with the kids and those kinds of things.  It was really important for me at least to highlight that in this show.  We have so many negative images of police dogs in our minds but it’s not always like that.  They’re not always ready to bite people.”

Executive producer Holly Wofford explained the format of the show.  “In every episode there are five teams,” she said.  “Four are police teams.  One is a civilian team.  We call them the underdog teams, [but] there’s probably nothing underdog about them.  They compete in three different rounds of competition, three different obstacle courses across each stand-alone episode.  Over the course of these three rounds we lose one or two in every round and ultimately, we have our one winner.  In our final episode we bring back the top competitors, and they’re competing for the title of ‘America’s Top Dog.’”

Dogs are always a tough act to follow.  Fortunately, the session after Top Dog, for Lifetime’s Patsy & Loretta, featured two of the most talented women working in the entertainment business, Megan Hilty, who plays Patsy Cline, and Tony Award-winner Jesse Mueller, who plays Loretta Lynn.  The Q&A with the two of them, along with executive producer Neil Meron and others, breezed by, but at the end Mueller and Hilty belted out songs popularized by the legends they portray.  And just like that, interest in Patsy & Loretta soared even higher.