A&E's "Live PD" Is a Siren for Viewers, Brands 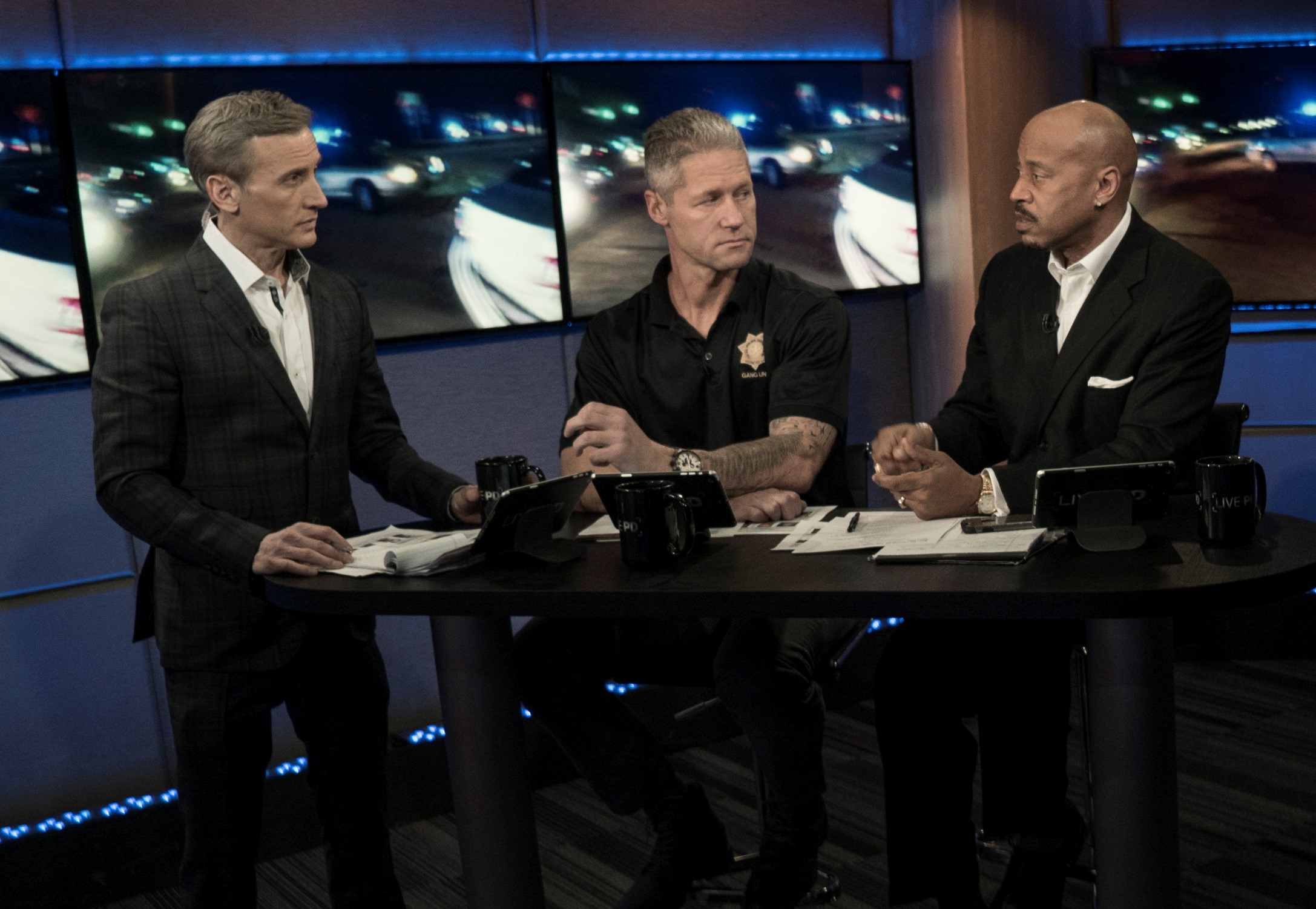 Talk about getting a front seat to the action: A&E's police documentary series Live PD follows law enforcement in eight cities, live for six hours over Friday and Saturday nights to a growing following.  At a time when viewers are time-shifting and binge-watching TV to fit their schedules, Live PD,now in its third season, is a rare event deserving of appointment viewing status.

Produced by Big Fish Entertainment, Live PD is expertly hosted by three industry vets -- Chief Legal Affairs Anchor for ABC News Dan Abrams, Sgt. Sean "Sticks" Larkin of the Tulsa Police Department Gang Unit and longtime America's Most Wanted Senior Correspondent and Producer Tom Morris Jr. (pictured at top, left to right). It is a bona fide hit for A&E, averaging 1.8 million viewers, and according to Nielsen it ranks No. 1 in its time slot against other general entertainment networks.  It boasts tremendous grassroots support, with viewers creating social media groups tagged #LivePDNation, producing their own videos and hosting live viewing parties.  Such engagement is attracting a growing roster of brands supporting the show on TV and online.

With a hit on their hands, A&E's Brian Joyce, Senior Vice President of National Ad Sales, and Live PDhost Abrams spoke to MediaVillage about how the show taps into the public zeitgeist, why viewers are so devoted and the trifecta of value it delivers for advertisers.

Alli Romano:  Both in TV and podcasting, true crime and investigation are hot genres.  What is it about Live PD that taps into this passion and resonates so well with your viewers?

Brian Joyce:  This show, with a live format traveling to eight different cities and a command center and hosts, is a brand-new type of program.  When I grew up, we went to Radio Shack and bought a police scanner.  You'd sit there with your friends and listen to what was going on with local law enforcement.  This show is like the scanner on steroids.  The hosts, Dan, Sticks and Tom, each have legal or law enforcement backgrounds, and are likable.  They bring a lot of credibility and context, keeping the flow going.  This is not easy to pull off; six hours live a week is a tremendous operation.

Dan Abrams:  It really can be a bit addictive.  You can watch for an hour and have no idea you were watching for that long!  The fact that it isn't always high octane, but you don't know what is going to happen next, makes it truly unique.

Romano:  Dan, you have a deep background in TV news and legal affairs.  What attracted you to this show?

Abrams:  I have long thought body cameras made a lot of sense for police officers, and the idea that we could watch them just doing what they do, in real time, was a very appealing concept.  But I have to say that the show has been even more fun than I expected.

Romano:  There's been a lot of attention recently on police body cameras and dash cameras.  How much do you think that is fueling interest in the show?

Joyce:  When this show launched in 4Q 2016 there was a lot in the news about police and transparency, and I think that's another reason this show does so well.  When you watch the news, you're seeing what law enforcement goes through half a percent of the time.  The nature of this program offers full transparency into what our men and women of law enforcement are up against the other 99.5% of the time.  With the right formula, and A&E's reputation for real and authentic series, viewers show up.

Romano:  How are you using digital media to augment the show?

Joyce:  We have short-form content on YouTube and that has tremendous traffic.  We've even taken content that the fans have posted and pushed that out across our social channels.  Some fun content has been posted from fans during their Live PDviewing parties.

The social following has been organic, too.  Fans came together soon after the launch and formed a social community on their own called #LivePDNation.  It's now over 120k strong and continues to grow.  Our social team works to amplify that excitement and make it even bigger.  Twitter just came out with its 2018 rankings and Live PD is one of the top 10 most-tweeted shows.  Saturday Night Live is No. 1, The Voiceis No. 6 and Game of Thrones is No. 9.  That's amazing company to keep.

Romano:  How has your advertiser support grown over the three seasons?  How are you working with clients to create innovative campaigns?

Joyce: Since Live PD launched we have tripled its advertisers.  We work with sponsors in developing custom content that surrounds the Live PD experience across all platforms.  A good example of this is our use of creative bumpers that lead into commercial breaks.  [For example] the Canine spots are fun and light-hearted and have had a lot of demand.  Plus, some partners have leveraged our talent (Tom Morris Jr.) and our social following to build deeper engagement beyond just our Friday and Saturday telecasts.  The exciting thing about Live PD is that we are in premieres 44 out of 52 weeks a year!  It's a big ask of our production teams, but also a lot of opportunities for our advertisers to align with new engaging content.

Romano:  How does the success of Live PD compare with some of your past hits and how is that translating to ad sales?

Joyce:  This show launched in Q4 2016 and by second quarter of 2017 the ratings had doubled.  By the end of Q3 2017 we were approaching 1 million A25-54  impressions.  That's tremendous growth.  I've seen this happen before with certain shows like Dog the Bounty Hunter, Storage Wars and Duck Dynasty.  You get these hits and they just take off on their own.  What's interesting about Live PD is that as the ratings grew the quality of audience dramatically improved.  The average household income shot up from $46,000 up to $57,000.  When you have quality of audience, scale and such an engaged fan base like we do, you have the hat trick.

Romano:  As part of your outreach do you also integrate public service into the show?

Abrams:  Yes.  We continue to do our "Missing" and "Wanted" segments that help police departments around the country find suspects and victims. Tips from Live PD viewers have helped law enforcement to recover seven children and led to 12 fugitives being caught.  The police departments appreciate their assistance and we are always so proud (and relieved) when the "Live PD Nation" helps bring a child home or a suspected criminal to justice.