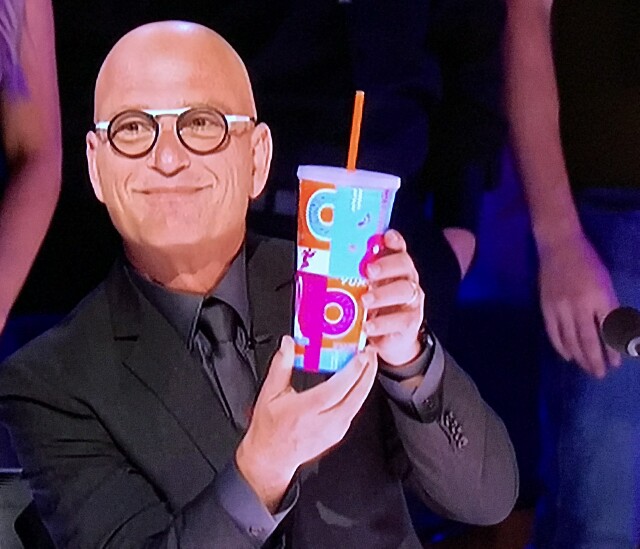 It’s that time of year again, when I sit back and enjoy the best examples of smart network scheduling and smart corporate branding, comingled into one viewing experience.  There is no more carefully managed series on television than NBC’s America’s Got Talent, which next week will conclude its 14th season as a summer smash.  And not since the ‘50s, when stars would appear on camera promoting their sponsors’ products before or after telecasts of their programs, has there been as impactful an in-show advertising strategy as that of Dunkin,’ whose logo has become synonymous with AGT.  (Dunkin’ until recently was known as Dunkin’ Donuts, but the word Donuts has disappeared from its stores and its advertising and remains only in the company’s long-established url, dunkindonuts.com.)  Seriously, if you ate a munchkin every time you heard or saw the word Dunkin’ during an AGT telecast you would slip into a diabetic coma by episode’s end.

I’m not judging the ever-expanding menus offered by Dunkin’ (or any other “fast-food” franchise).  I am, however, praising the integration of all things Dunkin’ into all things AGT.  I have called attention to this before, but every season I am increasingly impressed.  It’s all in the details. 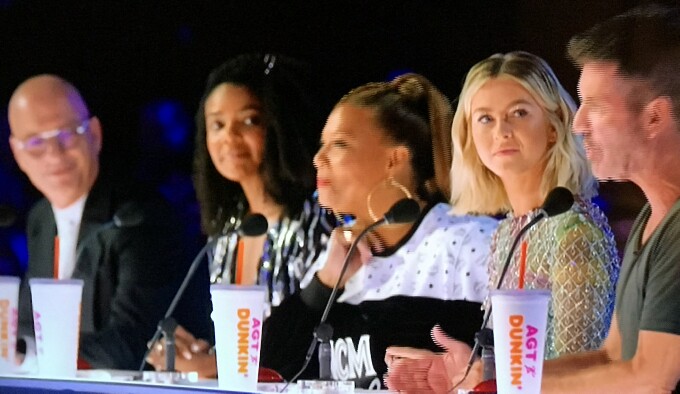 For example, the colorful Dunkin’ Donuts cups that sat in front of each judge at their table in the past glistened like jewels, impossible to miss over and over throughout each show.  This season the cups were a bland white, but they were emblazoned with the Dunkin’ and AGT logos, which might not have popped against a bright color.  What a smart way to get that “just Dunkin’ message out.  Further, Dunkin’ ran a “Design-a-Cup” competition during the season, taking further advantage of that display on the show.  Last night, when the last five of the Top 10 finalists were identified, the winner of the cup competition – a young woman named Mollie Hanselman from Kansas City, MO – was seated right up front at the Kodak Theater, the venue from which live editions of AGT are telecast.  “If you have really been paying attention, you have noticed that the judges’ have new cups on the desk tonight!” host Terry Crews declared.  How could they not?  (That's judge Howie Mandel holding the winning cup at top.)

That isn’t the only way Dunkin’ engages the AGT home audience.   Throughout the final weeks of each season viewers are encouraged during live episodes to download the AGT app, or go to its web site, and vote in the “Dunkin’ Save.”  It’s their chance to rescue talented individuals who were not voted through to the next round by the audience.  Crews – arguably the best of the many hosts this show has had – talks about the Dunkin’ Save throughout those live episodes. 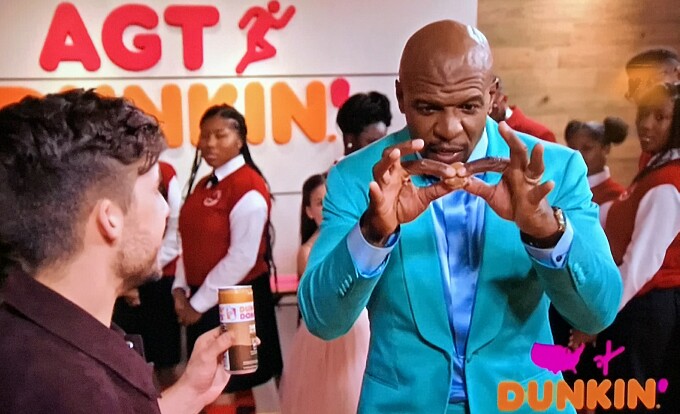 And then there’s the Dunkin’ lounge (pictured above), where Crews, the judges and many of the contestants go to play in segments that might be described as interstitial programming/advertisement hybrids.  Whatever you care to call them, they are easy to sit through and have never prompted me to channel surf.  Dunkin’ logos and products literally fill the screen, but it doesn’t matter.  These segments may not be entertaining, but they are engaging, and they get the sponsor’s messaging across without pushing viewers away.  It’s not unreasonable to assume that many viewers might have found themselves suddenly craving an ice-cold coolatta on a hot summer night.

The results are clear:  AGTstill runs on Dunkin,’ and Dunkin’s got talent.

As for the smart scheduling thing, even during the revolving door of management and corporate ownership changes that have defined NBCU during the last 15 years everyone has been wise enough to leave AGT alone.  In tandem with American Ninja Warrior it virtually powers the network through the summer months, beginning in May at the “end” of the “traditional” broadcast season and running right through to the start of the next one.  What a fantastic promotional platform for the network’s new and returning series and other summer shows.  And what a perfect summer experience AGT has proven to be.  We follow the stories of its contestants from May through September, and when summer ends, so too does the latest chapter in each of their narratives.  There are undeniable emotional connections in play, which explains why the final shows of each season can be both exhilarating and heartbreaking at the same time.  We’ve been rooting for these people for months, and we can’t help but feel something as their journeys end.

How smart it has been of NBC to keep a powerhouse program on in the summer, where it began, rather than shifting it in-season (though earlier this year a special Champions edition of AGT ran in the winter months).  Changing up hosts and judges along the way hasn’t hurt, either.  That’s a continuous example of long-term planning at its best, and the results continue to pay off for everyone involved.