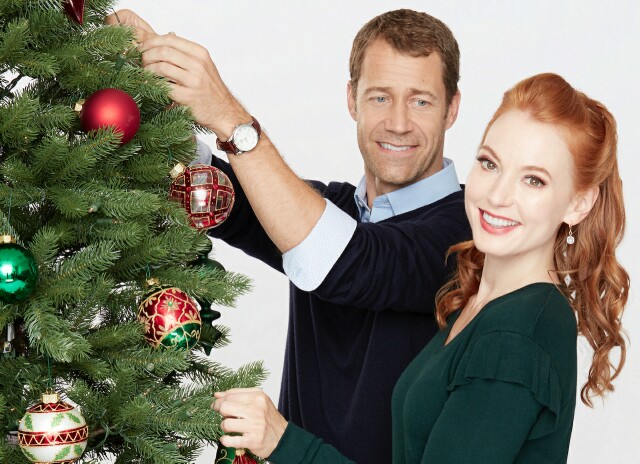 It wouldn't be Christmas for the legions of devoted Hallmarkies without Alicia Witt.  For the past five years, holiday movies featuring the versatile actress have collectively become a Hallmark Christmas tradition to many -- and this year that tradition continues with the premiere of Christmas on Honeysuckle Lane, her first for Hallmark Movies & Mysteries.  "This is my sixth consecutive Hallmark Christmas movie and it's an honor beyond anything I can describe to be a part of people's traditions," Witt told MediaVilliage during an exclusive interview.  “I can't think of anything more sacred than families gathering at Christmas and what they choose to watch.  I don't have a lot of Christmas traditions, so I guess my Christmas tradition is making these movies.  I can't imagine a year in which I don't make a Hallmark Christmas movie because I look forward to making them as much as people look forward to seeing them.

"There's a sense of beauty about family getting together on the holidays and making memories like, ‘What did you do on Christmas?”  ‘What were you watching as the tree was being decorated?’” she continued.  “It gives me chills to talk about it, but truly, all year long if I'm at an airport or in a mall people will come up to me with very real emotion to say, ‘You are a part of my family's Christmas tradition every year.  We can't wait to see your new Christmas movie and it wouldn’t be Christmas without you and we've watched A Very Merry Mix-up each year since it came out.’  That's amazing because I remember what Christmas movies meant to me when I was growing up."

The switch to Hallmark Movies & Mysteries for this year's tradition was not something calculated on Witt's part.  Rather, it was the film's heartfelt script that hit home.  "Certainly while filming it we felt a depth, which was an unusual grief and emotion not normally seen in Hallmark Christmas movies," she explained.  "I instantly fell in love with it.  As an actor, sometimes projects just find you for a specific reason.  I was very moved by the whole story and it resonated deeply.  It made me cry the first time I read it and the second time." 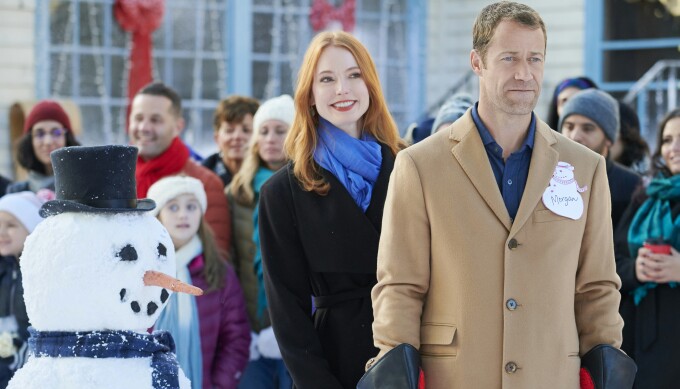 In Christmas on Honeysuckle Lane, Witt stars Emma Morgan, a recently single New York lawyer who returns to Oliver Wells, Virginia, to spend time with her siblings, Andie (Laura Leighton) and Daniel (Jordan Dean).  The reunion is bittersweet, as the siblings mourn the loss of their mother and possibly their last gathering in their beloved family home.  While in town, Emma meets local antique dealer Morgan Shelby (Colin Ferguson, pictured with Witt above and at top), whose criticism of the blue-ribbon Christmas wreaths Emma’s mother introduced is not well received.  It's not until they are forced to team up for a snowman building competition that the ice between them begins to melt.  However, things get complicated when Ian (John Palladino), her ex, descends on the festivities hoping to make amends.

“I have a dear friend who’d just lost her mother, maybe within a week of my receiving this script,” recalled Witt.  “My parents are very much with us, so it was something I was feeling by proxy.  Emma didn't resolve a lot of issues with her mother before she passed, and both were so stubborn they let it go on for years. “My mom and I haven’t always seen eye to eye,” she continued.  “We have a great relationship, but there is always ‘stuff.’  I think it’s common to a lot of mothers and daughters.  I'm hopeful [the film] will give people those Christmas vibes and inspire some much-needed conversations with loved ones.  I was also drawn to the idea of making a movie [about a character] with siblings -- it wasn’t just Emma out there on her own.”

According to Witt, the assembled cast made the project a joy.  “This was an important element of the film,” she said.  “We bonded instantaneously and in a way that's rare on a film set.  This group was together every night we could be. All we all wanted to do was hang out; after we wrapped, we kept a group text going for weeks.  [That’s] incredibly rare and I am still in touch with everyone.”

She was delighted that “A Christmas Miracle,” her newly penned holiday song (now available on iTunes) was also featured in the film.  “[The song] is also a little sad,” she explained.  “It makes me think of military families as it's about someone you love very much not being with you for whatever reason at Christmas time.”

Witt hopes her own Christmas this year will be filled with decorating her new Nashville home with friends.  And she’s already hard at work on her next Hallmark Christmas movie.  “This one I wrote the story to, so it's based on my original idea,” she beamed.  “It'll be my first produced thing as a writer, which is very exciting, and I'll be writing an original song to perform on camera as the character sings.  I love that Hallmark was the first to step forward and actually make it happen.  They’re open to listening to their actors.  It's been wonderful working with them as a producer and developer.”

Christmas on Honeysuckle Lanewill be telecast Saturday, November 24 at 9 p.m. on Hallmark Movies and Mysteries as a part of its Miracles of Christmas programming event.