Alison Sweeney on the Popularity of Hallmark's "Chronicle Mysteries" Franchise 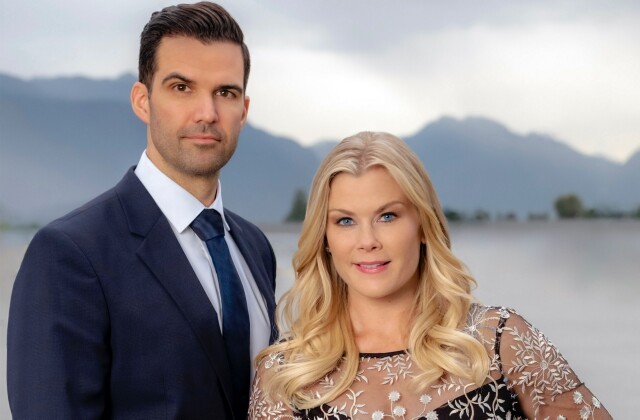 Chronicle Mysteries: The Deep End, the fourth and final installment in the initial batch of podcast-driven dramas for Hallmark Movies & Mysteries, premieres this coming Sunday.  Starring Alison Sweeney, this franchise burst out of the gate in February of this year with three well-received premieres, and when MediaVillage spoke with her about the first one (Chronicle Mysteries: Recovered) being so different in tone from Hallmark's usual fare, the actor, creator and executive producer wondered how they might be received.  Sweeney had a lot riding on their success, and when viewers whole-heartedly embraced the character of Alex McPherson and the gang at The Chronicle newspaper, she couldn’t have been happier.

“It's always nerve-wracking when you try something different and go outside the box a little,” Sweeney admitted during an exclusive interview with MediaVillage.  “I was nervous.  I wanted them to do well.  I wanted to do [the network] proud and make movies that people wanted to see.  In the end, everyone just wants the audience to enjoy it.  So, there’s always that struggle of finding an audience interested in something a little more intense.”

In the new installment, Alex finds herself embroiled in a podcast about a woman accused of murdering her husband.  While it’s fairly certain she will be convicted, Alex believes the evidence doesn’t quite add up to murder.  And with the trial in progress, time is of the essence if Alex wants to see justice prevail.

“What I love about the podcast premise in general and the ones that I listen to [in real life] is they can choose whatever case they are interested in at that moment,” she said.   “In this one, we went for a more current, urgent case where Alex is really trying to help her listeners understand what the prosecution's version is, along with what the defense's version is.  Drew (Benjamin Ayres, pictured above and below with Sweeney) is also covering it for the paper, so I loved the feeling of the ticking clock and that Alex has to get to the bottom of it in time.  It was really fun to get the whole group working together and have Alex feel that sense of family and unity, and that's something she notices.

“We feel really good about the movies we have made,” she continued.  “They were exciting, while still very much in keeping with the Hallmark family brand, which is very important to everyone, including me, being a family person.  It was fun to challenge myself and my writer Melissa (Salmons) to create something that would give the audience thrills, excitement, danger and mystery all rolled into one.” 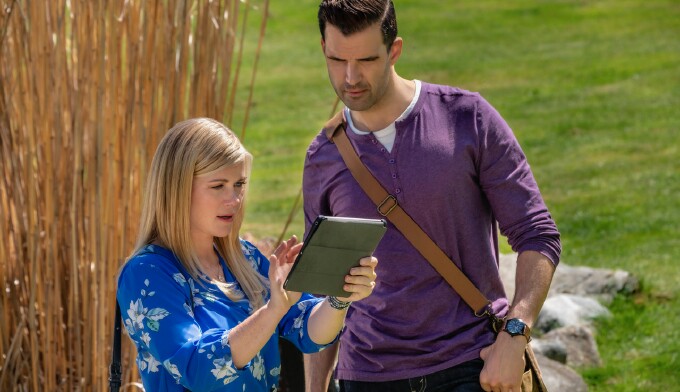 After starring as Hannah Swensen in the hugely popular Murder She Baked movies for the network, Sweeney spent two years developing and cultivating the podcasting world of Alex McPherson.  While romance was a through-thread of the Baked series, she relished the opportunity to put mysteries front and center of the Chronicle franchise, at least for a while.  “I think [viewers] look for the right balance of romance and mystery,” she said.  “Some audiences really want romance while others don't.  That’s hard to develop, and I'm glad I don't work on that side of things.  So yeah, it's hard to find the audience that wants more mystery and less romance because you do get conflicting comments online.  Some are more anxious for romance, while others are like, ‘Just get on with the mystery because we want to know what happens.’  I do find myself constantly trying to balance the two.”

Viewers might notice a few changes with Alex in this installment.  Indeed, she makes one important life decision that could possibly alter her working relationship with Drew and open a door to romance.  “The chemistry between Drew and Alex is really cute, in that they have that ‘opposites thing’ that as a viewer is really fun to watch,” she explained.  “I love rooting for them to see each other, and that they’re so well-matched even though they don't see it themselves sometimes.

“You want to give the audience a reason to hope,” she added.  “But at the same time, you have to be really careful about them getting too close too soon, as that takes the fun away from the dynamic.  It's a legendary thing -- Moonlighting, Lois & Clark, Ross and Rachel on Friends-- so, we're really taking it one script at a time.  It's hard to get romantic [when you’re] worried someone’s out to get you.  But hopefully, at the same time, the audience can be hopeful of something to look forward to.  That’s an important element of what Hallmark offers and is enticing to watch again and again.  Just the support for the ‘would-be’ couple who ‘might’ get together.”

Seems fans will get the opportunity to see that relationship develop.  Sweeney is back at work on a fifth Chronicle mystery with plans afoot for a sixth.  She’s also not ruling out the possibility of fitting in a Hallmark Christmas movie this year.  “It's been two years since my last,” she recalled.  “I get [asked] that a lot, but the truth is the year isn't over yet, and anything is possible, so don't count me out.  It's been a little crazy this year as I took a girl’s family trip to South Africa where we had the most amazing adventure.  Then, of course, my husband and son were like, ‘What about us?’  But I'm back at work now, and I promise I won't let you down.”