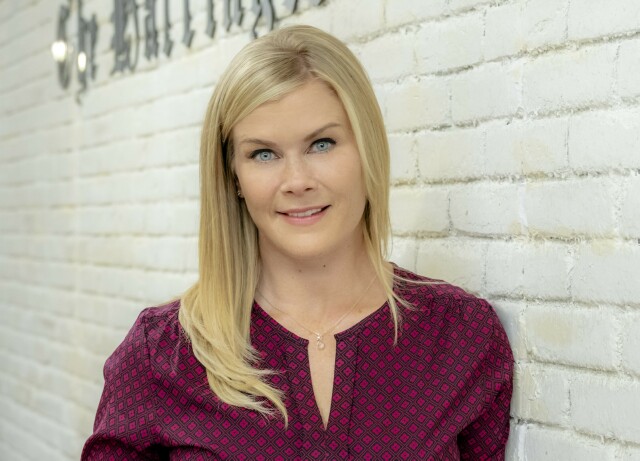 Hallmark Movies & Mysteries returns to its mystery roots this weekend courtesy of a brand-new franchise -- Chronicle Mysteries.  Created and executive produced by and starring Hallmark favorite Alison Sweeney (pictured above), Chronicles follows the investigative adventures of Alex McPherson, a true-crime podcaster hot on the case of the disappearance of her childhood friend Gina DeSavio some 20 years ago.  Believing Gina could still be alive, Alex enlists the aid of local newspaper editor Drew Goddard (Benjamin Ayres, pictured below), and as the duo dig deeper the scope of the mysterious disappearance widens more than either could have ever imagined.  Sweeney, who took a two-year on-screen break to devise and film the first three movies in the franchise (to air over three consecutive weekends), is delighted for fans to finally see the first installment -- Chronicle Mysteries: Recovered.  “I’m so proud of these movies,” Sweeney beamed during an exclusive interview with MediaVillage.  “Hallmark was thrilled and loved the idea of the Alex character, and the world that I had developed.  In fact, I pitched them one movie and they said, ‘How about three?’  I was like, ‘Oh gosh!’  We went from one to three, which was pretty intense, yet an awesome and crazy experience.

“Hallmark jumped in with both feet, which was so exciting,” she continued.  “What I think they responded to was that it ratchets up the tension a little and offers the audience a little more [viewing] diversity.  The ones you love are still there, but if you want something a little grittier, while still within the Hallmark brand of what's important to them and you can still watch with your kids, these definitely have more of an edge to them.” 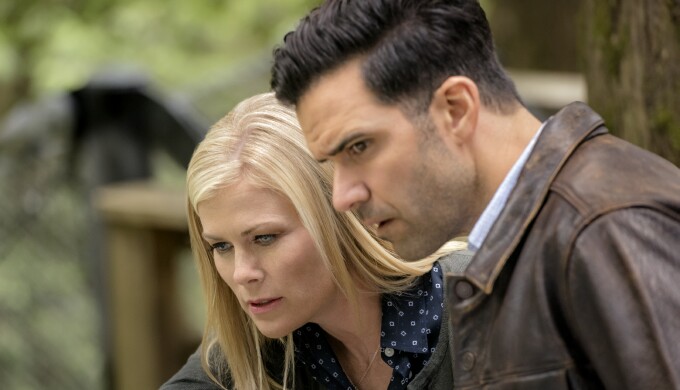 With their Dick Wolf procedural feel, tonally the Chronicle Mysteries are a refreshing departure for the network.  That’s something Sweeney, a devotee of true crime podcasts herself, hopes viewers will enjoy.  “I don't think you need to curse or have gore to tell a good story,” she said.  “Don't get me wrong; there are plenty of shows I enjoy like that, but I'll leave those to HBO.  I'll do my thing and tell a great cold case file mystery, without anyone having to cover their eyes. That's hopefully equally compelling.”

According to Sweeney, listening to her first podcast, Serial, sent her down the rabbit hole she’s still in.  “I don't think I spoke to anyone for eight hours,” she laughed of that initial introduction.  “Then I discovered Undisclosed, and by then you might as well give in.  I commute in Los Angeles, so there's a lot of opportunity to listen to them.  I can't tell you the last song I actually heard as podcasts are all I listen to.”

While the actress was sad to see her previous successful franchise, Murder She Baked, come to an end, she’s grateful for the takeaway.  “Murder She Baked was so much fun,” she shared.  “They made me see what I loved about the mystery genre and things like watching Perry Mason with my mom as a kid.  They offered clues you could follow along with and Murder She Baked offered a world of characters you cared about that all offered a skill set to help solve the mystery.  “In the true crime podcasts that I listen to, there is an armchair detective element that audiences want to follow along with, and Alex is an armchair detective herself, so it's something in the zeitgeist now,” Sweeney continued.  “Podcasts can make a difference and raise awareness of these cold cases that have sat for decades.  There's something important about them and to celebrate them was such an awesome opportunity for me.”

In real life Sweeney doesn’t host a podcast.  She’s considered it, but after being a guest on so many, she already feels immersed in the medium.  Researching the character of Alex allowed her to justify her obsession.  “My husband asked what I was doing [listening to all these podcasts],” she laughed.  “I just replied, ‘research for a new project.’  I see myself as my audience.  I’m that soccer mom, even at Days of Our Lives.  I loved it as a kid and still do.  So to bring that feeling of being a fan of a genre to my work, and how fans would react, mattered to me.

“I get it as I feel the same way,” she added.  “It’s the same with true crime and making a show I would want to watch.  One that would be satisfying to me as a true crime junkie and as a fan of Hallmark.  What could I bring that is something as a viewer I would be invested in?  The gold standard with any script I read is – would I watch this?  Hopefully, my standards are high enough that the fans will enjoy it.”

Both Hallmark and its loyal fan base are important to Sweeney.  Thanks to their belief in her she’s creating content she’s proud of and amassing quite a collection of caps.  With four more movies in the series planned, she’ll be busy for a while.  “I’d love to direct one day,” she revealed in closing.  “But that’s a lot of work and an extra cap that I don’t have room on my head for.  Still, as an EP I get to give new directors an opportunity and for me, that’s a blessing.”

Chronicle Mysteries: Recovered, the first movie in this new series, will be telecast Sunday, February 17 at 9 p.m. on Hallmark Movies & Mysteries.