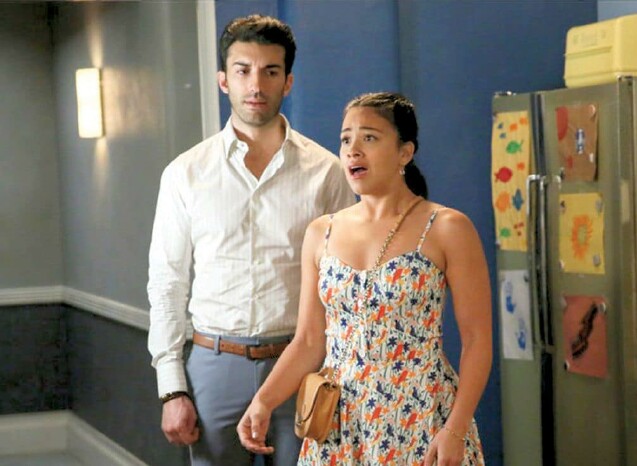 Friends, it isn’t often that American networks attempt to adapt a Spanish-language telenovela, likely out of fear that the very specific brand of comedy will get lost in translation or the premise will be too much of a departure from their usual programming.  The CW, however, took that risk back in 2014 with Jane the Virgin, an American adaptation of the Venezuelan telenovela Juana la Virgen.  The satirical dramedy follows Jane Gloriana Villanueva (Gina Rodriguez), her multigenerational family and the many outlandish situations that occur in their lives.  Coming from a telenovela-obsessed family, Jane has been a true pleasure to watch.

Now in its fifth and final season, Jane made clear from the start of its end run that all bets were off when Jane's husband Michael (Brett Dier), who had been deceased for three years, returned from “the dead.”  We learned that his death was faked by big bad crime boss Sin Rostro and that he suffered from severe amnesia and took on the persona of Jason, a slow-talking cowboy from Montana.  (The story has already moved on from there.)  The series is chock full of melodramatic tropes that are traditionally used in Spanish telenovelas, but they are balanced by the many charms of the talented cast.  Indeed, those heartfelt and hilarious performances are exactly what continues to keep us glued to our seats.

The show's initial and subsequent plot lines over the years may sound outrageous on paper.  A devout virgin is accidentally artificially inseminated with her boss Rafael’s sperm.  Rafael (Justin Baldoni, pictured at top with Rodriguez) finds out his mother is actually a crime boss.  Jane discovers her biological father Rogelio is a famous telenovela actor.  Jane’s abuela reconnects with her first love and marries him to help him get a green card to visit his ailing mother.

It’s a lot, I know.  But in the multigenerational Ayala household, we love it!

One of my favorite moments so far this season is in “Chapter Eighty-Two,” which Rodriguez also directed, when Jane delivers a nearly eight-minute monologue in one continuous take, allowing her to finally pour out all of her thoughts and feelings about her husband being back from the dead and the problems that causes for Rafael and her.  Outlandish?  Of course.  But Rodriguez’s grounded performance of a driven and strong-willed young woman (and the skills of her equally fine co-stars) always makes the stories work, even when they go way over the top.

What Janeborrows from the decades-old telenovela format is what it also turns on its head to create something special, relevant and refreshing.  The way Jane becomes pregnant is as wild as anything in other telenovelas, but through those circumstances, new light is shed on a number of topics that aren’t talked about in those shows -- like dealing with postpartum depression, the complications of co-parenting and Jane’s struggle with balancing motherhood and her career goals.

Jane the Virgin is particularly important to me and other Latinx individuals because it is among the small handful of shows with a Latinx at the center, including The CW’s Roswell, New Mexico and Netflix’s On My Block and One Day at a Time,which was recently cancelled by Netflix.  Janeis particularly unique because of how much of the show is in Spanish.  Practically all of the dialogue written for Jane’s abuela Alba is entirely in Spanish, with Jane responding in English, which I find very funny because that is how a lot of families speak to each other, including my own, in Spanglish.  The show is also wonderfully authentic when it comes to depicting a strong and loyal family and a religious one at that, as the vast majority of Latinx are Catholic or Christian, and loyalty to family is often placed above all else.

One of the best comedic elements of the show is the unseen “sexy Latin narrator” who gives the recap at the beginning of each episode, and his thoughts/reactions to the goings-on throughout.  More often than not, the narrator says exactly what the audience is thinking, or in some cases shouting at the TV, with hilarious one-liners.  Who’d have thought an omniscient narrator would be one of the funniest characters on a show?  I think I’ll miss him most of all.

The depiction of strong and independent women throughout the series is also a wonderful breath of fresh air, because in many telenovelas and soap operas women are often depicted as helpless damsels in distress, while Jane, her mother Xiomara and her abuela Alba have all persevered in their lives despite their hardships.  Xiomara had Jane at a very young age and raised her alone while Rogelio pursued his career and is now fighting cancer with support from her mother and daughter.  Alba and her husband came to the United States as young adults and stayed in the country past their visa dates to raise their children in a better, more prosperous country.

Jane the Virgin’s critical acclaim is clearly well-deserved, and it breaks my heart a bit to see it come to an end, as it has broken barriers for Latinx actors, female-driven series and shows centered around families of color.  However, with Jane the Novela currently in development, I hold out hope for a continued success to what could be a fantastic new franchise.  The CW still dares to defy.

The fifth and final season of Jane the Virgin is telecast Wednesdays at 9p.m. ET on The CW.