"All in the Family" -- Beloved Classic or Necessary Evil? 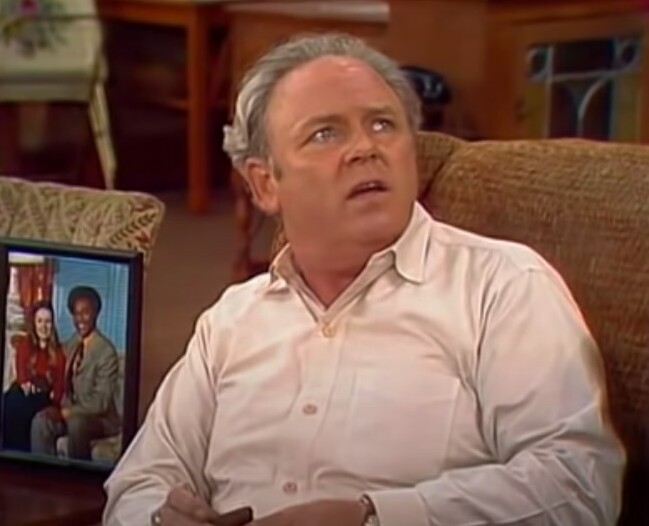 The groundbreaking sitcom All in the Family turned 50 last year, and while it has been endlessly applauded for its ballsy (at the time) approach to television, and revered for its revolutionary subject matter and style of delivery, I've got to say, it was a mighty tough watch for me. Don't get me wrong, there's no way to objectively deny this show's status as an industry trailblazer, but I'd be lying if I said that All in the Family meshed well with my Millennial sensibilities. You want the short version? I'm not the hugest fan of Archie Bunker, but -- and it's a big "but" -- the man who played him, Carrol O'Connor, may have actually been one of the culture's greatest allies.

For those of you who aren't old enough to remember anything that happened before the internet came along, All in the Family is an American 1970s sitcom created by TV legend Norman Lear and Alan "Bud" Yorkin. It starred O'Connor as super bigot Archie Bunker, Jean Stapleton as his wife Edith, Sally Struthers as his daughter Gloria, and Rob Reiner as his son-in-law Mike Stivic. It followed the day-to-day goings on of an apparently realistic working-class American family. Remember, back then American viewers were much more familiar with the wholesomeness of TV families like the Bradys or the Cleavers, and not so much with a television show that basically held a mirror up to their own (probably racist) homes.

Fast forward to the present day, and I'm watching hours and hours of this show trying to see what the world saw back then. You know what I saw? A super racist old white guy who represents everything I'm against. Then I thought about CBS's The Neighborhood and something I said about it back in 2018.

In The Neighborhood, a white family moves into a predominantly Black neighborhood and is met with resistance by their gentrification-wary next-door neighbor, Calvin. Most of the show is some version of Dave (Max Greenfield) just trying to befriend Calvin, and Calvin (Cedric the Entertainer) just treating him like crap. It's pretty funny. Point is, what I said was this: "The same way that one might imagine being in the opposite sex's shoes when considering how sexist something is, I imagined how I'd feel if Calvin's character were a white man. Suddenly his immediate disapproval of Dave and his fam felt a lot more unsettling."

You know why? Because now I realize Calvin is just a Black Archie Bunker, and guess what? Archie was a racist, sexist piece of sh*t with this "heart of gold" that everyone keeps talking about but that I've been too busy being offended to find. I've programmed myself to shut people like that out and take solace in the idea that one day society will leave their ancient and bigoted ways behind, like the ignorant dinosaurs that they are.

However, that realization alone did make me reconsider one other thing: Archie Bunker was as important to the development of the television landscape as he was racist, and he was racist as hell. I mean, we're talking about a guy who bragged about banding together with his racist neighbors and voting to not allow a Jewish family to move into their neighborhood (this is literally like, season one). This is a guy who openly threw out more slurs than I honestly care to type right now, and belittled his wife, daughter and her husband on the daily. He also blindly trusted the government, and regularly displayed that unique brand of entitlement for which out-of-touch old men are known. But again, I realized eventually that all of that was … necessary.

Not too long ago, comedian Roy Wood Jr said during a set, "You know, one white ally that goes unsung, in my opinion, is evil white [characters] in civil rights movies." Now of course, he'd go on to talk about Leonardo DiCaprio's contributions to the film "Django Unchained," but that train of thought got me thinking. The villains who do the best jobs make me hate their characters, which ultimately serves the greater purpose of the art. Robin Williams' character in Mrs. Doubtfire was, honestly, a financially irresponsible man-child who violated a court order, but Sally Field's portrayal of his ex-wife, Miranda, made him seem like a lovable goof and her like kind of a dick. The story needed that. If Django's eventual victory was to mean anything (spoiler alert, I guess), then DiCaprio's villain had to be, like, the racist, which meant that Leo was going to be saying the N-word a lot.

So, for people to see the error of Archie's ways, they first must see him err, and the reason this show has even been revered for so long is because of the honest conversations that were being had on the series, and now in front of America. No one was talking about rape, or divorce, or gay rights, or women's lib, or the "No Jews in our neighborhood" meetings that apparently took place, because TV was too busy trying to convince us that every white dad was Mike Brady, and that every white cop was just like Andy Griffith in Mayberry.

Maybe sitting through an episode of All in the Familynow isn't as much fun for me as it was for viewers back than because I have much more up-to-date and relatable content available to me. Maybe the reason that content is able to exist at all is because of the fact that All in the Family opened the door for shows like itself to exist (a trend that would eventually spawn work like the aforementioned The Neighborhood,among many others), and maybe the reason that any of that stuff worked at all is because Carroll O'Connor gave us the villain that we needed him to be.

So, if after 50 years of impacting American culture this show's greatest achievement is the space it would eventually create for other works to push the envelope and address the issues they feel that they must, then I'd say that all of that would have been impossible without Carroll O'Connor being the ally we all needed by giving us the villain we all hope to one day live without.

Check out Ed Martin's column about All in the Family.