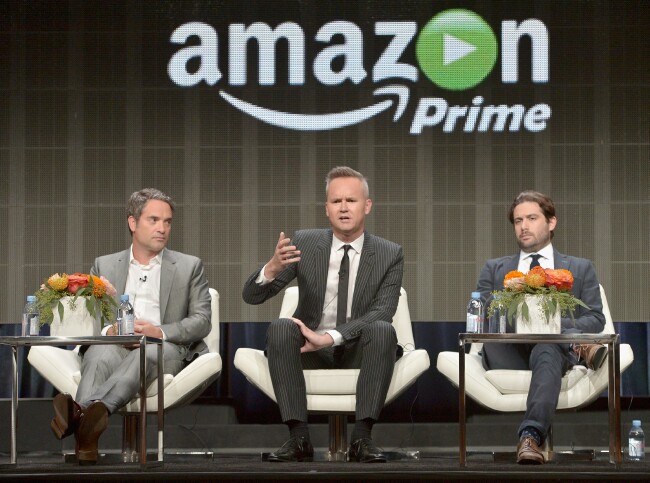 Amazon Studios delivered a memorable presentation yesterday for a number of reasons – not all of them good – at the Summer 2015 Television Critics Association tour. On the upside: It offered five lively panels for compelling new and returning programs the likes of which prove just how far Amazon has come in the streaming content arena in a relatively short time. Collectively, its shows were perhaps the most interesting seen at this tour so far and will probably retain that distinction by the time it ends later next week. On the downside: When they spoke, Amazon Prime’s top executives seemed strangely unrehearsed for actual questions about some of their shows. Worse, Amazon started its presentation a full half hour later than planned and continued it well beyond its arranged end time – a TCA taboo which in this case put Amazon in conflict with a special TCA event planned by 20th Century Fox Television.

First the good news: Amazon did a fine job showcasing five of its series, including the returning critical sensation “Transparent” (pictured below) and the little seen charmer “Mozart in the Jungle,” which will hopefully gain some traction with the media and with viewers when its second season debuts in January 2016. It even stoked interest in two possible future shows: “Sneaky Pete,” created by David Shore and Bryan Cranston and starring Giovanni Ribisi and Margo Martindale and “Casnaova,” starring Diego Luna.

The three new shows it presented were “Hand of God,” an intense psychological drama about a judge who suffers a breakdown, falls under the influence of a shady preacher and believes that he can communicate with the Almighty, starring Ron Perlman and Dana Delany; “The Man in the High Castle,” an alternate-reality thriller set in a version of 1960s America after Nazi Germany and Imperial Japan won the second World War, starring Rufus Sewell, and “Red Oaks,” a dramedy set in 1985 at a country club in New Jersey, which one of its stars, Jennifer Grey (pictured below left), described to critics as what might be produced if “‘Caddyshack’ and ‘Dirty Dancing’ had a baby and it was raised by John Cassavetes.’"

The casts of four of these shows were assembled on stage for very lively press conferences, with the “Mozart” group appearing via satellite from New York City where production of season two of the show has just begun. Overall the programming portion of the morning was a big success; it certainly helped that Amazon provided a lavish breakfast ahead of time and ample refreshments throughout. In a smart touch, tables throughout the International Ballroom at the Beverly Hilton were draped with orange cloth, making the room feel like someplace new. Also, Amazon provided print material at each seat filled with helpful information about each show and individual featured that morning. Many networks now put all of that information online and then complain when critics spend entire sessions with their heads buried behind their laptop lids. That isn’t the only reason critics are busy on their laptops during press sessions given the state of the world today, but still …

Now the not so good news: Amazon’s executives did not come across as well as their talent. As their session went on they seemed to lose the room.

It might have had something to do with the reaction from Head of Amazon Studios Roy Price (pictured center at top with Morgan Wandell, Head of Drama, left, and Joe Lewis, Head of Comedy, right) to the first questions of the session, which were all about “Top Gear” and the untitled Woody Allen Project. Actually, the questions were about the men behind the shows.

Asked by one critic about Amazon’s decision to hire the former stars of the BBC’s “Top Gear” for a new car show, including Jeremy Clarkson, whose time there ended amid a swirl of allegations about racial slurs and other bad behavior, Price simply said, “They’ve produced a great show for many years. I think there’s a lot to focus on other than [negative]. We feel very bullish that it’s going be a fun show that their fans around the world are going to love.”

“With all due respect,” the critic continued, “I’m sure the BBC felt that way, too. But they constantly had to either apologize or explain away comments that they made during the show about Mexicans, about Asians, about women. Have you had discussions with them about what they can say and what they can’t say, or are you just going to hope that they don’t mess up again?”

Price was quick with another non-answer. “You know, I can’t comment on all of the details of our discussions or contracts or anything like that, but we are bullish about the show, and we think it will turn out well,” he said.

Moving right along, another reporter asked about Amazon’s deal with Woody Allen and any concerns the company might have about the scandals that have permeated his personal life.

“Woody Allen is one of the greatest filmmakers America has ever produced, and people are going to be talking about Woody’s films for a long, long time,” Price praised. “When we talk about what … would be a great inspiration for a show, a lot of Woody Allen films kept coming up. So then we just thought, ‘Well, what if we actually asked Woody Allen himself to do a show?’ That was really our focus.”

But what about the “issues” he’s had, one critic wanted to know. Did Amazon take them into account?

“You have to look at the whole picture, you know, take everything into account,” Price said. “Our focus is on the fact that he is a great filmmaker and storyteller, and so we look forward to the show in 2016.”

As noted above, Amazon’s morning started a half-hour later than planned, at 9:30 rather than 9. That may not sound like much of a problem, but most days at TCA tours are tightly scheduled and significant overruns are simply not permitted when they cut into time allotted to another network or studio. In this case, Amazon blunted the travel time scheduled for critics and reporters who were set to leave the hotel in time for a 1 p.m. lunch with the cast of ABC’s “Fresh Off the Boat,” which had been organized by the show’s studio, 20th Century Fox Television.

I’ve seen such overlapping at past TCAs -- some of it deliberate and reckless (which is not how I would describe Amazon's actions). Long ago Court TV brazenly steamrolled right over the opening minutes of an HBO presentation; more recently Univision blocked the press from the first 20 minutes or so of an Ovation panel. As a result, both Court TV (which few critics cared about) and Univision (which many critics want to know more about) were banned indefinitely from future TCA tours. The 20th Century Fox Television event was “optional,” as opposed to the HBO and Ovation events mentioned above, so perhaps the impact of the Amazon overrun was minimal enough to not warrant similar action.