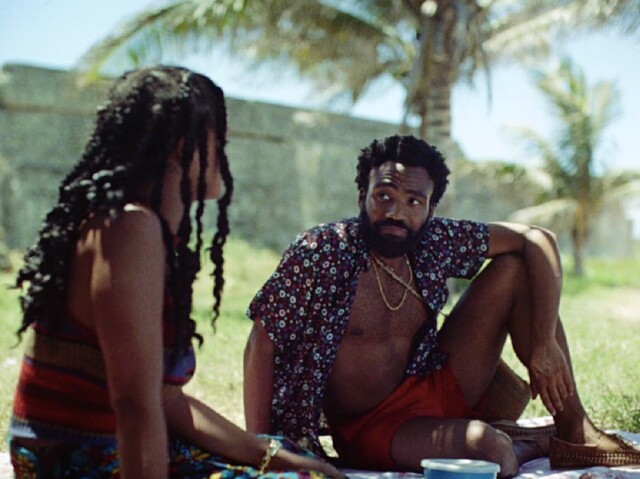 Donald Glover, a.k.a. Childish Gambino, might be one of the hardest working men in show business right now, but that didn’t stop him from dropping his self-proclaimed “tropical thriller” Guava Island on Amazon Prime a couple weeks back. Directed by Hiro Murai (one of Glover’s partners on Atlanta) and co-starring Rihanna, this 55-minute foray into life on this fictional island is filled with vibrant color, beautiful music and a clear(-ish) message.  But … is it any good?

Amazon subscribers currently have an opportunity to screen this surprising yet unsurprising musical gem, and while I’m a fan of damn near everything Glover does, when it came to this project, I did have a couple of mixed thoughts.  (Warning:  Minor spoilers ahead!)

First off, I knew absolutely nothing about this film going in.  Advertisements pretty much boiled down to a wide shot of a kitchen in some island setting with an appropriately dressed Gambino and Rihanna standing opposite one another.  The vibe was obvious: Rihanna, some island, Gambino shirtless with a guitar … I get it.  And that was essentially what I got. There is a small amount of animation that bookends the story, which I’ll admit threw me off a bit, because the idea of being an adult who was bait and switched into watching an animated feature infuriated me.  Fortunately, I was mistaken, and before I knew it, actual people were on screen. 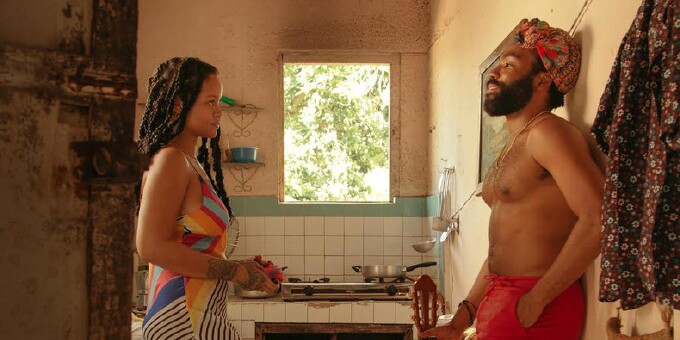 This movie is more or less a love story between Glover’s character “Deni” and Riri’s character “Kofi.”  Both are inhabitants of Guava Island, a tropical paradise where the people are fully employed and controlled by Red Cargo company, which is run by, you guessed it, a man literally named “Red Cargo” (played by Nonso Anozie).  Kofi works as a seamstress; Deni is a performer who provides what seems like all the entertainment on the island.  His plan is to hold a festival for the hard-working people of Guava on Saturday, the day they were supposed to have off. But Red wants them to work on Sunday, something that won’t happen if everyone parties the night before.  The events that follow do so in a pretty predictable way.

I loved the way this movie looked.  Murai definitely did his thing, the same way he does on all the projects of Glover’s that he directs (which include most episodes of Atlanta and a number of Glover’s music videos).  However, I’d argue that in this case, the island itself did the heavy visual lifting.  One would have probably had to go out of their way to shoot that location (Cuba) “wrong.”  Murai’s genius did truly shine during moments of implied danger or intense suspense, though.  The suspense of implied danger existed more as a slowly growing vibe than it did as a specific collection of moments or camera angles -- which historically fits Murai and Glover’s collective M.O. -- but I’ll get back to that.

Rihanna is billed as Glover’s co-star, and while the idea of their love story being the main character is a nice one, I feel like these two superstars only shared the screen for less than a handful of scenes.  Of the unshared portions, I’d say easily more than half went to Glover.  Also, Rihanna sang no songs, something that was never promised to us but I kind of expected anyway.  I mean, Gambino sang a bunch and I only half expected that.

The rest of the music was blended pretty organically into the existing setting of Guava, just as the charismatic Deni seemed to mesh well with everyone he interacted with.  Deni is a smooth, soulful, entertaining guy, and the soundtrack (at least three songs of which are pre-existing Childish Gambino singles) matched perfectly with the perma-summer vibe of this sunny beach-laden island.

Guava Island’s screenplay was written by Donald’s brother Stephen Glover, who once again found himself in familiar company.  (Stephen also wrote at least half of the first two seasons of Atlanta.)  The Glovers and Murai have been a team for a while, and with this project it felt no different – which is why, even without knowing anything about the film, I found myself silently dreading what I knew probably wouldn’t be a happy ending.

To mirror a sentiment from a previous piece on Glover and Atlanta, the Glover-Murai-Glover trifecta has a modus operandi that usually involves the creeping approach of something terrible, or moments of happiness and comfort upended by the sobering reality of how f**ked the character we’re watching is.  This is not to say that Guava Island is in any way a downer, and I’m definitely not saying that it’s any way near suspenseful enough to feel like a proper horror flick.  In fact, it mainly appears to be a fairly light-hearted semi-musical adventure -- beautiful people making beautiful music in a beautiful place -- but, in true G-M-G fashion, that beauty, even if just for a moment, will at some point be opposed by an ugliness that rivals its energy.

All in all, if you love Childish Gambino’s music, don’t worry -- your hunger will be more than sated.  But if you’re not here for the singing, that’s cool, too.  Fortunately for you this is more of a movie with music than it is a musical movie (even if it is only by a hair).  I enjoyed my little visit to Guava Island very much, but in the same way that (as the story tells) Guava exists in a place somewhere between love and war, so does this film exist somewhere in a place between something I’d rave about and something I’d just mention.

Oh, and Letitia Wright is in it, too -- which is pretty dope.