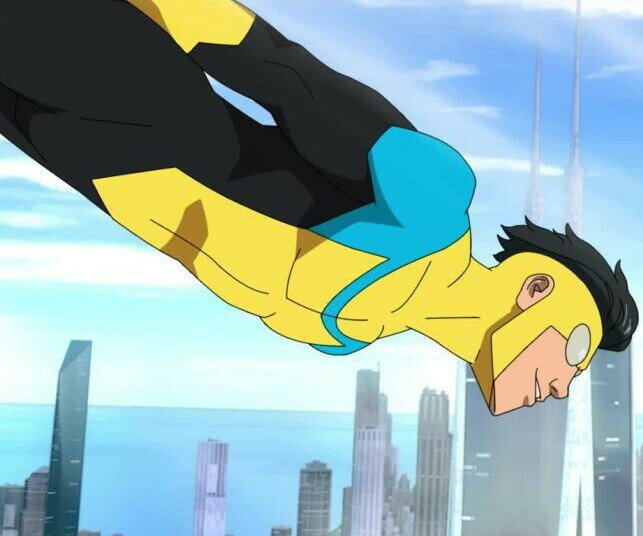 Amazon Prime Video's sizzling hot animated series Invincible follows the adventures of an eponymous teenaged superhero who only just recently got his superpowers. Created by Robert Kirkman (the same man who created both The Walking Dead and the comic the show is based on), it features the vocal talents of TWD's Steven Yeun as "Invincible," aka Mark Grayson; the indomitable J.K. Simmons as Mark's father, the Superman-esque "Omni-man," aka Nolan Grayson; Killing Eve's Sandra Oh as Mark's human mother, Debbie Grayson, and Atlanta's Zazie Beetz as Mark's high school love interest, Amber Bennett. Aesthetically, Invincible looks just like every respectable animated feature that D.C. has ever put out, and the characters we're introduced to during what ends up be a surprisingly impactful and damn shocking first episode, including a super group called Guardians of the Globe, are straight up parallels to D.C.'s own Justice League. Why? To lure us into a false sense of security, of course. The simple set up, the reminiscent faces, the familiar-ish style of animation … it's all meant to make us comfortable, so we don't expect what we all should've seen coming from a dangerous dynamo like Kirkman: The proverbial table flip.

Not unlike Amazon's bad-ass sensation The Boys, newcomer Invincible primarily uses its first episode to kick the shit out of everyone's idea of what a superhero was before it started. The main difference between the two is that one of them is live action (The Boys), so in order to set up something visually recognizable to the audience it was color graded to have that Zack Snyder Watchmen movie look. Problem is, The Boys and Watchmen already function as gritty commentaries on the whole superhero thing, so the turn is sort of felt as it's coming. Invincible, on the other hand, uses being animated as a way to eliminate any visual difference between it and a still from an actual animated Justice Leagueor D.C. Universe movie. That's the almost scary realization one comes to watching this. The punches aren't telegraphed -- and they pack a wallop.

So, what's this big "table flip" that I mentioned up top? Well, it has to do with those Justice League stand-ins, the Guardians of the Globe, and if you know anything about Kirkman and The Walking Dead (particularly episode one of season seven), you can probably guess that it isn't pretty.

The Guardians, who took in and showed the ropes to Omni-man when he first touched down on our planet almost 18 years prior, are comprised of seven members: War Woman, Red Rush, Aquarius, Darkwing, Green Ghost, Martian Man and their leader Immortal. (They are parodies of a sort of Wonder Woman, The Flash, Aquaman, Batman, Green Lantern, Martian Manhunter and Superman, respectively.) In the beginning of episode one we're introduced to everyone at once as they thwart yet another attack on America's White House. We see them use their respective talents to exhibit behaviors and character traits befitting beings of such power and responsibility. Omni-man helps throughout but seems a bit standoffish.

As the episode progressed, I learned more and more, and my mind spun at all the possibilities, all the backstory I'd eventually get to see. I mean, their version of Batman is Black, y'all. Their Green Lantern is Black, too … and a woman … and a fashion photographer with natural hair. Their version of The Flash is French and hilarious, and Martian Man hangs out with homeless kids in trap houses. Even Aquarius looks like he packed a solid punch in battle, and he's a literal humanoid with a fish head. Admiral Ackbar stuff. Like, please. Tell. Me. More.

The thing is, they don't "tell me more" because, to put it mildly, crazy shit happens. During the last five minutes of the first episode the Guardians all get an emergency signal and individually head to their version of Justice League Headquarters in response. Upon arrival, they realize none of them were the one that triggered the signal. Suddenly, Omni-man shows up, and without saying a single word begins the most upsetting animated sequence I've seen since 1988's Akira.

Weeks later I'm still reeling, as all good comic book fans likely will do. And I'm hooked. As brutal as it is, this episode might be the most amazing execution of this type of thing that I've ever seen. I don't know what the idea was when TWD started doing something very similar(you know, the gratuitous and unnecessary deaths of characters that had been on the show for half a decade), but in The Boys, the sweet, everyday intro of the lead character's girlfriend being followed by her abrupt and graphic demise made the whole exchange an emotionally jarring one, to say the least. It was definitely an "oh shit" moment that set the show's lead andthe audience on a path of much needed resolution. Trauma had been created and then we had to resolve it by working through it. And how do we work through it? By staying with TWD.

Same goes for Invincible. As a viewer, I wanted answers, and I opened myself up to the possibility of similar experiences in order to get them. Why? Because I was personally involved. Because I felt like I was the only one who witnessed a true moment of galvanizing horror slaughter and now I was watching everyone else, specifically Sandra Oh's character, hoping they'd get eventually get hip to the enemy they'd all been sleeping with. I regret nothing.