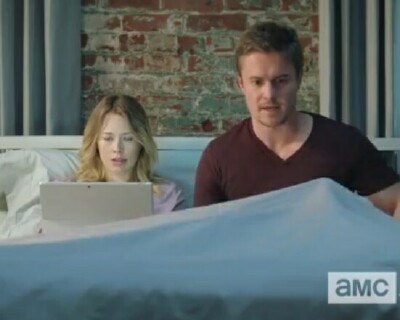 There will be no spoilers here about last night’s fall season finale of AMC’s “The Walking Dead” – though I suspect one would have to be residing in a cave not to have heard something about it by now. It’s somewhat difficult to avoid information about startling developments on television’s most-watched series – especially one that has so thoroughly permeated popular culture for several years, redefining expectations about the power and influence of basic cable programming as it marches along.

Having said that, I will admit that I wasn’t exactly blown away by the events that transpired during the episode – especially the big awful thing at the end, which didn’t upset me as much as it did millions of viewers, perhaps because I felt a certain character’s actions were forced and unnecessary and that trouble was foolishly asked for (and received). Also, this may be a case of a season finale not living up to the episodes that preceded it, which have recently been gripping and entertaining and all the other things that episodes of “The Walking Dead” (or any television drama) ought to be.

Here’s the interesting thing about all this: I may not have been very impressed by the fall finale episode of “The Walking Dead,” but once again I was struck by the overall effectiveness of the ads that ran throughout it – and those in the telecast of “Talking Dead” that followed. (I have more to say about the latter below.)

As always during half-season finales (and premieres) of “Walking Dead” I waited to see what perennial sponsor Microsoft would offer in its ongoing series of zombie-themed spots, most recently tied to its Surface tablets. Microsoft last night did not disappoint.

In the second commercial pod – and coming immediately after a gripping close-up of zombie hands reaching through the space between blocked church doors, with lots of growling and hissing (or whatever that walker noise is) on the soundtrack – a frightened young couple was seen in a car, seemingly trapped as people fleeing a zombie horde (or something similar) rushed by in a panic.

The couple had to get somewhere. Their fear was palpable, but their bravery won out.

“We can do this!” said the woman. “The kids are depending on us!”

“We go on three!” the man replied, sounding a bit like Rick Grimes. “One, two three!”

On “three” the man sat bolt upright in bed. The terror around the car was just a nightmare. His wife was relaxing next to him, busily doing something on her tablet – a Surface, of course.

“I had that nightmare again,” the man replied. “Holiday shopping scares me!”

“Relax,” the woman said. “I just finished off all this year’s shopping. No crowds, no stress.”

The woman had the Walking Dead Official Store open on the left side of her screen and her shopping list on the right. She was checking off names with a stylus. Everyone on the list was receiving a “Walking Dead” product (hoodies, survival kits, etc.). 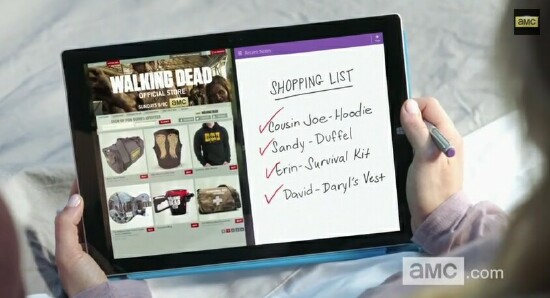 And there it was: An effective all-in-one promotion for AMC, “The Walking Dead,” “Walking Dead” merchandise, Microsoft and its Surface tablets, all bundled together in a special (and very timely) holiday themed spot – cleverly designed and, whether or not by happy accident, cleverly positioned at a moment in the show when all eyes were transfixed on the screen. For a brief instant I thought the couple in the car were part of the episode’s narrative.

After all that came a Christmas-themed ad for the Surface Pro 3.

But AMC’s very creative approach to working with advertisers in “Walking Dead” doesn’t start and stop with Microsoft, as was very evident last night. A thrilling sneak peak at the upcoming “Breaking Bad” prequel series “Better Call Saul” – featuring Jonathan Banks as Mike Ehrmantraut!! – was presented by the 2015 Acura TLX, seen racing through the desert in what looked like footage from “Better Call Saul” (or “Breaking Bad”) in clips before and after the spot. That was followed by a slick stand-alone commercial for the Acura TLX.

Even the ad that came later for the upcoming second season of Starz’ pirate adventure “Black Sails” looked custom-designed for inclusion in “The Walking Dead,” with lots of blood and guts and body parts that had to catch the attention of the audience.

All three of these spots, in fact, probably stopped a substantial number of viewers watching via DVR from scanning through the episode, as they all looked (at least in part) like content from the show.

I was also impressed by several spots I saw during “Talking Dead,” the live talk show that follows every original episode of “Walking Dead” on AMC. (I continue to think that “Talking Dead” is one of the most inspired programs on all of television, even if it is one of the cheapest to produce. It was sheer genius on the part of programmers at AMC to come up with a show that would hold a large portion of the outsize audience for “Walking Dead” every week.)

As usual, the “In Memorium” segment on “Talking Dead” – arguably the best part of the show -- was sponsored by and immediately followed by a commercial for CarMax (with an eye-catching image of three zombies and lots of audible growling in between, ensuring the continued attention of viewers). Then there was the regular Subway Fresh Buzz segment, featuring tweets from “Walking Dead” fans and leading directly into a stand-alone Subway commercial. (Subway ought to step up and customize its “Talking Dead” spots.) There was also a repeat of a long-running “Walking Dead”-themed spot for Hyundai featuring a man not unlike Rick Grimes corralling his suburban neighbors, all of them survivors of a zombie apocalypse, instructing them on how to fight walkers.

Even an extended preview/promo combo for the upcoming movie “The Interview” was customized for “Talking Dead” and for the holiday season. The spot was preceded by James Franco and Seth Rogen, the stars of the movie, addressing viewers.

These are just a few examples of why “Walking Dead” and “Talking Dead” are the only two series on television that prompt me to pay as much attention to the ads inside them as I do the shows themselves. If this skilled involvement with advertisers is happening in other shows, and with equal impact, I haven’t noticed – and I would like to hear about it.