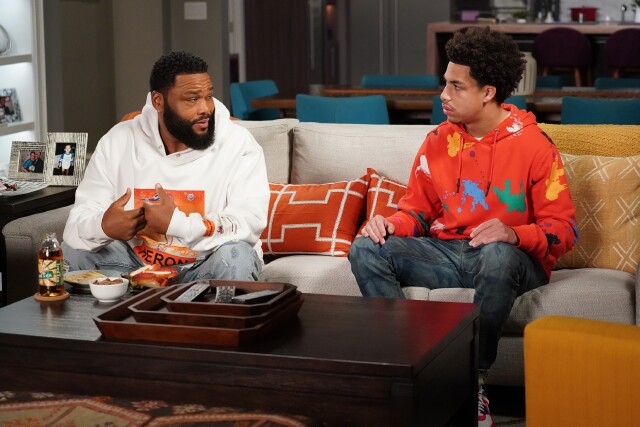 Four years ago I wrote a piece called American Color Story in which I spoke about the quantity and quality of the representation being afforded people of color -- specifically Black people -- on American television. At the time, I was bigging up shows that seemed to depict Black people in almost any kind of financially successful light, really. Yes, Empire was about a family in the music industry, but let's face it, most of the characters on that show were terrible people ... and we're always in the music industry, aren't we? And there was black-ish (pictured above), of course, but black-ish basically gave us all Juneteenth as a federal holiday, and series creator Kenya Barris can't do everything for us, so who (or more to the point, who else) is leading this charge now? Who else is pushing for an accurate present-day representation of the modern-day Black man/woman/family on television?

First, let's consider the state of things when I wrote that column. HBO's Insecure was one season in. COVID wasn't a thing yet. Season two of Atlantawas a whole ‘nother year away,and Former President Trump had been officially sworn in for less than a month. George Floyd was still alive. So was Brianna Taylor. Things were just generally less terrible than they would be in the near future, and because of that Americans didn't feel as hopeless as they soon would.

That overall feeling of cautious hopefulness was why I allowed what I allowed to pass for progress on television back then. I can barely remember a pre-Dear White People streaming TV landscape, but that's exactly what the world was when I wrote the aforementioned piece touting Fox's Empire and Star as bastions of Blackness amongst the work black-ish was doing year after year. Don't get me wrong, there was nothing wrong with Empire and Star, but were those shows really doing the work -- you know, as far as the culture goes -- or were they just getting us work?

Fast-forward a few months from when that article was published in February 2017 to around Christmastime that year, and it seemed the world had its eyes opened to a new era of Black representation -- realism. Suddenly, conversations were being had about what the definition and responsibilities of an "ally" are, and what exactly white privilege looks like, not only on America's university campuses but also in our neighborhoods and places of work.

The issue with Empire and Star wasn't what aspect of Black culture they represented; it was the weight placed on them to represent so much. Add Issa Rae's portrayal on Insecure of the broke post-college Black woman (who isn't a stripper, or a single mom, or a drug addict) to the depiction on Netflix's Dear White People of freshman intellectuals of color who have as much swagger as they do eclectic friends (and they don't own guns or sell drugs either), and what we had was more bases covered. Yes, it's all fiction, obviously, but people can sense authenticity, and while Star and Empire both had realistic aspects to them, they were overly dramatic representations of the modern Black person (see: Power).

Then, eventually, everything would stop making sense for a while. The real world would undergo a horrific transformation into a land of emboldened racists, and homophobic and anti-female rhetoric, and kind of a "f**k you" type response from law enforcement officials when it came to BLM-related matters. Honestly, the American flag doesn't even feel patriotic to me anymore. Seeing an American flag flying on someone's lawn lately feels the same as seeing a Confederate flag, not unlike the way MAGA hats seemed to replace white hoods. The message sent to us all was pretty clear, which is probably why TV changed for the better -- it became more efficient; more responsible, even.

Consider where TV had landed by 2020. America was actively being made anything but great, and the TV world responded in kind, and in spades, through responsible and educated (albeit liberal leaning) narratives. This wasn't your standard stuff about racism and privilege. This was racism, and women's rights, and LGBTQIA allyship, and Black Lives mattering, and police reform, and protest procedures, and COVID guidelines. From NBC's Superstore to HBO's Watchmen to Netflix's When They See Us, to name just three, suddenly TV was about how the government had been mistreating Black Americans for decades. Everything from microaggressions like locking up Black hair care products in stores to much larger offenses like the Tulsa race massacre had become the topics of TV's most popular shows, making the streaming world lowkey educational in the best of ways.

So, this shift helped create a space for shows like Lovecraft Country, which used that HBO money to both educate and entertain at a time when that's never been more important. But is the industry being sincere? Of course not (lol). Color me cynical, but this movement, however progressive the outcome may be, is the direct result of paper-chasing, just like everything else. Anti-racism, tolerance, representation -- all of these things didn't just become important concepts. It was just that, generally speaking, nobody really gave a shit, because there wasn't a profit to be made in educating Americans about "sundown towns," white privilege and institutionalized racism. At least not until Trump used the media as a platform to spread his hatred, which not only made him America's foil, but also emboldened bigots and the ignorance they spread as issues that needed solving. Enter TV.

Yes, the world became a much darker place after a certain point, and yet the industry didn't flinch. But now, America's color story is a little different. Whether intentional or not, it's become a little more honest, and a little more detailed. There's more support, meaning America no longer has to get all its Black history and culture lessons from black-ish alone. NBC's The Carmichael Show and programs like it blazed a collective trail of awareness and tutelage that set the stage for the right people to react in the right ways, and through the right avenues, in our darkest moments, and now, what qualifies as representation has evolved.

It's not just about Black faces on our screens… that was just how this started. Today, it's about our stories being more authentic, timely and informationally accurate. It's about being provided a clearer image of Blackness through a myriad of sources that tell our collective story in a truthful way.

America's color story is far from over, and honestly, it probably never will be, but at least it's getting better.