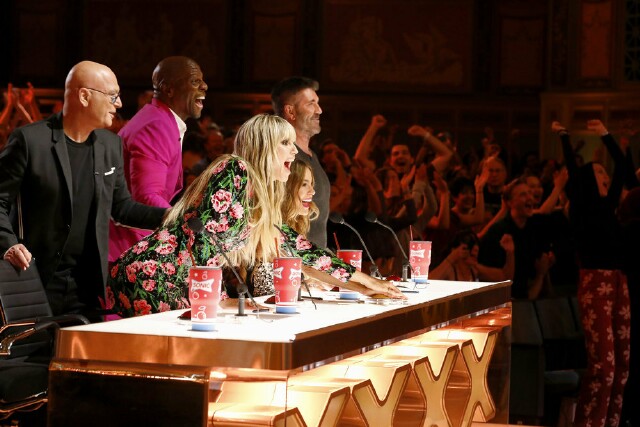 America's got talent … and all the feels, too. That's the vibe I get every time I watch NBC's AGT, which unlike virtually every other competition talent show in the history of American television only improves with age. Granted, it has changed hosts and judges repeatedly throughout its run, but that has only helped (again, unlike every other show of its kind). Now in its 17th season, AGT is as fresh and formidable -- and richly entertaining -- as ever.

I write at least one column every summer praising this program … which might seem redundant, but my appreciation for it increases with every passing year, so why not? It continues to earn my annual praise and support … although it seems to me the television press doesn't share in my perpetual enthusiasm.

Tellingly, and wisely, despite many changes in the executive ranks at NBC throughout this show's run nobody has been foolish enough to move AGT into the regular television season, an outdated structure that spans September through May. Rather, it remains a summer staple that starts after Memorial Day, ends shortly after Labor Day, and (in tandem with American Ninja Warrior) keeps NBC alive and well throughout that time … while serving as an awesome promotional platform for the network's upcoming fall lineup (another dusty industry tradition, but there it remains, so there is no point in ignoring it).

As ever, with AGT there is much beyond the awesome talent to appreciate. I'll start, as I always do, by calling attention to the sponsored cups positioned by each of the judges. More than any other commercial or product placement on TV they keep a brand's logo front and center throughout each telecast in an atmosphere any advertiser should covet. In years past, Snapple and Dunkin' held that prime real estate. In more recent seasons (including this one) they have promoted Sonic.

There are special Sonic commercials designed to maximize the AGT connection, along with cheerful branded backstage segments (as there were for Dunkin'), but for me those cups continue to level up their sponsors in ways that make an impact without causing a distraction. (Maybe it has something to do with the lighting … and maybe it doesn't … but I swear those cups sometimes appear to be glowing.) There was even a contest in 2019 that invited viewers to design a Dunkin' cup.

If entertainment (and advertising) is all about that all-important emotional connectivity, consider many of the extraordinary connections many of the contestants establish with their audience, at home or in any of the venues where the auditions and finals take place. With rare exception their talents are humbling; their collective authenticity often more so.

It's not surprising that there is always much cheering and applauding throughout, and many standing ovations, even from Simon Cowell, who as the star judge here is more empathetic and encouraging than during his time on American Idol (though I loved him on that, and continue to assert that that once formidable talent show has not been the same without him, on Fox or ABC). There is also a lot of laughter (much needed these days), the occasional resounding chorus of rejection (always well deserved, and sometimes comically) and, especially this season, occasional tears, most often of joy.

Seriously, the heartfelt stories told by some of the contestants, and their desire to dedicate their performances to loved ones they have lost, often leaves judges Cowell, Heidi Klum, Howie Mandel and/or Sofia Vergara teary-eyed, along with host Terry Crews, countless members of the studio audience and viewers at home. (I speak from experience.)

Taken together, the AGT feels can instantly make you feel alive, or happy to be alive, or both. Is there another show on any network or streamer that can so readily and consistently manage to do that? I think not.

I could fill this column just by singling out the many contestants in recent seasons who have gotten through to me in one way or another, including, at the least, many a Google search either touched my heart or my wallet. (Some of the singers have previously released their music via independent labels.) But in the interest of brevity I'll settle on these four.

First there was 11-year-old Maddie Taylor Baez, who belted out "Amazing Grace" from her seat in the audience during a commercial break, wowed the crowd, impressed the judges (especially Simon) and took to (and owned) the stage. There was plenty of emotion, too, as Maddie tearfully explained that if she won AGT she would help her dad, who has been fighting stage four colon cancer for many years. Howie gave her the coveted Golden Buzzer, assuring her a place in the finals.

Then there was Avery Dixon, a 21-year-old man with scary great talent on the saxophone who had been relentlessly bullied throughout his childhood. Host Crews wasn't having it, declaring, "I want to tell you, man, you've been bullied all your life, but you tell every bully that you have a big brother named Terry Crews, who is here and has got your back! And all those bullies are gonna have to watch you succeed, my friend!" And then he gave young Avery the coveted Golden Buzzer, assuring him a place in the live finals.

Then came Wyn Starks, who sang a remarkable original song dedicated to his twin brother, who had recently passed. Watch it and just try to hold back the tears. Heidi couldn't contain her enthusiasm, "How can we make this a hit? It's so good!"

And finally, check out Chapel Hart, an amazing country trio. I don't think these three women need to win AGT to become stars -- based on their Twitter feed they are already well on their way. But the judges were so caught up in the sheer joy of their performance (an original song inspired by Dolly Parton's 1973 smash "Jolene") that they gave them a five-way Golden Buzzer (pictured at top). Watch and just try to not enjoy!

These are just a few of the singers so far this year. The aerialists, magicians, dancers, comedians and others have been similarly sensational … and the season is only half over.

America's Got Talent is telecast Tuesdays at 8 p.m. on NBC.