"And Just Like That" Is More Reflux than Reboot 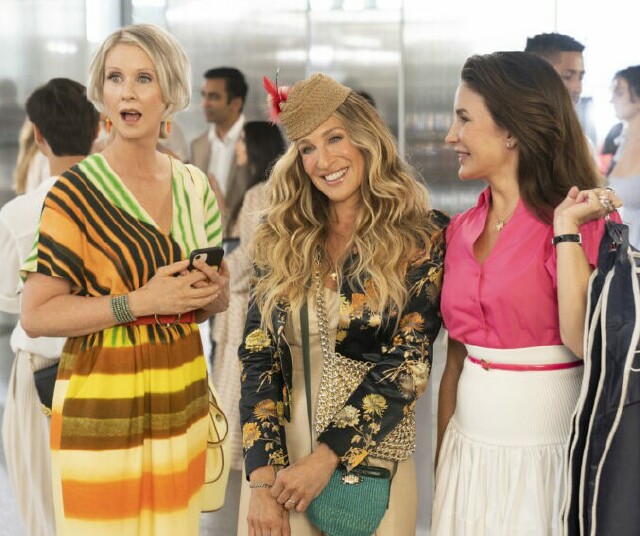 I have seen only the first two episodes of And Just Like That, the much-anticipated HBO Max reboot of Sex and the City, but like the second of the two SATC feature films that followed the original television series, I already wish it had never happened. And I don't see how the remaining eight episodes this season could possibly change my mind. Indeed, I haven't seen so unwelcome a shift from bright comedy to humorless dramedy since the dismal 1990 Brady Bunch reboot The Bradys or, even worse, the 1999 follow up to The Mary Tyler Moore Show, titled Mary & Rhoda, which was the pilot for a series that was mercifully not picked up.

And Just Like That, The Bradys and Mary & Rhoda are all built on the same basic idea … that life goes sour when you get older (and especially after 50, or in the case of the Brady kids, after their teens). This is one of the more tiresome tropes in youth-obsessed Hollywood; one most of us know to not be true. Yes, there are challenges that come with the aging process, but if you have your health, your family, your friends and a reasonable degree of financial security -- as do the characters in all three of those shows -- it generally gets better.

Maybe we will get to see that as And Just Like That continues. I keep reminding myself that the first season of SATC wasn't very popular on arrival, but the show made a few crucial adjustments and it became an influential sensation. So maybe there is hope for AJLT, but it seems to me like too much damage has already been done to the franchise (not to mention a certain at-home exercise brand) for it to fully recover. We'll see.

Sex and the City ended its six-season HBO run on a perfect note back in 2004. (After so many stops and starts, Carrie and Big were truly together at last.) The first movie, which followed in 2008, proved to be a surprising (and big box-office) treat, somehow reawakening the franchise, tossing its characters into fresh conflicts and then steering them all toward another happy ending. (Carrie and Big were married at last.) It was touching and funny.

That should have been it.

Then came the toxic Sex and the City 2 in 2010, with critics complaining about its racist overtones, white privilege undertones, ridiculous plot turns (Carrie randomly running into former flame Aidan Shaw in Abu Dhabi and sharing a kiss; Stanford and Anthony getting married and Liza Minelli officiating the ceremony, etc.) and, worst of all, an utter lack of love and laughs.

It was dreadful and embarrassing. The franchise had come to a miserable close, we thought.

And just like that … it was reanimated again, this time showing its age in all the worst ways. (Here come the spoilers.)

The first (and biggest) problem is that Kim Cattrall chose to not participate in AJLT, and the producers chose to not recast the role of Samantha. Fine and fine. Then they chose to keep Samantha alive within the AJLT universe. Also fine, and very smart. But their solution, while better than killing or ignoring the character, is problematic: Samantha, we learn in episode one, had a tiff with Carrie and cut off communication with her, as well as Miranda and Charlotte, and moved to London (where, as one of the characters notes, women over 60 are still considered sexy).

Believable? Not so much. Samantha is 60, not 16. She might, as people do, make a big move for any number of reasons, and she might not see her best friends very often (as happens). But as these details were revealed I couldn't help but wonder … when it comes to making changes in life, must there always be an excuse?

Next up: Miranda, the one with more education than the others, who was smart and crafty enough to work her way up in the cutthroat world of corporate law at a time when women still weren't always welcome to do so. No matter that she has spent her entire adult life in New York City … as AJLT opens, she is a babbling nitwit who becomes completely flustered when trying to communicate with people of color … or even with college-age kids, despite the fact that she has one at home. (A side note about her teenage son Brady: Miranda is fine with letting him have headboard-banging sex with his girlfriend in the bedroom next to the one she shares with husband Steve, but she loses her sh*t when she catches him taking a puff of weed. Bizarro, right?)

After the Miranda scenes I thought my biggest complaint with the show would be its valiant efforts to appease the demands of the woke mob, rather than reason with it. That would be off-putting enough. But then came the Incident. While Carrie and Co. are attending a piano recital featuring Charlotte's daughter (an extended sequence that brings almost all the characters together and fails to produce a single laugh) Big (the one character who seemed to have improved with age) has a heart attack after a particularly vigorous home-exercise session back at the Prestons' luxe apartment. He lingers on the bathroom floor just long enough to look Carrie in the eye when she returns home later that night. As Big died in her arms I couldn't help but wonder ... why didn't Carrie call 911?

Carrie, Samantha, Charlotte and Miranda were very much women of their time (just as Lucy and Ethel and Mary and Rhoda were in I Love Lucy and The Mary Tyler Moore Show, respectively). Sex and the City knew how to celebrate that while also addressing the inevitable dramas in life (Samantha's cancer battle being the best example). And Just Like That does not (at least not yet). In a perfect world they would have remained where they were, undamaged by the passing of time (and bad writing).

I have long believed that an updated Sex and the City series with a new group of female friends at its center would be well-received. (Remember how Jennifer Hudson's character lit up the first SATC movie?) After all, pretty much everything has changed since Carrie and friends were young women in a pre-digital New York City. For now, though, we will have to content ourselves with OG Carrie, Miranda and Charlotte as they wake up from the apparent fog they have been in for the last ten years.

That's my take as a critic. As a fan, as I hope they learn how to navigate the relentless challenges of the 2020s and have some fun again as And Just Like That continues. We have all lost too much already.

New episodes of And Just Like That premiere Thursdays on HBO Max.