Appreciating the Wonders of "The Wonder Years" 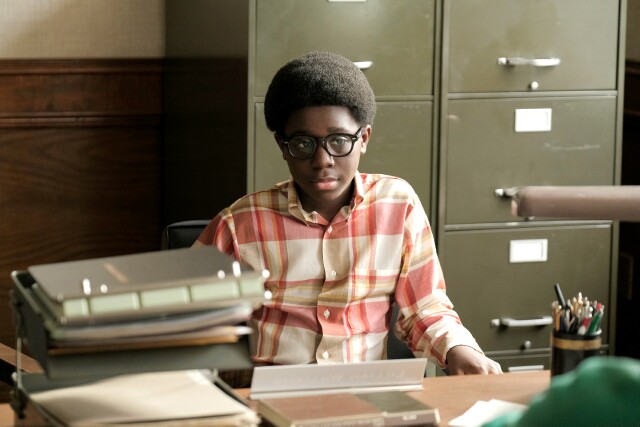 Anybody who reads my stuff can probably tell that I like to chronicle the Black experience in America using television, mainly because even in fiction, actual history has a habit of not only popping up, but also being relevant. One day, I’ll have a playlist filled with enough historical fiction and nonfiction TV to take us all the way from pre-slavery times to present-day without missing a beat. In the meantime, all I can do is think of what I would add to said list, and what I can tell you now is that this new version of The Wonder Years is definitely going to make it.

ABC’sThe Wonder Years, created by Saladin K. Patterson -- who’s been some form of producer on everything from The Bernie Mac Show to The Big Bang Theory to The Last O.G. to Dave -- stars Elisha Williams (pictured at top) as Dean, a young Black boy growing up in Montgomery, Alabama in the 1960s. The show is narrated by the voice of his present-day self, played by none other than the Mr. Don Cheadle, and is directed by Fred Savage, who played the lead (with the name Kevin) in the original version.

Now, of course there are plenty of similarities between this version and the original (stuff like the voiceover, the main character’s wild imagination, and even the time period), but my focus here is going to be on what’s different. I mean, let’s face it, these kids -- by whom I’m referring to Dean from the current version and Kevin (Savage) from the original – could theoretically have been next-door neighbors and I’d still put big money on their individual experiences being fundamentally different. Kevin is white and Dean is Black, and unfortunately for them (and us) America is a place what that kind of shit matters way more than it should.

The first obvious difference to me is the age of the narrator. Dean and Kevin are both twelve in 1968, which would make them both 65 today. Except, “present-day” for Kevin was when the original aired in 1988, making him 32 at the time. So, narration-wise, one has to consider the difference in perspective that our respective storytellers have. Our current narrator is much more seasoned and traveled than Kevin ever was. But I digress ...

The second thing that stands out to me is the treatment of current events of the time and how they are depicted, and honestly, this is where the real divide lies between these experiences. You see, in the original, the focus of the time was primarily on the Vietnam War. Obviously, the war was happening at the same time for Dean as it was for Kevin, and thus affected them both -- but in definite different ways. The final act of the original’s first episode made it clear that Brian, Kevin’s neighbor and the older brother of his love interest, was killed in action in Vietnam. However, the opening act of the current version of TWY depicts Dean’s very own older brother as being alive and stationed in Vietnam. The connection to the war is decidedly less personal for Kevin, but for Dean it’s so in their family’s face that his mother (played by Respect’s Saycon Sengbloh) won’t describe it any other way than to say that his brother is, well, “away.”

Furthermore, when Dean’s first episode ends, we don’t find out that his brother is dead. We find out that Dr. Martin Luther King is.

I’ve seen a lot of Black moments depicted on television, but I still experience life through the lens of how things work today. Back then there was no streaming. There weren’t a thousand channels to watch. There were no DVRs. (My editor tells me that many people had VCRs, but few knew how to work them beyond playing tapes.) If you weren’t home or at a friend’s when the news or an episode of your favorite show was on, then you just missed it.

So, when the news story came out about Dr. King’s death, apparently everyone was home. This show is set in a 1960s Alabama neighborhood, and this scene took place after dark, so it was quiet. Intimate, even. To hear the neighbors’ sorrowful wailing from next door, to see everyone locked on that tiny screen, to see the huge blow that the King family, and the Black community, and the world had just taken, it just … hit different.

Each version of this show has its own defining moment, and in those moments, they each showed me their potential for comedy, relativity and commentary all at once, along with a clear sense of depth. For the original, it was the fourth episode, in which Kevin’s older sister’s hippie boyfriend came over for dinner and argued with their father about the necessity of ‘Nam. For the new The Wonder Years, so far it’s the third and most recent episode, “The Club,” in which Dean is caught with some nudie magazines he finds in his house and eventually finds out that they belong to his mother during what ends up being a surprisingly progressive sex talk (for the '60s anyway).

The aforementioned episodes are defining moments because while in Kevin’s situation we hear the recognizable echoes of social justice and equality sentiments that are stillheard today from the hippie boyfriend -- who said things like Brian died for “a country that systematically represses its citizens” and “is responsible for the oppression of Blacks, women [and] free-speech” -- we also see a level of maturity and a forward-thinking mentality from Dean’s mother that shapes the idea of the man we are to assume Dean is today. This man is looking back at his life not only as a Black man in America, but as one who was raised by a woman who understood the importance of open-mindedness and mental and emotional health even when people in her own community did not. This is all while still also being affected by Vietnam, as well as everything else that came with and continues to come with being Black.

And those are my favorite parts of the newThe Wonder Years: everything that comes with being Black. I mean, as soon as the show starts we hear about “the police talk” -- a version of “The Talk” that I covered before -- which refers to the difference in treatment one could receive from police because of one’s non-whiteness. There’s also a reference in that episode to the political incorrectness of calling white people “Whitey” even though team names like the Redskins, Savages and Chiefs exist. Then of course, there are the classic aspects of the culture, like the mantras “Stay out of grown folks' business!” and “Don’t show out in front of white folk.”

The best aspect of all, though, is how cool Dean’s dad is. I love a good Black TV dad, and Psych’s Dulé Hill plays one of the best of them, Bill “Be Cool” Williams.

I’m glad this show exists, and I look forward to seeing how much of this collective experience called Blackness has and hasn’t changed over the years, through Dean’s eyes, at least. There's a lot I'm going to learn about here.

The Wonder Years is telecast Wednesdays at 8:30 p.m. on ABC.