Are Movie Theaters The Happiest Media Places On Earth? Consumers Think So! 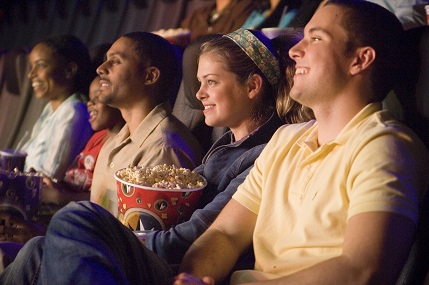 Labor Day Weekend marked the official end of the summer season at the Box Office, and what a summer it was! With an estimated total of $4.75 billion, summer 2013 became the highest grossing movie season of all time — up an estimated 10.7% over summer 2012, and 7.8% over summer 2011, the previous record holder.

There's no doubt that there are a lot of happy people in Hollywood at the moment, but more importantly, a record Box Office also means happy moviegoers. And happy moviegoers make highly receptive consumers — something that should make all of us on Madison Avenue smile as well.

Movie theaters are inherently happy places — a unique way to take a break from the stress of everyday life and fully immerse oneself in an entertainment experience. In that way, the very physical act of "going to the movies" is an activity that becomes a virtual signal to our brains to get ready for a heightened emotional journey. Simply put, we get excited about going to the movies.

Think about it… When was the last time you went to the movies feeling gloomy? Or how often do you attend the movies because you're bored or exhausted? Or when was the last time you went to the movies to help you fall asleep? Going to the movies is very much a "lean forward" decision and mind-set, in spite of those luxurious Barcalounger-like multiplex seats that let you lean back. That's because going to a movie is often the linchpin activity in an evening that is surrounded by other place-based activities like dining out, shopping or meeting up with chums for a friendly libation. It often provides us with the singular venue, if only for a few hours, for inspiring our emotional, romantic or even political puissance in a way that few other mediums can. The cinema's ability to not just reach many, but also touch them in a special way, makes the viewing of films such as Argo, Silver Linings Playbook or Slumdog Millionaire emotional catalysts that create feelings and memories which are not easily shaken or dismissed long after we leave the cinema.

In fact, a recent study of U.S. multi-media consumers, Media Behavior Institute's USA Touchpoints, was able to discern that when it came to the specific emotion of "happiness," some 62% of 2,000 respondents (Persons 18-64) used that adjective to describe their state of mind at the movies. Equally exciting to me was the fact that 29% described themselves as "excited" while 23% claimed "feeling interested" whilst at the movies. No other media came closer than 10 percentage points to the first two emotions, or closer than 7 points when it came to "feeling interested."

Moreover, that excitement manifests itself in people wanting to share that movie-going experience through word of mouth or social media, which feeds into the excitement build-up that others bring with them to the cinema. Or, in a more vernacular description, the audience is "primed, pumped and ready to go!" With such summer blockbusters as Ironman 3, Man of Steel, Monster University, Despicable Me 2, and even The Conjuring, cinema's immersive environment allows the consumer to become absorbed in whatever information/entertainment is unfolding in front of him or her — say, a commercial brand message for example.

Now one might say, hold on a minute, let's not confuse going to the movies with seeing commercials in a movie theater. Well, actually, let's… In a U.S. National Omnibus survey by Phoenix Marketing International from May of this year, nearly half (49%) of over 1,000 US Persons 18-59 said that on-screen commercials actually added to their enjoyment of going to the movies. The figure increases to slightly more than half (52%) with women, and to 54% with the highly coveted target demo of Persons 18-34.

Could the answer to our industry's ad avoidance problem lie in this rare combination of excitement and anticipation found in the movie theater auditorium? Or, could it be that, because distractions are usually at a minimum, a moviegoer's focus naturally tends to be placed on whatever is up on the big screen?

Again, USA Touchpoints tells us that 85% of moviegoers described their experience as undistracted, whereas the second closest media could only conjure up 70%. When a media environment enables you to focus precisely on what you're consuming, you are more "in the moment" and automatically more engaged with whatever you're watching. According to the study, this "happy" and "undistracted" environment was able to place 76% of movie goers in a positive emotional state of some kind. Conversely, when consumers were asked to classify what percent of the time they were "bored" while using various media, virtually no one (0.1%) described themselves as "bored" while at the cinema. In fact, many characterized their portion of media time spent at the movies as "alert."

So just picture all of those millions of happy, excited, undistracted, alert consumers in movie theaters all across America, waiting to be entertained and informed. It brings cheer to your marketing hearts too, doesn't it? So if movie theaters really are the happiest media places on earth, I guess that could explain why Disney/ABC is one of our NCM FirstLookcontent partners — for the meta-geographical synergy!