As Blockbuster Films Heat Up the Holiday Season, AM/FM Radio Gets Listeners to the Theater 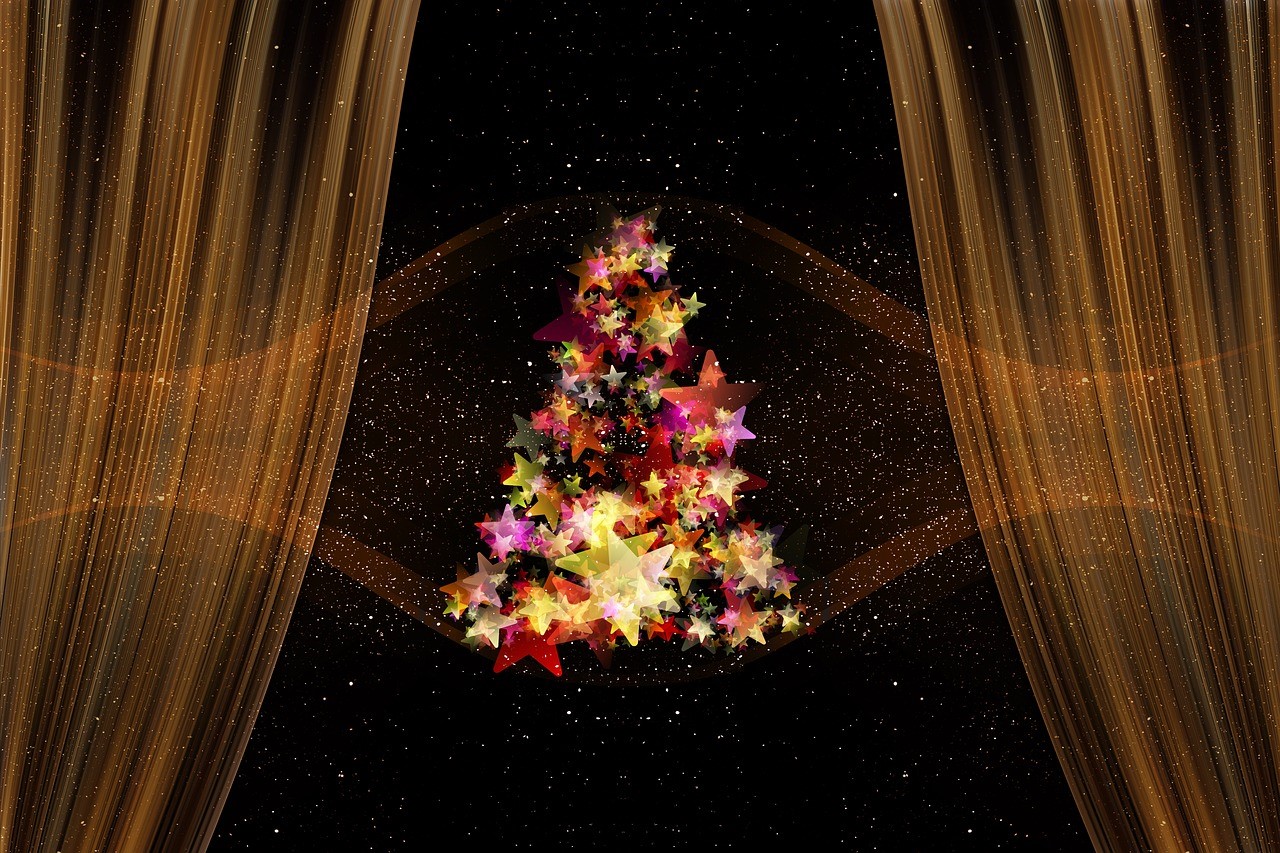 Troves of shoppers seeking the perfect gifts represent the ushering in of the holiday season, along with window displays and the tinkling bell sounds of the Salvation Army.  But another major sign that it is finally upon us is the influx of holiday movie releases.  "Coming this Christmas" is a common movie theater refrain heard all year, so by December people are ready to settle in with their popcorn.

While 2018 has been a year of major blockbusters from the film industry, there is still an impressive list of heavy hitters coming to screens before the end of the year.  In light of this, Westwood One sought to better understand the mindset of movie fans.  A national study with MARU/VisionCritical of 269 respondents was conducted last month which looked at the profile and intentions of American moviegoers, as well as how AM/FM radio impacts their holiday movie entertainment choices.

One thing was clear -- Americans still love movies.  Virtually three out of four Americans (73%) have gone to a movie theater in the last 12 months. Who are moviegoers?  Breaking it down by generation, there's a significantly younger skew of this audience.  In the last 12 months, 87% of Millennials 18-34 have gone to the movie theater, 85% of Gen Xers 35-49 and 65% of Boomers 50-64.

Using Scarborough data, Westwood One took a closer look at the mega fans or movie fanatics; those who have watched a film at a theater four-plus times in the last 30 days and usually saw a movie within the first two weeks of opening in the last 12 months.  Demographically, their profile aligns closely with heavy AM/FM radio listeners and heavy internet users.  Compared to television, these three groups are all younger, more likely to be employed, affluent and have children.

For example, the average age of the movie fanatic is 42 years old, compared to TV's heavy user who is 61 years old.  Movie fanatics earn an average of $63K a year, putting them just above heavy AM/FM radio listeners who make an average of $60K.  Seventy-eight percent are using social media, exactly the same amount as heavy AM/FM radio listeners.  They're an attractive group for movie studios looking to target a young demographic with money to spend on their families. 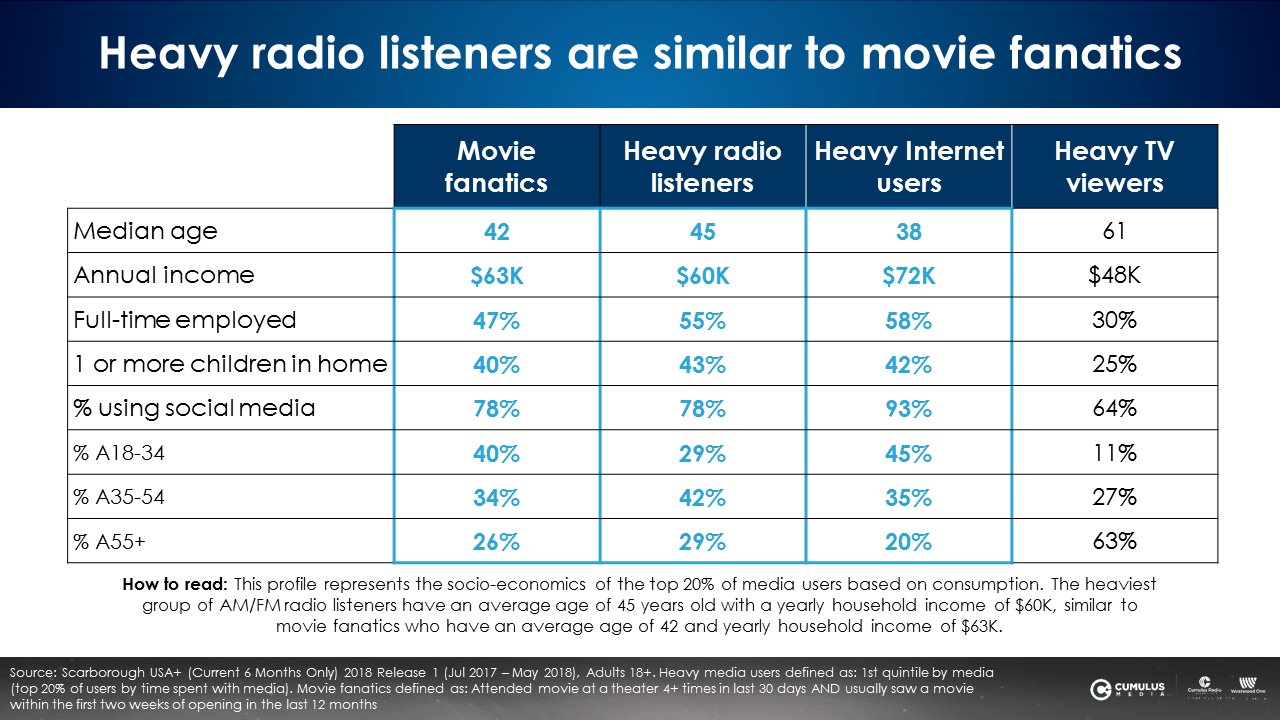 This month sees a long list of movies making their way to the masses.  The MARU/Vision Critical study reveals that overall, 77% of those who have gone to a movie in the past 12 months intend on seeing a flick in December.  So what do they want to see?  Nearly half are eyeing DC's epic Aquaman as their choice.  Disney's Mary Poppins Returns and the Will Ferrell and John C. Reilly-fronted Holmes and Watson will each see about a quarter of moviegoers. 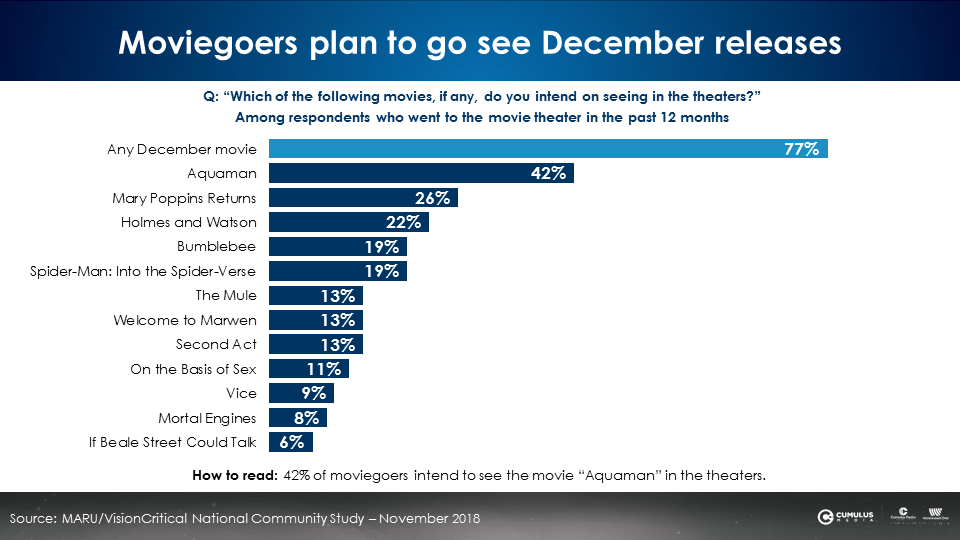 These selections make sense when taken with what was also revealed about movie genre preference.  According to the study, the most frequently watched movie genre among moviegoers is a comedy (59%) followed closely by action (49%) and drama (39%).

Moviegoers are also eager to seek out new movie releases.  Nineteen percent go to the movies once a month as new movies are cycling out of the theaters, the MARU/VisionCritical study reveals.  How do they hear about these new movies?  Whose opinions do they trust to inform these repeated visits?  AM/FM radio!

Listeners tune in for various reasons, but people turn to AM/FM radio because it resonates emotionally.  One of the major factors is on-air personalities and the relationships they have with their listeners.  Another Westwood One-commissioned MARU/VisionCritical study released earlier this year revealed the strong affinity between a radio DJ and listener.  Forty-six percent revealed that their favorite AM/FM DJ, personality, or show represented an opinion leader they trusted.  The same holds true for moviegoers.  Over 1 in 3 (36%) of moviegoers would be likely to see a movie recommended by an AM/FM radio personality.

Radio is also an effective medium overall for reaching this group due to high ad recall.  Sixty-one percent of moviegoers recall hearing a movie advertised on AM/FM radio.  That number jumps to 70% when looking at those who visit the theater once a month or more, according to the study.  Plus, radio delivers holiday crowds at their most valuable moment -- in their cars.  Edison Research's "Share of Ear" from Q3 2018 has AM/FM radio's in-car share of ad-supported devices at 86%.  RADAR data shows two-thirds of AM/FM radio listening occurs away from home.

With captive audiences similar to their core customers and who are close to the movie theaters, along with the trust between personality and listeners, studios who utilize AM/FM radio can make a big impact, especially in these high movie-going holiday months.

Mr. Bouvard is Chief Insights Officer for Cumulus Media and Westwood One.  Pierre works with brands and agencies to craft targeting and measurement solutions.   Previously, Pierre was SVP of Sales for TiVo Rese…