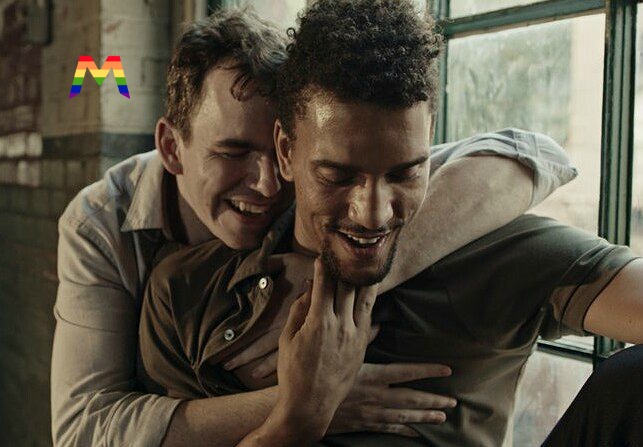 The Feels, a short-form web series on YouTube, is much more than just an artfully executed New York-based dramedy.  Created by Naje Lataillade and Tim Manley, and produced by Camden Elizabeth and Suitcase Productions, this show -- which is comprised of over 85 separate episodes varying between one and ten minutes long -- is more of a mosaic of moments.  All the little pieces come together to form the multi-faceted portrait of Charlie (Manley), a bisexual teacher who feels a lot, arguably too much, on his journey to sort through his issues with himself, his lovers and whatever his community is.

The particular season of The Feels I am writing about is its third, and while normally I’d have gone back and experienced the show from its very beginnings, its outside-the-box storytelling methods had already influenced me somehow, and instead I chose to view this current season with absolute innocence.

At first, The Feels feels a bit disjointed.  Sure, seeing the previous two seasons would have provided a sense of familiarity with its format (and possibly some of the characters), but I felt it was important in this case to watch the series the way someone new to it would, and not so much like an overly thorough professional.  It’s just not how most people experience these things.  At any rate, the first thing I noticed is the series avoids a lot of things that are normally taken for granted in a show.  There was often no real plot per se, so much as there was a premise.  It was (almost) always eventually clear where we were, or what was happening to a certain extent, but how we got there, who these people were, or what exactly needed to be accomplished during each episode (if anything) was, at first glance at least, never more than hinted at, if indicated at all.

I had to wonder, what was it about this disconnected format that seemed to benefit Manley (pictured above) and Lataillade?  Granted, smaller chunks make everything a little easier.  No real overarching plot means more freedom with each foray back into the world they are building.  It also means that every moment can be paid the exact amount of attention it deserves.  Sure, in a 22-minute episode the creative team must establish the setting, introduce the players, get through at least one main plot and a subplot or two, and reset it all before episode’s end.  In The Feels, though, one can spend an entire four minutes watching a single shot where an unnamed woman just sings, or experience 45 unadulterated seconds of Manley (as Charlie) just, like, staring around.

This sort of anti-structure structure also allows for dedicating entire “episodes” to single bits.  It allows that same level of focus to be applied to pretty much anything, really.  Suddenly, one can see the appeal (not to mention the versatility) of working this way.  Got a four-minute skit about being “The World’s Loneliest Person”?  Done.  Got a five-minute monologue about your grandma?  Done.  You want to spend some alone time with a very interesting man who’s dropping real-life knowledge bombs while explaining his emotional foray into pottery?  Well, that’s going to need ten minutes and gosh dammit it is done.

After a while I realized this whole thing is kind of genius.

Interconnectivity is probably the one thing that allows this collage of short films to even be considered as one coherent show.  Again, characters aren't really introduced officially in-show (as far as I’ve seen).  So, if Charlie and his boyfriend are having a kind of heavy discussion in one episode and then two episodes later Charlie says to a friend, “My boyfriend broke up with me, so thanks for helping me move,” that’s all we get.  There will be no break-up scene, and no breakdown of why it happened.  It just … did.  That connection, regardless of how small, solidifies the idea that the things we’re seeing are all kind of happening around each other, even when they don’t directly interact.

Perfect example: I originally took this show’s current release schedule (one episode per each day of pride month) plus its LGTBQ-friendly subject matter as an indication that every character we’d come across would be some version of not-straight.  I also felt it meant that every episode would also kind of be related in that way, as well.  Then I saw S3E07 “AVOCADOS feat. Almonte.”  Now (spoiler alert), Almonte is gay, but when we meet him in that seventh episode, the focus isn’t on his sexuality at all.  The focus is the neighborhood he lives in.  He sits there, a Latino student, conversing with an African American teacher about the pros and cons of gentrification, and the current state of the police and their motives, and it’s one of the most insightful and truthful episodes of the bunch.  What does any of this have to do with the show we’ve been given?  Well, our lead, Charlie, is a teacher, and this is the school that he works in.  He literally shows up and asks them what they want for lunch.  It’s all connected.

This month’s collection of episodes hasn’t even stopped coming out yet, and while, again, I’d normally wait until I’d seen every single one, I feel like it’s important that these are coming out during pride month.  Yes, the fact that the YouTube comments are chockfull of bisexual men praising Manley’s representation of their community is huge, but Manley’s and Lataillade’s collective insight has greater reach than that.  There are bi characters, straight characters, trans characters, and so on, and the one thing they all have in common is how they feel.

I may have focused on the outliers in this analysis, but the majority of these clips, episodes, whatever, are very intimate monologues, or short conversations, or performance pieces, and unless directly related to the topic at hand, each character’s race or sexuality or gender usually has little to do with the performances at all.  The connective tissue is feelings, or “the feels” as they’re called.

We all have them, these feelings, and they are all connected to who we are, and who we aren’t, and they all make us feel alone, and confused, and helpless, as well as empowered, and confident, and communicative.  Everyone you’ll see in The Feels is different, but I feel like the real point is that we’re all the same.  The forward-thinking format of this show more or less frees it from the confines of how people normally think about serialized television, episode length and whatever a season is, but more importantly, its subject matter seems intent on dissolving the barriers that separate each of us.

This series has something for everyone, because it truly doesn’t matter who you are or what your struggle is … we all get The Feels now and then.