At Summer TCA 2015, Netflix is Everything 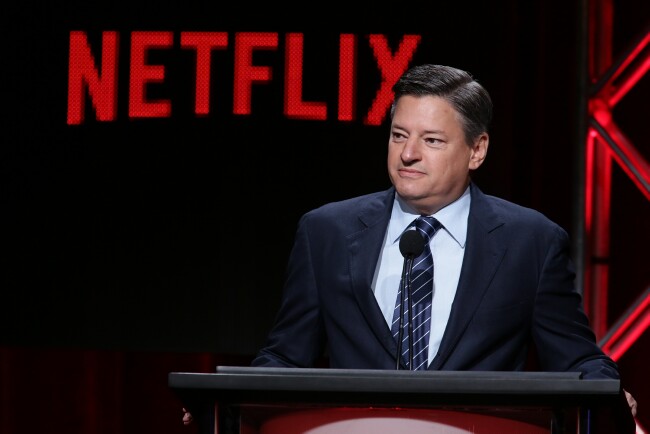 Is Netflix everything? It certainly seemed that way yesterday at the Beverly Hilton Hotel during the historic opening day of the 2015 Summer Television Critics Tour. In a quantum leap of participation, and perhaps as a reflection of its current position in the home entertainment marketplace, Netflix impressively filled an entire day with panels for current and upcoming programs, along with a session with Chief Content Officer Ted Sarandos (pictured at top). And just like that, the scrappy streamer joined the ranks of CBS, NBC, ABC, Fox and FX – the only programmers who consistently present full days of panels during TCA tours, at least those in the summer.

Most impressively, Netflix accomplished this without including panels for its signature successes "House of Cards," "Bloodline," "Grace and Frankie" and "Daredevil" or any of its upcoming Marvel series. Further, Netflix provided a lavish breakfast served in a lounge area cleverly designated the Netflix Living Room, which was open all day. Lunch was served in one of the hotel's outdoor areas, the Oasis, done up with a "Wet Hot American Summer" camp theme.

After breakfast the day began with Sarandos fielding the usual questions about audience size and ratings, which as usual he didn't answer in the way reporters want such questions to be answered.

When one critic asked if "Orange Is the New Black" is the most popular series on Netflix, Sarandos didn't offer a direct response. Instead, he said that the reason Netflix doesn't "line [its shows] up against one another is it's not the intent to draw the biggest audience from any single show.  The shows are built and designed and we invest in them based on the audience that we believe the show can attract.  And it's successful if it attracts that audience segment.  None of those shows are designed for or built to attract the entire 65 million subscriber base to watch. There's a temptation to say if a show does a couple million, it's a hit, and if it does a couple million less, it's a failure. In fact, these shows have been successful at addressing the audience segments that they were chasing.  And I think when you see something like 'Orange Is the New Black' or 'House of Cards' or 'Daredevil,' you can feel it in the culture, that these shows are getting a big, broad audience, not just in the U.S., but around the world."

Sarandos got the room buzzing with tidbits of information about many of Netflix's high profile shows. He said that the upcoming Marvel series (which include "Jessica Jones," "Luke Cage," "Iron Fist," "The Defenders," the second season of "Daredevil" and possible second seasons of the others) would likely debut at a rate of one every six months. Mary-Kate and Ashley Olsen are "teetering whether or not they will be around" the production of "Full House" follow up "Fuller House," which shot its first episode last week. Netflix is "plugging along" (with talent, etc.) on another season of "Arrested Development." Also, it is still happy to be in business with Adam Sandler despite the soft domestic opening of his latest movie, "Pixels."

"'Pixels' [had] a $24 million domestic opening [and] did $25 million international," Sarandos said. "A third of our subscribers are outside of the U.S., and we did our deal with Adam Sandler because he's an enormous international global movie star.  That $50 million for 'Pixels' is pretty respectable and I think will continue to grow."

After Sarandos the panels kept coming. First up was "Unbreakable Kimmy Schmidt" (pictured above) with the cast and creators Tina Fey and Robert Carlock, followed by sessions for the upcoming fact-based, ten-episode period crime drama "Narcos," about drug kingpins in the late 1980s; several upcoming original documentaries, and the mesmerizing sci-fi drama "Sense8."

The morning ended with Chelsea Handler (pictured below), who was here to talk about four documentaries she is producing and starring in (in which she will explore such subjects as marriage, racism, technology and drugs) and her new late-night talk show, which will run several nights a week and will not be live because of the time required to prepare them for distribution throughout the dozens of countries Netflix is in. She not unexpectedly commanded the stage from start to finish. 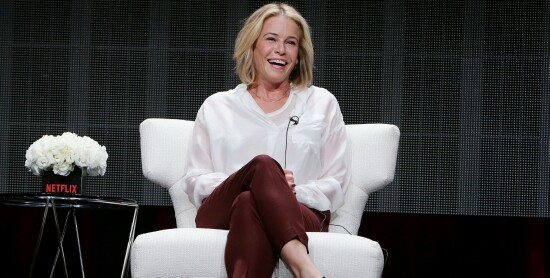 The afternoon kicked off with a panel featuring show-runners from the series "Marvel's Daredevil," "Marvel's Jessica Jones," "Grace and Frankie," "Wet Hot American Summer," "Bloodline" and "Club de Cuervos." That led into a Q&A with Todd Yellin, Vice President of Product Innovation at Netflix, who talked about all the ways Netflix assembles personal information about the entertainment preferences and viewing behaviors and personal choices of its customers and how it processes that information to enhance customers' experiences.

During his time on stage the fast talking Yellin admitted that Netflix knows how many people watch each show, adding that he would have to be put "on a stretch rack" to be made to reveal that information.

But Yellin was adamant throughout: Even though Netflix is extracting information about its customers and tracks the number of people watching its programs, it does not "spy" on its users and does not concern itself with "ratings" (terms reporters used in questioning him).

The afternoon continued with sessions for "Longmire," the western drama that is migrating from A&E to Netflix, and "Master of None," a comedy series starring Aziz Ansari.

In a maneuver frequently favored by networks or network groups that command large segments of time (or entire days) at TCA tours Netflix saved the best for last: A panel with the cast of "Orange is the New Black," a program as hot as any other on any network or service.

All in all, it was a day of non-stop Netflix action that will long be remembered as the day a powerful streaming service powerfully moved to the top tier of TCA presenters.