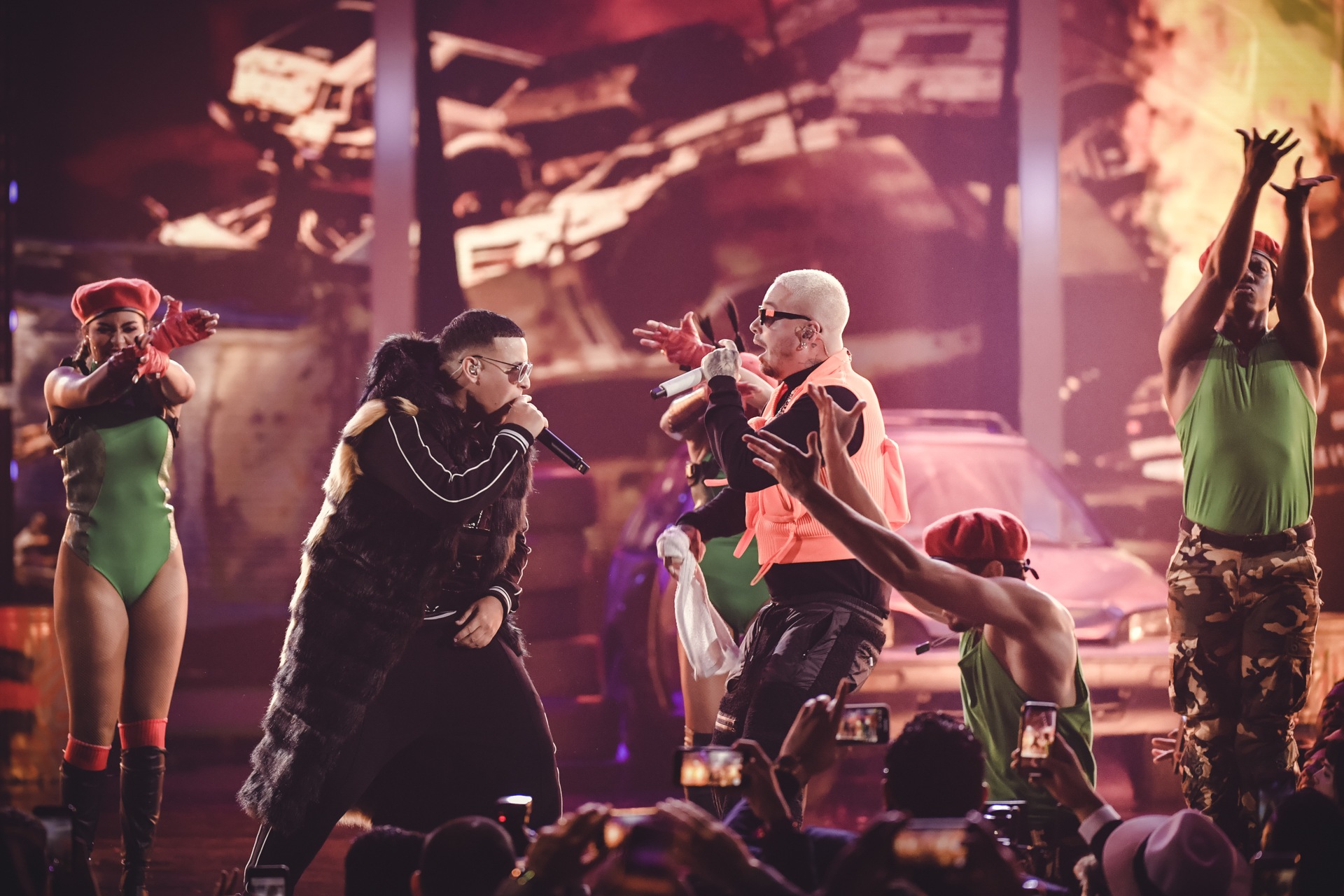 When the biggest names in Latin music gather on February 20 for Univision's 32nd annual Premio Lo Nuestroawards show, they'll be joined by a host of blue-chip brands looking to connect with the influential and fast-growing Hispanic community. From longtime title sponsor T-Mobile to entertainment studio Universal Pictures (returning after a hiatus) to State Farm Insurance, the U.S. Census Bureau, and Dolby, Univision has assembled an impressive roster of advertisers to support one of its marquee live events.

Univision pulls out all the stops for the live telecast, which will run on linear TV and Univision streaming platforms. The Spanish-language media company also offers extensive opportunities for brands and fans on digital and social media. For instance, T-Mobile will take fans behind the scenes on Latin stars CNCO's and Manuel Turizo's social platforms. Dolby will showcase its new Atmos technology as part of a two-day on-site activation in partnership with J Balvin. The J Balvin Immersive Experience will feature audio-visual and custom content experiences, including an exclusive Augmented Reality (AR) social filter with artwork from the star's upcoming album that will be visible on the accounts of Univision talent Migbelis Castellanos and Univision Creator Network influencer Mario Ruiz, as well as on the Dolby and Univision social platforms. And Universal is taking advantage of the live audience to spotlight its upcoming Trolls World Tour movie with an exclusive trailer. For its second year with the special, State Farm is debuting a custom vignette featuring superstar Sebastian Yatra and capturing live video of fans in the "State Farm Community Fan Pit" that will appear following the close of Yatra's performance.

These are just a few ways that marketers are capitalizing on the music event's enormous reach. Last year's broadcast attracted 7 million total viewers and ranked as the season's top-rated music awards show with Hispanics, regardless of language. As the buzz for the show builds, MediaVillage's Alli Romano spoke to Univision's president of ad sales and marketing, Steve Mandala, about this year's marketing innovations, how live events still deliver for brands, and whether the ad community finally understands the power of the Hispanic audience.

Alli Romano: As this event grows, your roster of sponsors and types of activations does, too. What are some highlights for this year?

Steve Mandala: We have a great lineup of sponsors because this is one of the best specials on television, in English or in Spanish. One highlight is T-Mobile. They're in their eighth year of sponsorship and every year we find new ways to energize and reinvent what they do. They sponsor our red-carpet show and we do a magenta carpet, which is their color. They have musical talent they work with on an ongoing basis who are in the show and closely aligned with Univision.

Dolby is a first-time sponsor and they're doing an experiential activation around their audio technology beginning today, which is a great way for consumers to tie in. We also have State Farm, the U.S Census Bureau, and Universal Pictures.

We've been doing this for decades. This show is an acknowledged leader and it's consistent with our strategy of big live-event content that aggregates audiences not only through linear, but also through our social handles, through our digital content, and through all of our platforms, including audio.

Mandala: Our stated purpose is to inform, empower, and entertain and this sponsorship combines all three. We certainly are entertaining our audience, but the Census empowers, and through their sponsorship, they're going to inform our audience on how to use the Census and what it means.

I'll just say it works the opposite, too. This is a perfect place for the U.S. Census Bureau to be because our mission lines up exactly with what they're trying to do. In 2020, there's nothing that's more important for our audience than the U.S. Census or the general election, which are closely tied together.

Alli Romano: Marketers have more choices than ever for their ad dollars. What is the value proposition to advertising in a major event like this?

Mandala: Music is a passion point and cultural binder for our audience, and marketers really do see the value. It crosses a lot of demographics, including countries of origin, age, and gender. Also, the strategic value of big, live events like this is that they aggregate audiences and create live engagement. Today, that equals news, sports, and music tentpoles, and this fits in perfectly. The proof is that 90-plus percent of our primetime audience is still watching live. English-language networks today are happy if they get to 55 percent live. We're at 90 day-in and day-out, let alone for things like our music tentpoles, big sports properties, and news coverage.

Alli Romano: As the show has grown, how have you expanded marketing offerings on linear and digital?

Mandala: Today's marketers are looking for things that deliver those big aggregated audiences, but they're also looking for strong marketing tie-ins. As we've expanded the footprint beyond linear to digital, both online and social, we've found new ways for sponsors to become more involved. The activations in the digital world give the event a life beyond the special itself.

Last year's show was our third-highest-ranked special for social engagement after the Latin GRAMMYs and Premios Juventud, and the third-highest for social among all broadcast and cable English and Spanish-language entertainment shows, with only the GRAMMYs and the Academy Awards generating more social activity. That level of social activation speaks to the stickiness and the engagement that the content has with our viewers, users, and listeners.

Alli Romano: Your major sponsors represent a broad cross-section of major ad categories. Does that indicate the ad industry finally on board with the power of Hispanic audiences or are you still banging down doors to educate brands and agencies?

Mandala: Those who are active see huge value and they get results from it. But we are still constantly doing evangelical work to help advertisers and marketers who are not currently active understand the value in the size of the opportunity that they have. What this diversity says is that the Spanish-language market is a vibrant place and a diverse group of categories is having success addressing our consumers.