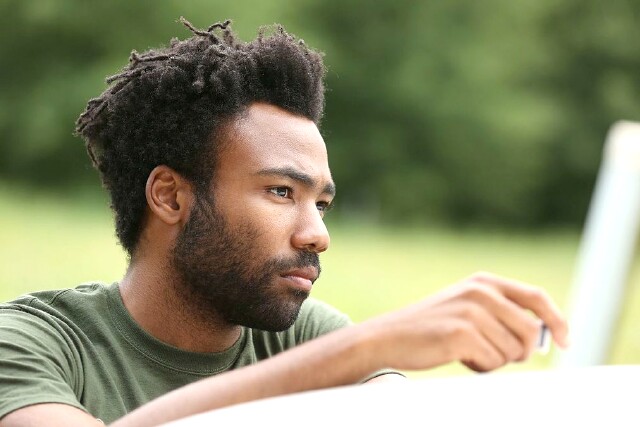 FX'sAtlanta  feels less like a TV show and more like a record -- that is to say, it feels more like a Childish Gambino album.  As someone who’s been following Donald Glover’s acting career since Season 1 of Community and his music career since the release of his EP, titled EP (released in 2011), I’ve found that if when describing the first season of Atlanta you try to put it in a box (dark comedy, sitcom, whatever) you limit yourself to descriptions that are not as accurate as you think. This makes perfect sense – because Glover (pictured at top) has never allowed himself to be boxed in, regardless of the medium.

Take a look at his musical career overall and it’s easy to see that Glover’s been on a journey of self-discovery, constantly shedding the previous conceptions of himself with every iteration of his work. Like many artists he yearns for the world to understand him and see things from his unique point of view, while at the same time maintaining the somber understanding that not everyone’s going to get it – or him.  His work doubles as a commentary on life as he sees it, and has had to live it, and in doing so has become a diary of sorts … his thoughts, fears and desires, all lying naked on the page. That's what listening to a Childish Gambino album is like, and Atlanta achieves a similar feeling. It’s not a microcosm of the “black experience” anymore than Friends was designed to show what it’s like to be white. It’s his experience, filtered through the lives and eyes of his characters. It’s a story about what could be real people, in what is definitely a real place, and how they deal with the real circumstances the universe saw fit to drop in their laps -- all with a very Gambino spin.

The tone of the show vaguely resembles Glover’s 2013 short film Clapping for the Wrong Reasons. In just under 25 minutes, the film takes you through what could’ve arguably been a day in Donald’s real life. Initially, it paints a picture of a surreal and relaxing existence surrounded by friends in an opulent West Coast home. There is music making, game playing and herb smoking, with Glover’s biggest concern being the mysterious identity of the girl who woke him up. The near-serenity of it all is abruptly interrupted when we suddenly see him in the bathroom pulling a foreign object from his bloody nostril – a string inexplicably tied to what appears to be a gold tooth. This unnerving moment is immediately followed by a conversation during which a friend tells Glover a story about buying gun at the age of 17 because of death threats he received, and is perfectly summed up by a quote from that same conversation: “You just get that point like just, ‘How did I get here?’ Sometimes you just can’t explain why things happen.” (Watch the video below.)

I believe this is the underlying philosophical structure behind all of Glover’s work, whether it be his stand up, his music or Atlanta:  The idea that life can be random, poetic and beautiful as well as weird, disturbing and dangerous seems to permeate it all.

This is further reinforced by Glover’s most recent album Because the Internet. Coupled with the website becausetheinter.net, it created a movie that you “watched” in your mind.  You would read an online screenplay embedded with very short, subtitled videos depicting key scenes and play corresponding tracks from the album when instructed. The album itself, which originally seemed like a dissonant and slightly confusing departure from Glover’s usual stuff, made total sense when coupled with the website. The cd was actually the soundtrack to his film, each song representing the tone of a certain scene, and it damn near blew my mind.

This “movie” had a story, and that story had all the same elements of Atlanta. It followed the main character, referenced only as The Boy, through a series of seemingly everyday events like waiting to get into a club, fighting with his girl, eating with his boys and falling in love. These “normal” moments were interrupted regularly by instances of weirdness, existentialism and danger. The Boy dealt with the death of his father and the idea of his own mortality (after seeing someone get shot), as well as the consequences of kicking around with unsavory characters.

All of these ideas pulse through Atlanta. Sure, the characters are different and, conceptually, a lot less is left to personal perception.  We see Earn deal with the confusing nature of his relationship with Van (the mother of his daughter), as well as his newfound independence after having been cut off financially by his folks. He deals with the realities of a flawed justice system after watching an obviously mentally unhealthy man be assaulted by a police officer. He also has a number of interactions that can only be described as odd: The sandwich guy on the bus, the case of mistaken identity by the scorned agent at the industry party, the racially insensitive get-together thrown by Van’s rich stepfather and much more. There are even elements of mortal danger starting with the first episode that return throughout, reminding us that sudden death is always a possibility.

Heavy stuff aside, the show’s pretty fun.  It chooses not to take itself too seriously, understanding that with a certain level of drama and tension there should also be laugh or two to break things up. Alfred -- a.k.a. rapper Paper Boi -- and his right hand man Darius tend to be the comic catalysts, with Earn and Van shouldering most of the weight in the drama department. The show also uses pretty creative methods to comment on culture and pop-culture topics alike.  One entire episode parodied the channel BET while also tackling how a black man from the hood perceived transgender people. Then there was the episode in which Justin Bieber was black.  Seeing the Biebs the way he probably sees himself was, in a word, marvelous.

Certain questions remained answered at the season’s end. Why no legal ramifications for anything Paper Boi does? He commits at least two felonies during the season and is an active drug dealer with an increasingly large spot in the limelight. And exactly how famous is this dude, anyway? He’s got a mixtape and no album, and hasn’t been signed, but does interviews on major networks and plays charity basketball games with Urkel and Black Bieber.

I realize that the beauty of a Donald Glover/Childish Gambino album (or short film, or whatever) isn’t that when the experience is over something particularly meaningful has happened. Yes, a certain story is told, whether it be a semi-fictional day in the life of himself as a new rapper, the story of The Boy and the perils surrounding his life, or the story of Earn using his cousin’s newfound fame to make a name for himself as a man, a manager and a friend. Things have been taught to us. Questions have been asked of us. We laughed a bit, cried a bit and lamented over the destinies of our new “friends.” Their lives are scary and weird and dangerous and funny and awesome and beautiful -- and so are ours.

The goal of Atlanta was to build that vibe; the same vibe that informed Because the Internet and Clapping for the Wrong Reasons. That goal was accomplished, with a season instead of a record, and episodes instead of tracks, and like most great albums from dope artists, I seriously can’t wait for the next one.