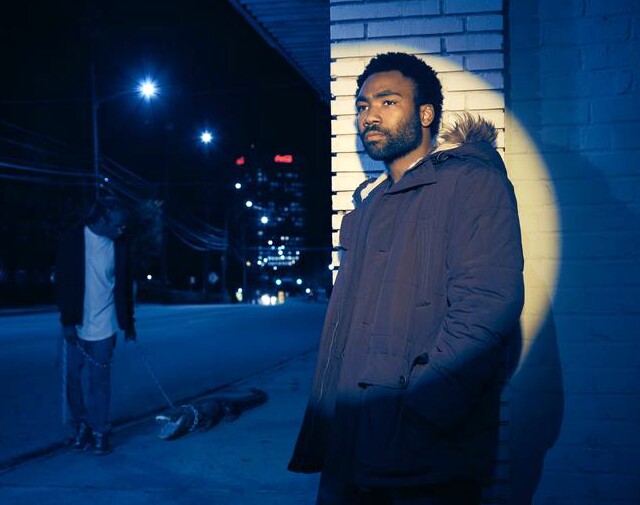 Created by, written by and starring Donald Glover (pictured above), the man who probably writes “everything” in the special skills section of his resumé, Atlantawas a major player during last year’s “Black TV Revolution” (as I’ve come to call it), and for good reason.  Fresh, visceral and weirdly poetic, Atlanta hit the dramedy nail right on the head, serving viewers a perfectly balanced cocktail of swagger, silliness and serious cinematography.  Validation of the series came just two weeks after the first season’s premiere in the form of a renewal by FX for a second.  That validation was itself later validated in the form of two Golden Globes and two Emmys -- three out of four of which were for Glover’s acting and directing prowess.

Watching Season 2, dubbed “Robbin’ Season,” feels like listening to the follow up album to your favorite artist’s hyper-successful first effort.  You’re nervous, wondering if this new stuff can live up to its own immense hype. Well, there’s nothing to worry about here, so breathe easy. “Robbin’ Season” is upon us, and the gettin’ is good.

Atlanta picks up pretty much where Season 1 left off: Alfred (Brian Tyree Henry) is still up-and-coming as rapper Paper Boi, Darius (Lakeith Stanfield) is still working as his right-hand man, Vanessa (Zazie Beetz) is still Earn’s baby momma/on-again-off-again (currently on again) girlfriend, and Earn (Glover) is still, well, being Earn, but we’ll get to all that.

The first episode of Season 2 opens with an amazing sequence.  Two dudes we’ve never “met” before are having a regular conversation about work and what not, when it’s divulged that a local fast food joint sells quarter ounces of cannabis through the drive-thru window.  The fellas head over, supposedly for some bud and grub before going to their (assumedly) hourly gigs later in the day.

Everything seems to be going to plan until they reach the window and it becomes obvious there was a different plan all along. The two men are both masked now, and one pulls a handgun out and aims it at the window employee, firing a warning shot or two in their direction before leaping through said window in search of the ganja.  On their way out with the product, the thief is chased by a now AK-47-wielding drive-thru employee who seems intent on stopping them.  After shooting back and forth, the thief makes it to the car, which begins to take off.  The employee fires a few rounds into the back windshield.  The car stops for a second, the back door opens, and a bloodied, disoriented young woman we hadn’t seen yet emerges.  After a second or two of confusion, she begins screaming in both shock and pain.  The car pulls off, leaving her in the parking lot with the also stunned fast-food employee.  Cut to: Aerial shots of the city of Atlanta set to trap music.

This scene is the epitome of what makes Atlanta dope.  In one sequence, every note that defined the series in Season 1 -- notes I mentioned in my review of that season/my first review ever -- is hit.  The supposed normality of everyday life is presented to us through casual conversation, then subverted through abrupt, jarring action that paints a picture of what is, in reality, still everyday life to some people.

This is then combined with the idea that amongst all this “weirdness” is a bunch of folks just trying to do the same sh*t everyone else does: Survive -- however they can.  Add episode director Hiro Murai’s affinity for slicing together dramatic visuals and the iconic soundtrack that flows through the hoods of modern day ATL and what you’ve got is artistic expression at its best.

In Atlanta (the show, at least) “Robbin’ Season” is the period of time before the holidays when the less fortunate make themselves more fortunate by, you guessed it, robbing people.  This singular change to the show’s backdrop quietly adds a hint of ever-present danger to every scene, taking the overall underlying suspense up a notch, no matter what’s going on.  It’s reminiscent of the opening scene in Season 1 where it’s implied that Alfred shoots a guy during an altercation, indicating to people right off the bat that life-threatening danger is always just around the corner for our protagonists, and pretty much anyone else.

In other words, anybody could get it out here.

This is a black show by definition, sure, but it isn’t a show about the black experience, per se.  It’s about Earn’s experience, and how random and occasionally pointless it seems.  I mean, stuff happens, but is anything really happening?  That question sums up life, not just for Earn, but all of us, and the creatives behind Atlanta’s success know that.  It’s probably why the show’s official Twitter has been promoting its second season through the use of borderline profound non-sequiturs posted in the show’s voice.  Tweets like “`because they calves was so firm’ is part of no success story” and “the bottom of the sea covered in emeralds and rubies, under a one-mile layer of 90s demos and a thin blanket of unanswered friend requests” do an excellent job of complimenting the often arbitrary and humorously cynical tone of this critically acclaimed series.

So, if anyone asks you “What’s the flat out, best damn show on television right now?” and you answer “Atlanta” it means you’ve been paying attention.  If you don’t, it means you should probably have cable installed beneath that rock you’ve been living under.