AT&T Gets Its Message Across in a “Flash” 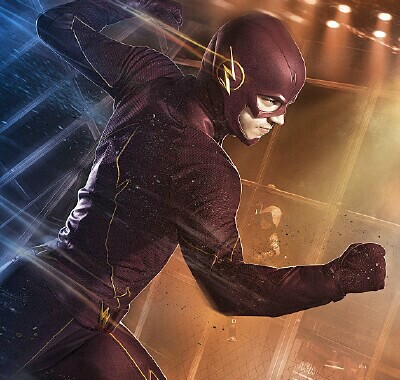 You’ve got to admire the way The CW does things.

Take its latest promotion: The AT&T sponsored “In a Flash” contest that appears at CWTV.com and receives heavy on-screen promotion during telecasts of its highest rated series, “The Flash.”

Commercials for the contest appear in commercial pods. But they also appear during the show itself in the increasingly cluttered environment known as the primary primetime telecast. I remember back in the Nineties when the first network logos (then known as bugs) began appearing on screen during primetime. (If memory serves Fox started it all.) Most of the television audience at the time – millions of people who had come of age blissfully enjoying distraction-free TV – grumbled in protest. But in the two decades that have followed, as TV screens have filled up with all manner of extra content (from bugs to hashtags) regardless of the programming being telecast and computer screens have conditioned us all to the minute-by-minute bombardment of multiple images (whether they be of interest to the user or not), the complainers have been replaced by the complacent.

But I digress. To put it bluntly, on screen “stuff” is now ubiquitous and nobody seems to care. So why not find new and different ways of exploiting it – something beyond network identifiers (which have become quite useful to those who enjoy channel surfing) or ever changing hashtags?

If those in-show graphics happen to be utilized in such a way as to make an advertiser’s inclusion in that show DVR-proof, all the better. That’s what The CW is doing during “The Flash.”

Twelve minutes into this week’s episode, after the first commercial pod of the hour had played out and mere moments after all of the credits for the show’s many writers and producers had been clearly displayed, a rectangle appeared in the bottom left corner. Changing graphics in said rectangle put forth the following information: 1) Take the “In a Flash” Weekly Challenge; 2) Using [the hashtag] #inaflashcontest; 3) Wednesdays at CWTV.com/InaFlash; 4) Featuring a New Fan Each Week!

The final image stated: Presented by AT&T. The image included the AT&T blue and white striped globe (or whatever one chooses to call it). 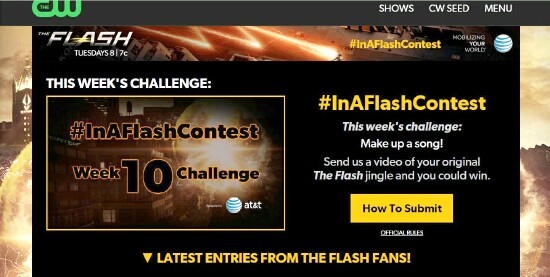 It was a win for everyone involved – except for that handful of beaten down viewers who still quietly object to such things. The CW promoted a contest that promotes its show and strengthens its community of fans while also driving viewers to CWTV.com. Viewers were enticed to actively engage the very next day with the network and the show. (The contest starts over every Wednesday. I would think it smarter to start each round of the contest during the Tuesday night premiere of each episode, because the audience for “The Flash” skews to the young side, and youthful attention spans aren’t what they used to be. By the way, it’s an ongoing contest and prizes include a T-shirt and the distinction of being the featured Fan of the Week.)

Also, AT&T got some premium screen time that won’t be lost on the millions of people who record the show, watch it at a later time and treat commercials as an annoyance, scanning through them as quickly as possible.

The show’s first commercial pod, which ran before the on-screen messaging about the AT&T-sponsored “In a Flash” contest, included an elaborate commercial for the contest that was obviously much more effective than a few small on-screen in-show graphics. If this continues, over time the title “The Flash” will be merged in the minds of millions with AT&T, just as “American Idol” during its peak years was almost synonymous with Coca-Cola.

For what it’s worth, I think the commercial might prompt DVR scanners to reverse course for a few moments, simply because it includes footage of the title hero racing about and that brilliant title treatment for the show. Once people become familiar with it they will almost certainly zip by it, but they will still see that message box on the screen a few minutes later.

With DVR penetration on the rise, I have to believe that full in-show commercials aren’t that far off. I expect the graphics to be plain and impactful. I’d like to say that I expect them also to be silent, but with visual clutter now effectively (if not hungrily) consumed by the masses, audio clutter will likely begin to infiltrate our entertainment and information gathering as well.