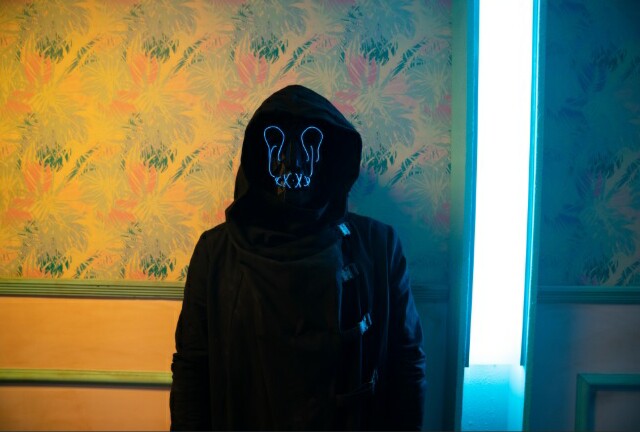 Imagine you’re being murdered.  Cool.  Now, imagine you’re being murdered right in front of where you live while your neighbors, who can all very clearly see and hear you from their respective windows, do nothing.  Great.  What you’ve just imagined is (more or less) the opening scene from Netflix’s Slasher: Solstice, the third season in the Slasher anthology series created by Aaron Martin.  Like most things that aren’t a comedy, I went into this series not knowing a whole bunch about it.  Turns out, as a colleague of mine once put it, this particular series is, in fact, a cut above the rest.

Slasher: Solstice centers on one apartment complex and its eclectic collection of residents during the summer solstice, the longest day of the year.  That night, a tenant from the building, whose name is later revealed to be “Kit” (Robert Cormier), is followed home after a solstice party filled with booze, drugs and mommy-daddy hugs by an all-black wearing psychopath with an admittedly badass LED rave mask on.  Long story short, this slasher, eventually known as “The Druid,” pulls out a huge kitchen knife and proceeds to murder Kit all up and down the hallways and parking lot of his complex while, you guessed it, his neighbors watch from their windows and do all of jack sh*t to help.  Fast forward one year, and its summer solstice all over again, which is great … for The Druid.  Not so much for everyone else. 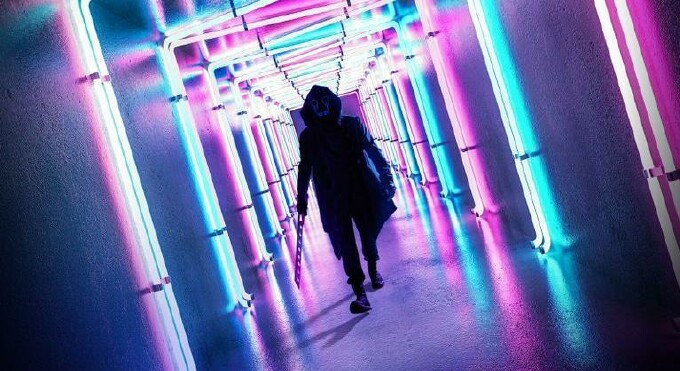 Martin has called Slasher “a character-driven contemporary murder mystery, set in a classic slasher film environment.”  So far, that tracks.  You’ve got your classic rookie cop/experienced cop dynamic with Detective Roberta Hanson (Lisa Berry) and her still wet-behind-the-ears partner, Pujit Singh (Ishan Davé), who investigate Kit’s death (among others).  Kit himself committed a horror movie cardinal sin right off the bat by both getting high and having sex, which is probably why his sexy party scene is first.  Two scenes later, he’s brutally murdered. Later on, it’s strongly implied through some blink-and-you’ll-miss-it nonverbal exposition that another character beats his wife.  Two scenes later, homeboy’s dead.  Another character, female this time, shows a certain level of sexual independence as well, but that horror movie sin seems to get cancelled out by her father’s rampant racism/alcoholism, making him the worse of the two of them and therefore probable murder fodder.  Then she goes to school and commits a hate crime.  Two scenes later … you get it.

Anyway, while the methodology of horror tropes may be the basis of the story being told, there’s also an element of trickery.  As we move through each episode, we continue to whittle down the cast/suspect list in attempts to figure out who our slasher is.  We get closer and closer with each murder, first by trying to figure it out during the attacks themselves (because only the viewers and the victims are ever present for those), then by taking into account that none of the deceased likely isn’t the killer.  This is where the flashbacks come in.

The flashbacks, among other things, are a way to disorient viewers and throw them off the trail of The Druid’s true identity, and believe me, they work, because whether or not you’re told if the scene that just started is a flashback seems to be a coin toss.  Sometimes, we get obvious indications, like the words “20 years ago” or “1 year later,” and sometimes we don’t.  This makes for a bit of confusion when, say, the person we’re watching dies, but turns up in the very next scene with people who don’t look different at all, because a year ago wasn’t that long ago. While the unceremonious appearance of this scene isn’t necessarily something new, I found it a little off-putting.  Why was knowing that this one scene happened twenty years ago more important than all the flashback scenes that had no title cards?  Why include any such graphics at all?

A quick side thought:  So, according to slasher movie rules Kit had to die, because he was a sexually adventurous junkie, right?  Was he, though?  I mean, he was, but according to all the flashbacks shown he was the most honest and straight forward dude in the building.  He didn’t cheat or give false expectations to his sexual partners (male or female), or his neighbors, or anyone else.  He keeps it funky with everybody.  He does what he does, with whomever he wants, whenever he wants, and doesn’t feel an ounce of shame about it.  Call him what you want, but that sounds like the freest person in this flick.

Regardless of all that, the multiculturalism of the cast, while confusing at first, is perfect for this style of story.  (I tried to place where this mishmash of ethnicities could possibly be.  Turns out it was Canada, which weirdly made perfect sense.)  The hate crime I mentioned earlier?  The victim was a Muslim girl named Saadia (Baraka Rahmani) who was literally minding her own business.  Saadia’s best friend?  A black girl named Jen (Mercedes Morris).  Jen’s mom?  In a same-sex relationship with a white woman named Amber (Joanne Vannicola).  Kit, literally the first character we meet, had gender-fluid sexual preferences, and Angel (Salvatore Antonio), who’s lowkey the actual star of the show, is a gay Latino.

What does this all mean?  It means by the rules through which slasher universes work, a lot of people are going to die, and the writers aren’t going to make it easy for anyone to figure out who’s doing the killing.  The presence of up-to-date character types coupled with the multicultural-ness of it all means that the basic interpretations of said rules have also been altered for a modern-day audience.  Will any of these rules matter at the end, when The Druid’s identity is finally known?  Probably not, but in the meantime, sexual promiscuity alone just isn’t enough to get you killed anymore.  Not in these modern times!  Now it’s the promiscuity-racism combo that’ll do you in.  Or being a low-level criminal who beats your wife.

Slasher: Solstice is a little over-the-top at times, but still entertaining as hell, and it’s a testament to the amazing actors who’ve been cast, the legitimately impressive work of the VFX teams (things get very gory, and it’s very awesome) and its modern day take on classic tropes. Being the worst in just one way isn’t enough to get you killed anymore.

Does this mean that the snarky-ass hipster barista with the handlebar mustache -- I’m looking at you, Xander (Jim Watson) -- you know, the one who waters down the skim milk and overcharges for lattes at his independent coffee shop -- still looking at you, Xander -- will definitely be brutally murdered?  I mean, not necessarily, but hey, a guy can dream, right?