Barbara Hall on Being an Executive Producer: “Women Have to Work Twice As Hard” 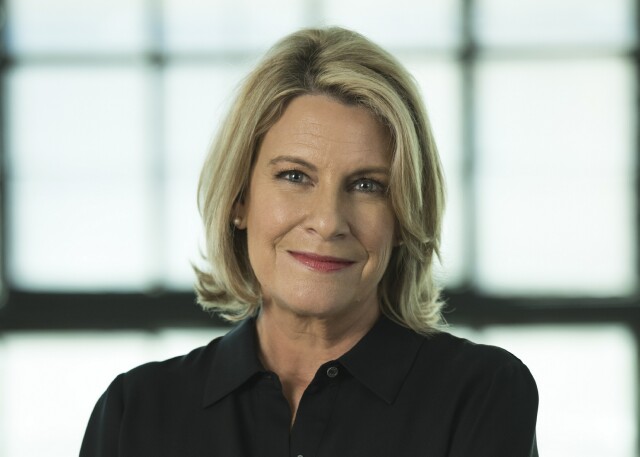 It’s about time that the world caught up with the strong women Barbara Hall has been creating for more than three decades.  On Judging Amy,Hall gave us two generations of fearless women, Tyne Daly’s crusading social worker and her daughter Amy Brenneman’s family court judge.  Hall’s current show, CBS’ Madam Secretary, which concludes its fifth season Sunday, April 21, stars Téa Leoni as Elizabeth McCord.  A former CIA analyst and academic, McCord throughout the series' five-year run has been serving as Secretary of State, but this season resigned to run for President.  Both parties are courting the independent McCord.  A wise woman, impervious to political winds and who, as a mother and wife also balances a family, McCord may well be what this country needs, a brilliant, compassionate diplomat averse to jingoism.

Hall, who has published 11 novels, worked on I’ll Fly Away, in which Regina Taylor’s Lilly Harper was a beacon of wisdom to a white family in the segregated South.  She also wrote for Showtime's much-honored Homeland, tackling tough stories about a dedicated CIA agent dealing with the challenges of bi-polar disorder.  As portrayed by Claire Danes, agent Carrie Mathison has developed into one of the most complex characters in the history of television.

Over the years, Hall and I have chatted about her shows, including the underappreciated Joan of Arcadia.  She spoke with MediaVillage about her career, and what follows is an edited version of that discussion.

Jackie Cutler:  It didn’t quite wind up as life imitating art, but you envisioned a woman Secretary of State with presidential aspirations.  What were you thinking of when you crafted Madam Secretary?

Barbara Hall:  I wanted to create a show about politics that is not polarizing.  I made it before the 2016 election.  And even more so now, what we wanted to make clear is this is a show not against a party.  It is a show against extremism on either side.  We just wanted to be sure that we made it clear this is a place where all sides could be discussed.

Jackie:  Why is it so critical to have strong women on TV?

Barbara: To show people what the journey looks like.  Popular culture always has an opportunity to give people a visual of what it can look like.  One of its strengths, and it is a very powerful thing, is seeing women in strong positions of authority for future generations, and even current generations, to visualize what it looks like.  I have e-mails from people whose daughters have decided to study poli-sci because of watching the show.

Jackie:  How did you become a showrunner and executive producer?

Barbara:  I always tell people that my story about how I broke in is not helpful for anyone.  It was a different time, and it was a strange way that it came together.  It wasn’t such a crowded field.  People didn’t know what writing for television was.  If you could write a spec script, and it made sense, and you could get an agent, you had a pretty good chance.  My sister (Karen Hall) was a pioneering female TV writer.  She was the first female writer on M*A*S*H and on Hill Street Blues.  I came out here, and my reasoning was if I had to starve, I didn’t have to freeze.  Because I was in L.A., my sister showed my novel to an agent, and there was some speculation it could be a movie.  This agent called me and said, ‘Do you want to write for TV?’ Sure.  I wrote a spec script and a play, and he was Gary David Goldberg’s agent.  I came in and pitched and got an assignment.  I started as a comedy writer and switched to drama.

Jackie:  Who were your mentors?

Barbara:  My sister taught me a lot.  Joshua Brand and John Falsey, who created A Year in the Life and Northern Exposure, and David Chase who ran I’ll Fly Away when I was there, and the comedy writer Barry Kemp, who created Newhart.

Jackie:  What are the differences toward women in TV from when you started and now?

Barbara: I was pre-Anita Hill.  It was a very different world; it was very much a man’s world, the pickiest of guys’ clubs.  I always worked with great guys.  I can say I got more than one job to be the “female voice.”   Often you would be the woman in the room, and that has changed drastically.  There are a lot of women writers working and a lot of women getting to the point of running shows.  There are plenty of women, and we need more.

Jackie:  What’s your advice for younger women who want to go into the business?

Barbara:  As women, you know what you are up against.  You probably have to work twice as hard and can’t make as many mistakes and be aware it is just a fact.  It is a fact that women, not just in this business, get punished for what men get rewarded for in terms of this job as a creative person.  You have to be aware of what your point of view is as a creative person.

Jackie:  What is your goal with Madam Secretary?