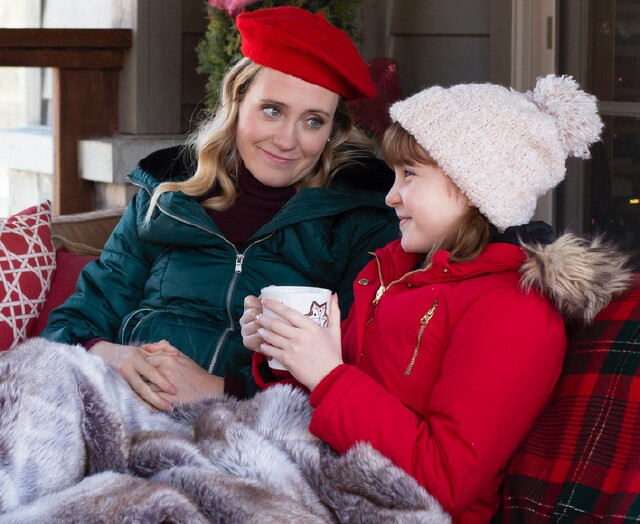 Continuing a Christmas tradition that began with A Very Country Christmas in 2017 (and continued in May of 2019 withA Very Country Wedding), UPtv is kicking off its Merry Movie Christmas holiday programming event on November 1 with the premiere of A Very Country Christmas Homecoming. The film reunites original stars Bea Santos, Greyston Holt, Deana Carter, Mike Shara and Raven Stewart (pictured at top with Santos) for a third installment as newlyweds Jeanette (Santos) and Zane (Holt) return from their honeymoon to begin the holiday season.

For many UPtv viewers, the Gunther family has become a part of their own through this franchise, and that’s something Santos doesn’t take for granted. "Doing these movies has been a total pleasure," she told MediaVillage during an exclusive interview. "I love the crew at Brain Power (Studios) who make these movies, and my TV family. It always feels like a little family reunion getting together, and just a really positive experience that does feel like Christmas every time.

"When I get back to that studio it just feels like we never left," she continued. "I've never laughed more on any set than on the Very Country Christmas set. It's just laughter and song. It's not like a horror movie or something. We actually wrapped [this one] the day before everything shut down. The last normal day I had was on the set of A Very Country Christmas Homecoming. We shoot these fast, and it's just sort of like being in a movie bubble, then you go home. I guess we were shooting at the end of February and then halfway through March." 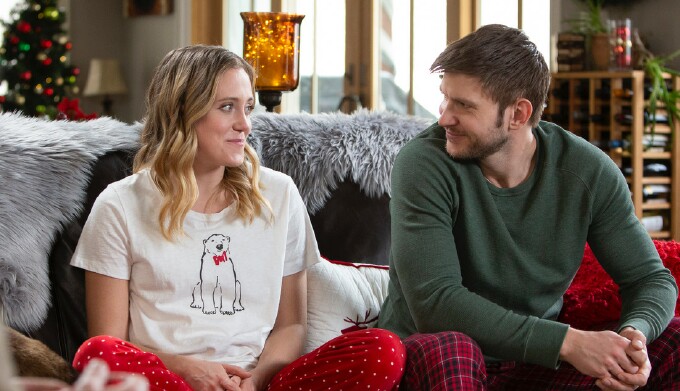 For Santos, getting to celebrate the 2019 holidays, only to return two months later to make some holiday movie magic, is nothing new. "I guess I'm always like half in the holidays," she laughed. "I’ve either just finished one of these movies, or I'm about to start one. I'm sort of always a little bit halfway to Christmas no matter. But [this movie] was definitely a very positive send-off into quarantine isolation. You would never know what was going on in the world from what we were shooting. It's such a positive and happy movie."

While her character does embark on something of an emotional rollercoaster this time around, having to deal with the past loss of her first husband, Santos is happy to share the film's strong message of family during the holidays. "It's a timeless message," she said. "Love can come out of anywhere at any time, and what the movie really drives home is you can make family out of whomever you choose, and Christmas is a time when everyone comes together. I think these movies do a really good job of doing that, and this one is just a beautiful movie about healing and family and forgiveness."

One thing not lost on the actress is how fortunate she feels to be a part of a franchise, as it’s something she never expected. "I just auditioned like I usually do four times a week," she recalled. "But I do remember spending extra time thinking about who this person was because in the script she was extremely sweet, a good listener, and all the things that make Jeanette who she is. So, I auditioned, did what actors are trained to do. [You] put everything into it, and then you just completely forget about it.

"I think it was maybe a month later, which is a pretty long time after you audition to find out, when I got a call and it was something like, 'They need you there on Monday,'" she continued. "This was on a Friday! I was in the car coming back from an audition for an action sci-fi thing, like the complete opposite, when my agent called. There's absolutely no way that I could have predicted that [the role] would become what it has."

As for her movie family, Santos considers them to be the real deal. "One of the best parts about this is, I'm not a mom in real life, but it's been fun watching Raven who plays Quinn in the movies grow up," she explained. "I think she was eight in the first one, and she’s now like 12! I really love Raven. It was really easy to play her mom. And Greyston (pictured above, right) is just so likable. We are good friends now. I can't imagine doing [these] without him, and I hope he would say the same. We are usually in contact and I feel like he's my film partner because we have been doing them for so long."

While there’s no news on a fourth installment, Santos is already thinking of ideas. "Maybe in the next one we can do a Partridge Family-style (road-trip) singing thing," she laughed. She’s looking forward to continuing these characters, and anytime UPtv calls, she’s ready to answer. "That would really brighten my day," she smiled in closing. "This is a time a lot of people are turning to movies for entertainment and I can't think of a better platform than UPtv, which is about uplifting messages. That really couldn't come at a better time."