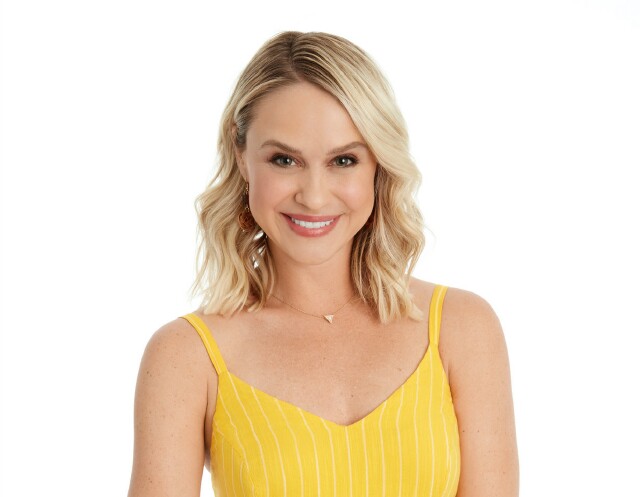 After being welcomed to the Hallmark Channel family via two Christmas movies, A Song for Christmas (2017) and Love at First Dance (2018), multi-talented actress/singer/dancer Becca Tobin returns this weekend starring in Sister of the Bride.   Getting to shoot this one in California was a welcomed change after the other two in wintery Canada.  "It was the first time I’ve gotten to stay in the United States to shoot one of these," she laughed when MediaVillage spoke with her exclusively about the project.  "I do have to say, while I very much love shooting in Canada, this was convenient as I got to come back to Los Angeles on my days off and see my husband, our dog, and get some laundry done, which was really nice.  We got spoiled shooting in Palm Springs.

It's my third Hallmark movie," she continued. "I've done one each year for the last three years and I'm so, so, grateful. The people I've worked for and with at Hallmark are simply the nicest group. Hallmark really feels like a good fit for me and it just keeps getting to be more fun. I hope it's something that continues for a long time."

In Sister of the Bride, Tobin (pictured at top and below) plays Stephanie, an anthropology professor who accepts a proposal from her boyfriend Ben (Ryan Rottman, pictured below) after dating for just six months. In an effort for the family to get to know him, together they head to her parents’ vacation home in Palm Springs to break the engagement news, but upon arrival they discover Stephanie’s sister Tracey (Chelsea Gilson) and longtime boyfriend Preston (Brad Benedict) have also become engaged. 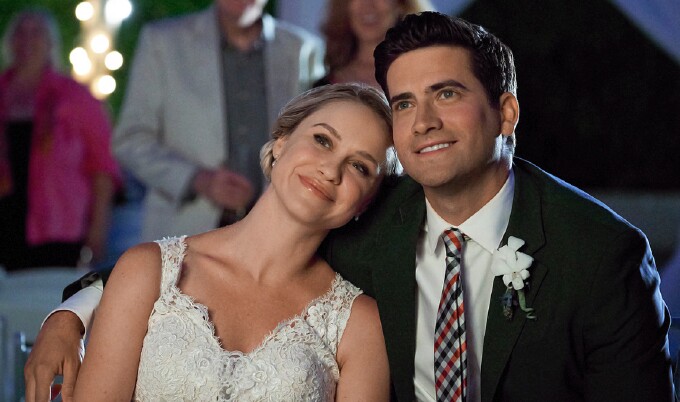 With both sisters wanting July 4th weddings at the family home, Stephanie decides 2020 best suits her and Ben, while Tracey doesn't want to wait. Unbeknownst to both sisters, though, the family retreat is being sold. When they find out and realize they have only four weeks to plan the wedding, the crunch is on. As the two couples feverishly begin preparations, it becomes evident Stephanie's father has an issue with Ben, who broke tradition by not asking his permission to propose. On top of that, Ben is offered a dream job in Oxford, England, raising questions about their future; how well they really know each other; sacrifice, and if Ben might be the right guy for Stephanie after all.

For Tobin, it was those question of tradition and sacrifice that rang most true. "My husband and I come from very traditional families but are probably the most alternative child in each family," she explained. "Tradition is in our roots and when we got married, we mixed a little bit of [that] with a little of our own. But he did ask my dad for permission, which was really important to me. I do understand why it is an issue in the movie.

"My husband and I did the long-distance thing, as he was living in Atlanta and I was in Los Angeles when we started dating," she added. "A lot of his work was on the east coast while mine was on the west, so there was a lot of compromise. Ultimately, he ended up moving to Los Angeles, so it worked out, but we both made sacrifices and compromises. In the beginning, it was a great test to see if each of us felt the other person was worth changing our whole lives for and I liked that. Give-and-take is awesome when it happens.”

With Tobin's own nuptials, which she and her husband planned in just two months, she chose to have only her sister by her side as bridesmaid/maid of honor, making her character even more relatable. "Career and family are the two top priorities in my life," she shared. "My sister and I are so close, and I love the way they wrote [Stephanie] in that she’s soft and feminine, but strong in her determination. Having a lot of respect for her made her a fun character for me to play. Also, the decisions that she [makes] were very similar to the things I would've done."

The former Glee star told me her husband is thrilled about her Hallmark connection. "He loves these movies,” she exclaimed. “Of all the projects I do these are the ones his family and friends get the most excited about. He's really proud of me and I can tell that it's fun for him. In the grand scheme of things as an actress, Hallmark movies aren't too racy and he knows it could be much worse, so he's thrilled. Although, there was a little more canoodling and kissing in this one [than usual].

"It's interesting starting one of these projects," she continued. "You [and your co-star] have to feel like you're already a couple and that can be challenging. I believe the first day of shooting we had to kiss, so it was like, ‘Nice to meet you,’ and an hour later we’re kissing. It's weird, but Ryan was such a team player and made it so easy to jump in. We just had a great connection from the get-go and loved goofing around. I've had really good luck with all the guys I've worked with at Hallmark; they really know how to pick great guys who are perfect gentlemen. They're also not bad to look at -- right? I have no complaints as they do a pretty good job in that department."

Now that she’s donned a wedding dress for a project, Tobin is hopeful there’ll be another Christmas movie in her future. She’s also grateful to the Hallmarkies who, after playing bitchy Kitty on Glee (a show she would gladly welcome returning to, should there be a reunion), have warmly embraced her. "I’ve received the nicest messages from people from the start," she said. "Viewers telling me how much they loved the Christmas movies and they can't wait for the June Weddings movie. It's so nice they are following my journey with Hallmark, as they are the nicest people, and the community they've built is incredible. They're like a ‘family’ -- the Hallmafia! That should be a thing!"

Sister of the Bride will be is telecast Saturday, June 29 at 9 p.m. on Hallmark Channel as part of its annual June Weddings programming event.