“Becoming Us” Continues TV’s Take on the Transgender Community 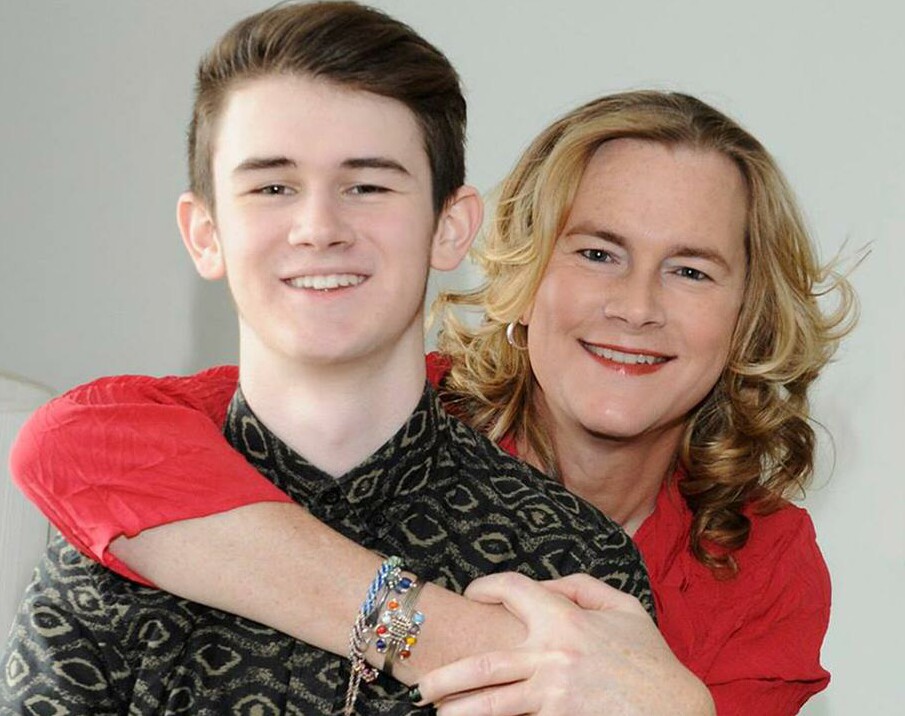 Continuing with the hot television trend of the moment – call it Transgender TV – ABC Family this week introduced a new observational reality series that explores the subject from the point of view of two teenagers who are both experiencing the same extraordinary changes in their lives.

Those teens are Ben, a 16-year-old high school junior whose father, Charley, is now a transgender woman named Carly, and Ben’s girlfriend Danielle. (Ben and Carly are pictured at top.) Interestingly, Danielle is handling the same situation at home. Her father, Daniel, is transitioning and still prefers to use his name.

It’s an interesting dual dynamic, because Carly and Daniel are so very different. Daniel seems a little more in touch with his daughter’s feelings if somewhat tentative about his own. (Danielle says her father still considers himself “a guy.”) He has been transitioning longer than Carly but has not yet reached the same level of self-assurance.

Carly, on the other hand, seems to be all about confidence, but who really knows? (If that’s the case, more power to her.) That said she strikes me as trying to act or come off as somewhat younger than she is, and she seems not to be as focused as she perhaps should be on her son. I know that sounds judgy, and I may be completely wrong. I only know what I see on TV, where real life is shot, edited and packaged to meet specific creative demands. (That’s what Lifetime’s terrific, can’t miss new drama “UnREAL” is all about.)

Having a parent in transition seems like a lot of pressure to put on a kid Ben’s age, though it is probably not as much as Charley experienced in his young adulthood. As I watched I could only wonder if high school is as unrelenting in its daily challenges today as it was when I was a teenager. I know of two schools of thought on that subject, but this column isn’t about the “typical” high school experience. The focus here is on the atypical lives of Ben and Danielle, who is as impressive as Ben in her mature response to the changes her own dad is going through.

One of the most distinctive and refreshing qualities of this show is that, as comparatively cool and chill as Ben is with it all, he isn’t above making certain strong statements about the curveball life has thrown at him. “I thought I knew exactly where my life was headed … until she came along and everything got turned upside down,” Ben, in narration, says of Carly. “I know she’s going to be around for a while, so I’ve got to do whatever I can to figure this out, so [we] can just understand each other.”

Ben hits the wall in his own quiet way toward the end of the first episode, when Carly sits him down to tell him that she is going to have gender reassignment surgery. “My boy parts are going to become girl parts,” she says.

This news is difficult for Ben to process. “It’s kind of official that my dad is gone,” he tells Carly, admitting that he feels anger. “The person that made me will not have the thing that made me.”

Most reality programming feels fake, and as we know some of it is totally false (again, don’t miss “UnREAL”). I have no idea where “Becoming Us” sits in the realism spectrum of reality television, but Ben’s comment struck me as exactly the kind of thing a 16-year-old boy might say when hearing such news from one of his parents. He’s thrown for a loop.

Later – after blowing off some steam by screaming his lungs out on top of a skyscraper – Ben ruminates, “I love my mom. Dad. Dad-mom? But it doesn’t mean that I understand what she’s doing.”

After that he sums up his situation with that casual brilliance teens sometimes exhibit, the likes of which generally surprise everyone, including themselves. “Who knew my dad would become a woman at the same time I was becoming a man?” he wonders.

Ben and his very understanding mom, Suzie, live in a seemingly modest home in Evanston, Illinois, a suburb of Chicago, which brings up another important point – they don’t appear to be wealthy. With all the media attention currently commanded by the real-life story of super-rich Caitlyn Jenner I have yet to hear much (if anything) about the financial challenges that can compromise or prevent a full transition.

I’m acquainted with a young man -- I’ll call him Jake -- who lives with his parents and brother in a working-class Connecticut suburb and has been transitioning for several years. His courage, openness and resourcefulness has been nothing less than inspirational. His is a typical family in many respects, challenged in recent years by our problematic economy and doing their best to make ends meet just like tens of millions of families around the country.

Significantly, the two people who have had the most difficulty dealing with Jake’s transition are his parents. To their credit they never rejected their teenage daughter – I’ll call her Jane – when she came to them and told them of her decision to become the person Jake now is. They are still uncomfortable with it. They aren’t all the way there yet. But they will be.

I think what has surprised Jake’s parents most about the entire experience so far was the immediate acceptance of their child’s transition by family, friends and everyone else in their lives. I’ve not heard of any negative responses from anyone when they learned about Jake. Rather, one of his greatest obstacles in all of this has been financial. His transition has been a slow process; one that continues to this day because of the time it is taking to earn the money required for medication, therapies, surgeries, etc.

In that respect I am certain Jake cannot fully relate to Caitlyn Jenner, for whom top-level care has been no object. (Read my take on Caitlyn's instant stardom here.) I don’t know if Jake will be able to identify with Carly or Daniel, either, though their incomes appear to be much closer to something resembling normalcy than anyone we have ever met on any of the Kardashian programs. Like most things involving medical care and treatment these days, the transgender process must be a whole lot easier when money isn’t an issue, especially with the skyrocketing costs of actual health care of every kind on every level.

I hope Caitlyn and her family, every member of which has financial resources few of us can imagine, will find ways to speak out on this subject and generate support for those individuals and families that are dealing with these same identity issues but do not have the money necessary to act on them. Even for working class people with insurance a simple blood test can throw a monthly household budget into freefall. I can’t imagine how difficult it must be for working and middle class individuals to handle the financial demands associated with transitioning.

That may be the next aspect of this very timely topic that a smart television series will dare to explore.