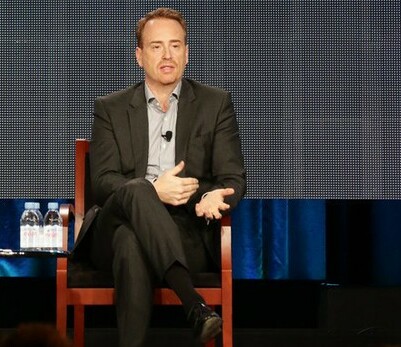 Pasadena, CA – NBC on Friday offered one of the liveliest days at the Winter 2015 Television Critics Association tour, which included sessions for "Celebrity Apprentice" with the always attention-commanding Donald Trump and the competitors who were still on the show as of last week (several of whom are pictured with Trump below), the new drama series "Allegiance" and "Odyssey," the new sitcom "One Big Happy" (the panel for which included executive producer Ellen DeGeneres), the returning comedy "Undateable," the upcoming miniseries "A.D. The Bible Continues" (a continuation of last year's hit History miniseries "The Bible" from executive producers Mark Burnett and Roma Downey), returning summer series "The Night Shift," the certain to be controversial miniseries "The Slap" starring Uma Thurman and Zachary Quinto, current dramas "Chicago Fire" and "Chicago P.D." and the soon-to-depart sitcom "Parks and Recreation." (Critics feasted on waffles with all the trimmings from JJ's Diner during the latter.) 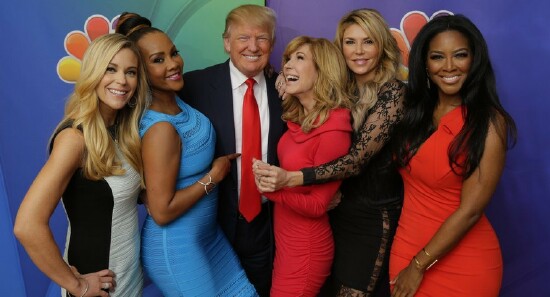 The excitable tone of the day was set during the first panel, a Q&A with NBC Entertainment Chairman Robert Greenblatt and NBC Entertainment President Jennifer Salke. Greenblatt started off on a light note, with the following announcement: "We're developing a series about Hillary Clinton and one from Bill Cosby … wait … that was from the previous TCA."

Those were indeed two of Greenblatt's big announcements at the Summer2014 TCA tour, but the Clinton project fell through shortly thereafter and the series starring NBC legend Cosby, which hadn't advanced from the very early stages of development, got cancelled because of the recent allegations of sexual abuse by its main man.

When the Cosby situation came up later in the session it was no laughing matter. In fact, Greenblatt revealed fresh information about Cosby's past that some critics found shocking, and when further questioned about it he became a bit terse. In truth, his response was a refreshing change from the rote answers most network executives give to most questions during TCA sessions.

It all started innocently enough. "Given everything that's happened, is it safe to say that NBC will not ever in the future do any project with Cosby?"

Another critic asked, "Can you talk about what happened on your end to eventually lead to the point where you dropped it?"

It was at this point that Greenblatt first sounded a bit on edge. "Yeah," he replied. "You know, 15 women came out and accused him of having done what they accused him of."

Then came the new information.

"While over the years we'd heard some of those accusations and we knew there were a couple settlements and whatnot, it didn't seem to be the sort of thing that was critical mass," Greenblatt continued. "When we realized that there seemed to be so much more of it, it wasn't something that we could go, 'Oh, we're not sure.' Look, he hasn't been proven guilty of anything, so I don't want to be the one that says guilty until proven innocent, but when that many people come out and have similar complaints and it becomes such a tainted situation, there was no way that we could move forward with it."

The critic – indeed, much of the room – wasn't entirely satisfied with that answer. "Sorry. I need to follow up on that," he pressed. "You say you knew that there had been these issues. You knew there had been settlements. What is the point at which something becomes critical mass, the point at which you can no longer ignore things and you have to go, 'Okay, we don't want to be in this business'?"

The critic soldiered on, wanting Greenblatt to put a number on it. "So 15, yes; 2 or 3, no?" he asked, sounding a bit annoyed himself.

"Yeah," Greenblatt said, now sounding defensive. "You want me to put a number on it? 15, yes, 2, no. You really want me to answer that question?"

"It's a serious question," the critic continued.

"All I can tell you is there are a lot of people who have been in business with Cosby for 25 years, and go ask them the same question," Greenblatt said. "I just answered what I could answer. I didn't think it was a problem until it became critical. So I don't know what else I can say about it."

The rest of Greenblatt's session was filled with uncommonly interesting news. He announced that NBC just closed a deal with Eva Longoria for a 13-episode single camera comedy series titled "Telenovela," which will be set against the making of a telenovela. (Longoria will produce and star.) The series may offer Spanish-language subtitles for Latino viewers.

Greenblatt also told us that Zachary Levi, the popular star of the long-running NBC series "Chuck," has been cast in the upcoming continuation of past hit "Heroes," the miniseries "Heroes Reborn."

Next up was the announcement that NBC is moving forward with a miniseries titled "Freedom Run" about the Underground Railroad. Stevie Wonder is one of its producers. Interestingly, after the miniseries is produced Universal Theatricals (which Greenblatt also oversees) plans to develop a Broadway musical adaptation of it. Greenblatt said "the hope" is that Wonder will write an original score for the stage show.

On the subject of musicals, Greenblatt later said that the network's annual live musical production in December will likely be either "The Music Man" or "The Wiz."

The exciting announcements – more, perhaps, than those made during this TCA tour by all of the other broadcasters combined – kept coming. NBC is developing a series of television movies with Dolly Parton that are based on her songs and her life. Her music will be featured in them. Greenblatt envisions them as movies the entire family can watch together.

Further, Greenblatt said that production begins in June on a new drama starring Jennifer Lopez titled "Shades of Blue." Greenblatt described it as "a dark cop show." He also revealed details about a new detective thriller titled "Aquarius," which is set in Los Angeles in the late Sixties and stars David Duchovny as a detective from the LAPD who crosses paths with a young Charles Manson. Jennifer Salke later told me that "Aquarius" would be a summer series. Greenblatt told me it is currently structured as a five-season story.

Greenblatt also said that development of the long awaited period drama "The Gilded Age" from "Downton Abbey" creator and writer Julian Fellowes would soon begin. It's about the millionaires who ran New York City in the 1880s.

Critics were very interested in the move next month of the network's sophomore hit "The Blacklist" from Monday to Thursday (after a big post-Super Bowl push).

Thursday – for decades the night that NBC largely owned – "has been a problem for us for the last few years," Greenblatt admitted. "It used to be the big night of television for NBC, and that has sort of winnowed away. It's an important night for a lot of reasons, not the least of which is advertising. It's a very desirable night for advertisers. It's a night leading to the weekend. It should be a big, exciting night of television. We think that while the move of 'Blacklist' is certainly risky, the only way to really reinvigorate that night is to jump start it with something like [that]. Surrounding it are two other dramas which I believe are really strong, 'Allegiance' at 10:00 and 'The Slap' at 8:00. We're trying to create a new night of really high quality drama, which hopefully will bring an audience."

Some critics expressed concern that "The Blacklist" might not perform as well on Thursday opposite strong competition on the other networks. But Greenblatt put it all in perspective. "[About] 60% of the total audience that watches that show doesn't watch it on Monday night anyway," he said. "The audience is going to shift the show and watch it when they want. Hopefully it will be a big enough live number to help turn the tide on that night."