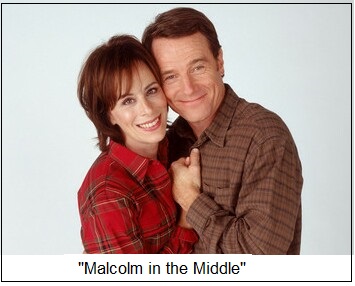 Sometimes the best things really do come in small packages, as we have seen online during the last week.

A video that will reportedly appear in the upcoming DVD release of the complete series of "Breaking Bad" was somehow leaked online a few days ago and was instantly everywhere, generating a ton of free publicity for that DVD release but also evoking fond memories of the best sitcom finale ever and a turn of the century comedy that, while popular, was never really given the appreciation it deserved.

In the video Hal Wilkerson, the frequently befuddled character "Breaking Bad" star Bryan Cranston portrayed for seven seasons on "Malcolm in the Middle," awakens in bed fresh off a harrowing dream in which he was a mild-mannered chemistry teacher turned monstrous meth manufacturer. Sleeping next to him is his wife Lois, once again played by Cranston's "Malcolm" co-star Jane Kaczmarek. Hal tries to tell her about his disturbing dream and the strange characters in it, but all Lois can say is, "Go to sleep, Scarface."

This video may have been primarily intended as a DVD extra on one of the most hotly anticipated DVD releases of this holiday season. But it is also an unashamedly loving homage to the classic closing scene in the series finale of the hit Eighties sitcom "Newhart," in which Bob Hartley, the character Newhart portrayed on the hit Seventies sitcom "The Bob Newhart Show," awoke in his bed (in a very familiar looking bedroom) fresh off a strange extended dream in which he was a Vermont innkeeper. Sleeping next to him was his wife Emily, once again played by his "Newhart Show" co-star Suzanne Pleshette. Bob tried to tell her about his disturbing dream and the oddball characters in it, but all Emily could say was, "That settles it. No more Japanese food before you go to bed." (In the "Newhart" finale, the entire Vermont town that characters lived in had been purchased by a wealthy businessman from Japan who wanted to turn it into a resort.)

The whole world went wild for this video during the brief time it was available on YouTube before Sony Pictures Movies & Shows yanked it citing copyright issues. I'm sure it will resurface again soon, but I have to wonder, in lieu of the loud and loving response it received, why didn't Sony decide to leave it online? One could argue that no other publicity for the DVD release of "Breaking Bad: The Complete 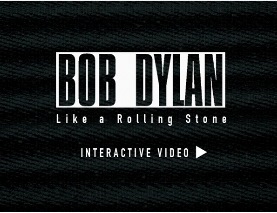 Series" would be required.

At the same time that the "Breaking Bad"/"Newhart" video appeared, along came another promotional video for the packaging of another entertainment classic. It's the first-ever music video for a song that is almost a half-century old, Bob Dylan's "Like a Rolling Stone," which hit Dylan's official Web site just before the arrival of his mega-CD release "The Complete Album Collection Volume 1."

The video, produced by Interlude, is truly a game-changing, ground-breaking, utterly remarkable thing, thrillingly interactive in a way that may never have been seen before. The best way to describe it is to say that it functions as 16 different videos in one, each of them featuring different people lip-syncing "Like a Rolling Stone" in completely different environments. (There are a few celebrities in the mix, including Drew Carey of CBS' "The Price is Right," the stars of HGTV's "The Property Brothers" and the guys from History's "Pawn Stars.") The viewer can literally click through all of them (using arrows on the left side of the screen), but here's the crazy part: No matter when or where one clicks, the people in the environment one lands in pick up the song exactly where the people in the previous environment left off.

Interacting with this video is one of the most amazing online entertainment experiences I have ever come across. It's totally addictive in the best way. It will leave you smiling for hours, and it will make you happier than an afternoon spent watching cat videos, including this one.

By the way, there is another very cool interactive online video over at The Johnny Cash Project in which people are offered the opportunity to create a black and white portrait of Cash as they think of him via a special drawing tool on the site and add it to a music video for

Cash's final studio recording, "Ain't No Grave." As people from all over the world add new portraits to the project, the "Grave" video continuously evolves and never plays the same way twice. The experience is both touching and haunting no matter how often one experiences it.