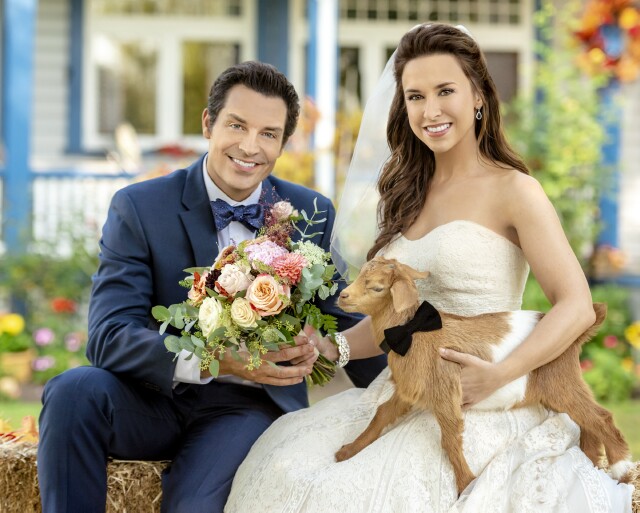 Since beginning his association with Hallmark Channel in 2012's Cupid Inc., Canadian native Brennan Elliott has become a permanent fixture there.  He appeared on Cedar Cove as the villainous Warren Saget before being fast-tracked to leading man status and teamed with Lacey Chabert for 2015's All of My Heart and A Christmas Melody (directed by Mariah Carey).  That union proved extremely serendipitous, producing a sequel to the former, All of My Heart: Inn Love and now another, All of My Heart: The Wedding, premiering Saturday.  Neither star knew a franchise would be born when filming the first, nor that the old friends would be dubbed the Spencer Tracy and Katharine Hepburn of Hallmark.  "A crewmember once made that remark," laughed Elliott when I made the comparison in an exclusive MediaVillage interview.  "I consider that to be one of the greatest honors, period.  Spencer Tracy, to me, is one of the greats of all time.

"[We] didn’t think the first one would be a ratings hit and become a fan favorite," he continued.  "But we are so glad about that, and whenever they call to do another or a bunch of them we are up for it.  It's whatever the fans want.  Lacey and I have this on- and off-camera relationship that's based on trust.  Anything she suggests to do in a scene is always from a place of true friendship, so we do edge each other on to do the best work we can."

In this continuation of their love story (for which he and Chabert also served as co-executive producers), Jenny (Chabert) and Brian (Elliott) are hard at work running their B&B while planning their wedding and exploring how to expand Jenny’s Home Baked pastry business.  But when mystery woman Meg (deliciously played by Pauline Egin) checks into the inn, Jenny feels something is amiss.  Meg reveals she is Jenny's distant cousin, making her a rightful heir to a third of the property they jointly inherited, and that revelation turns life upside-down and the prospect of losing the home they love a reality.

Elliott is thrilled fans of the franchise are getting an opportunity to see the once- bickering strangers become a cohesive couple.  "I feel with this one it was an important element to their journey," he shared.  "When you meet and fall in love with that special someone there is a feeling out process; then the ‘honeymoon phase,’ and then the settling part where you get to know each other as people.  I feel this movie encapsulates us together as a unit and captured the maturity of their relationship."

Having played the villain (a rarity for a Hallmark actor) on Cedar Cove, Elliott had high praise for the movie’s villain (Egin), expressing appreciation her bravery at walking into an idyllic love story with the intent of destroying it.  "Pauline is such a pro," he raved.  "Coming on board a franchise with established characters, and knowing how much the fans are protective and rooting for Jenny and Brian, it was daunting.  She handled it with class and grace.  I remember being in scenes with Pauline and thinking, ‘Wow, this woman is dark!’  The movie is called All of My Heart:  The Wedding and she just crushed everyone's heart with one sentence.

"She was also a pleasure to work with," he added.  "So, hopefully fans will see her as a character.  After playing Warren on Cedar Cove, I know that Hallmark fans can either support or 'get on' the bad guy.  But I give credit to the fans as they came around and knew I was playing a character.  I told Pauline she was a necessary evil in this movie and I think the fans will learn to like her … but in the beginning I really don't think they will."

Elliott is delighted with the finished film and was also happy to share some exciting news -- he and Chabert are launching a new movie franchise for Hallmark Movies & Mysteries.  The first, A Crossword Mystery, is completed with more planned.  “It was a little weird,” he laughed.  “We finished All of My Heart: The Wedding and a week later we were on a plane to do A Crossword Mystery. It's a little like Hart to Hart in style, or maybe even Moonlighting.

“I play very tough detective, Lacey is an intelligent person who decodes and edits crossword puzzles, and together we solve crimes,” he added.  “It's a very different dynamic, but the Hallmark fans are very smart so they'll [likely] watch it and go, well it's Brennan and Lacey, they’re just different characters and we love this, too.”

Still, All of My Heart fans should not despair.  Just because the on-screen dynamic duo is switching gears to solve crimes, don’t think you've seen the last of Brian and Jenny.  "I would be very hard-pressed to say this won't be returning," Elliott said.  "I'd love to see it as a series or at least a holiday themed thing each year.  If the fans want it, and the powers that be at Hallmark listen to the fans, I'm assuming it's a conversation we’ll be having in the near future."

All of My Heart: The Weddingwill be telecast Saturday, September 29 at 9 p.m. as part of Hallmark Channel’s Fall Harvest programming event.