“Broadchurch,” on BBC America, Remains One of TV’s Top Dramas 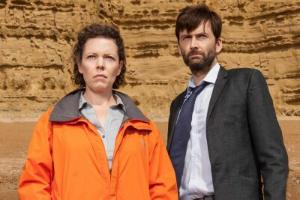 The usual “big” shows – AMC’s “Mad Men,” CBS’ “The Good Wife,” Netflix’s “House of Cards,” FX’s “Justified,” to name a deserving view -- have lately been getting most of the attention as usual from critics who pride themselves on championing television’s top dramas. But I’d like to throw some renewed support here to one that seems to have slipped under the radar – BBC America’s “Broadchurch,” now in its second season.

The usual “big” shows – AMC’s “Mad Men,” CBS’ “The Good Wife,” Netflix’s “House of Cards,” FX’s “Justified,” to name a deserving view -- have as usual been getting most of the attention lately from critics who pride themselves on championing television’s top dramas. But I’d like to throw some renewed support here to one that seems to have slipped under the radar – BBC America’s “Broadchurch,” now in its second season.

Admittedly, I didn’t see the need for a continuation of this devastating tale about the loss and despair that overtake a small ocean-side town after the murder of a little boy. The story told in the eight episodes that comprised the first season felt very formal and complete, coming to a profoundly depressing but perfectly fitting end. All of the characters involved, from the family of the little boy to the family of the killer to the detectives charged with solving the case and all of the townspeople in between, were left to put back together the shattered pieces of their lives. The ending accurately reflected and respected the devastating pain people find themselves in after so wrenching a loss and so terrible an act.

In other words, in season one “Broadchurch” felt achingly real in its presentation of death (in this case murder) as a malevolent berserker capable of destroying everything in its path, leaving behind lives forever compromised. You would never know it from the way characters on most television series bounce back from such things – especially on crime dramas with their murder of the week structures -- but the impact of loss can be relentless, and grief often lingers for longer than most people realize, sometimes refusing ever to go away.

“Broadchurch” got that right, right from the start, which was why the thought of a second season was at first so off-putting. How believable would it be for the residents of a locale as small as the title town (more a village, really) to be seen putting so terrible and destructive an incident behind them and carrying on? Could viewers be expected to believe that anything else happening to them would somehow eclipse what they had already been through?

Of course not, and that’s why season two is also spot on. Rather than shove aside what appeared to be a complete story from season one, the creators of this fine series chose to re-activate it with an exasperating development that plunged everyone involved back into their collective, all-encompassing nightmare.

The results so far have been as engrossing as anything else on television. (I was sent all eight episodes in advance and binged right through them, something I rarely do with any series, including the best that Netflix and Amazon have to offer.) Much of the credit goes to the primary and supporting cast members who returned to reprise their roles and continue their characters’ personal dramas. David Tennant (still the best Doctor Who of them all) as weary and ailing Detective Inspector Alec Hardy and Olivia Colman as Detective Sergeant Ellie Miller, who endured a very specific horror of her own in season one, are once again at the center of everything, but they are sharing the spotlight with two sensational additions to the ensemble, Charlotte Rampling and Marianne Jean-Baptiste as dueling barristers Jocelyn Knight and Sharon Bishop, respectively. Watching them play against each other during their scenes at trial is, in a word, thrilling. (Colman, Rampling and Jean-Baptiste, it goes without saying, ought to be considered for every award available to this show.)

“Broadchurch” has also layered in a second story about the murder case that brought Detective Hardy to town in the first place: The disappearance of a teenager and the murder of her 12-year-old cousin. It isn’t as engrossing as the case of the little boy murdered in season one, perhaps because very little could eclipse the impact his death has had on so many people. But it does bring fresh excitement to the franchise and a deeper understanding of Hardy’s troubled past.

It’s easy to tell stories about all kinds of murders and explore their immediate aftermaths, especially the pursuit of justice that follows. It’s quite another to examine the long-term impact such killings have on the loved ones and acquaintances of the victims, not to mention the detectives assigned to investigate. That’s a huge challenge, one very difficult to get right and also make interesting and entertaining.

“The Good Wife” continues to do an outstanding job of this, still exploring the aftermath of the killing of Will Gardner last season, especially the impact that it has had on his friend and lover, Alicia Florrick. Now “Broadchurch” is doing something equally impressive, boldly taking on one of dramatic television’s most intimidating challenges and getting it exactly right. And here's more praise: Season two doesn't end in any of the ways viewers might assume as they watch. But the conclusion is, in its own way, just perfect, which is how one should regard this series as a whole.

The opinions and points of view expressed in this commentary are exclusively the views of the author and do not necessarily represent the views of MediaBizBloggers.com management or associated bloggers. MediaBizBloggers is an open thought leadership platform and readers may share their comments and opinions in response to a