Cable at TCA: Kelsey Grammer Shows the Press Who's Boss, BBC America Throws an Epic Party, Too Many Networks Skip the Tour and More - Ed Martin 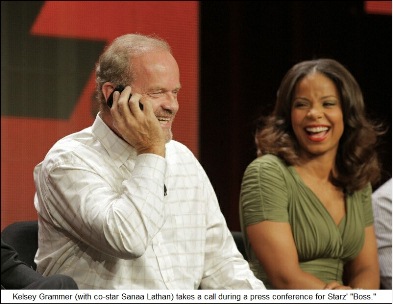 Kelsey Grammer needs a lesson in manners. That was the buzz yesterday at the Summer 2012 Television Critics Association Tour. During an otherwise very effective press conference for his Starz series "Boss," which is noticeably improved in its upcoming second season thanks to the addition of Jonathan Groff and Sanaa Lathan to its cast, Grammer received a call from his wife on his cell phone.

"I have to answer this for one second," he told the critics. Then, over the course of almost two minutes, he proceeded to chat with his wife. It sounded something like this: "Hi, honey. Okay, cool. I'm on stage right now, but go ahead. Yeah. Oh, that sounds great. That's great. You know, they should bring the truck up. They should bring the truck so they can go to Universal after that. Okay. Call Stan, though, because he'll be able to get to you. Okay. That's okay, honey. They're enjoying this. It's the whole Press Tour."

The truth is, while many of the young bloggers in the room were amused by Grammer's behavior, many of the serious critics and journalists were getting pissed off. (Imagine if their cell phones rang and they took non-emergency calls while Grammer was trying to talk to them!) You can find some of their Twitter tirades at #TCAs12.

Meanwhile, as Grammer chatted away, his co-stars got restless. "I like your sneakers," Lathan said to Tip Harris, otherwise known as the rapper T.I.

"Thank you," Harris replied. "These are the Olympic Jordans."

Much later in the session, a critic asked Grammer to explain why he took the call during a press conference.

"Well, there are some things that are more important than others, and the well-being of my wife sits atop the charts," Grammer replied.

I won't repeat some of the words critics were using after the session to describe Grammer's decision to take a non-emergency call during a press session and keep a room full of people waiting. I will note that a similar situation took place a couple of years ago and was handled in a much more thoughtful manner. During a press conference with the cast of AMC's "Breaking Bad" cast member Aaron Paul's cell phone rang. He took the call because it was from his mother and he wanted to make sure it wasn't an emergency. It went something like this: "Hi, mom. Is everything okay? I'm in the middle of something, can I call you right back? Love you."

Remarkably, publicists for "Boss" actually sent out a press release about the incident, along with a photo of Grammer happily chatting with his wife, as if it had been a good thing. Then again, Grammer's behavior probably generated more publicity about "Boss" than the press conference would have without it.

Of greater concern, there are a number of significant cable networks that have been noticeably absent during the cable portion of this tour, including the Turner Networks, AMC, Lifetime, History, A&E and We. Granted, they were all here last January during the Winter Tour, but their collective absence has set to grumbling the many critics and reporters who do not attend TCA's annual January gathering. Surely there are good reasons for these networks to remain actively involved in both TCA tours, given the ever-increasing competition they face for viewers in the modern media landscape. Indeed, we've seen more of Hulu at TCA tours this year than we have any of the individual networks referenced above.

One reason that the cable days at the tour have become so light is that many networks have moved into the TCA schedules of their bigger broadcast siblings. For example, Showtime presents its panels during one of CBS' two days, and the many networks of NBCUniversal Cable are squeezed into NBC's TCA time. Unfortunately, the three NBCU Cable networks that critics like best – USA Network, Syfy and Bravo -- were excluded from NBC's lineup, even though the second day of the company's TCA time, which featured a breakfast with talent and executives from mun2, panels for programs on Oxygen and Style and a lavish luncheon with the stars of several new shows on E!, ended rather prematurely at 2 p.m.

Word is spreading about the increased presence of online channels and programming platforms at TCA tours. In addition to major presentations here by Yahoo!, YouTube and Hulu, mun2 and Discovery both included personalities from their original online programming in their TCA events. It won't be long before an entire day or two at TCA tours are dedicated to online shows. In fact, if cable networks continue to reduce their overall presence here, I can see online networks and channels eclipsing them.

One basic cable network that will never be eclipsed at TCA tours is BBC America. The network presented four lively panels for upcoming programs – one of them the network's first original series, "Copper," about an Irish American cop fighting crime and corruption in post-Civil War New York City. Later that evening it threw a spectacular evening party at a West Hollywood hot spot made over to resemble Eva's Paradise, a bar and bordello featured in the series. BBC America even hired a troupe of actors to roam about the party and spontaneously burst into song and the occasional fight. I can't recall a TCA event quite like this one.

The cable portion of the Summer TCA Tour kicked off Thursday morning with something distinctly different – a telecast from one of the smaller ballrooms at the Beverly Hilton of that morning's edition of "Talking Liberally with Stephanie Miller," which runs daily on Current TV from 6-9 a.m. I'm not sure how it looked on television, or how it sounded – because the ballroom was filled with critics and other journalists, along with executives from Current and personalities from other programs on the network, eating breakfast, clanking utensils and loudly gabbing throughout the 90-minute session, and collectively they proved to be a noisy group. But Miller didn't seem fazed by it when the telecast ended.

This marks the second consecutive Current session at the twice-yearly TCA tours that stood out from the many other cable networks that host sessions during cable's portion of the TCA experience. Last January, Current served up network chairman and media magnet Al Gore, who spoke at length and with much gusto about changes in the network's format and brand, from a hodgepodge of homemade videos culled from current.com to a network dedicated to covering politics from every angle. In just this year alone, Current has moved to the top-tier of must-attend TCA sessions.