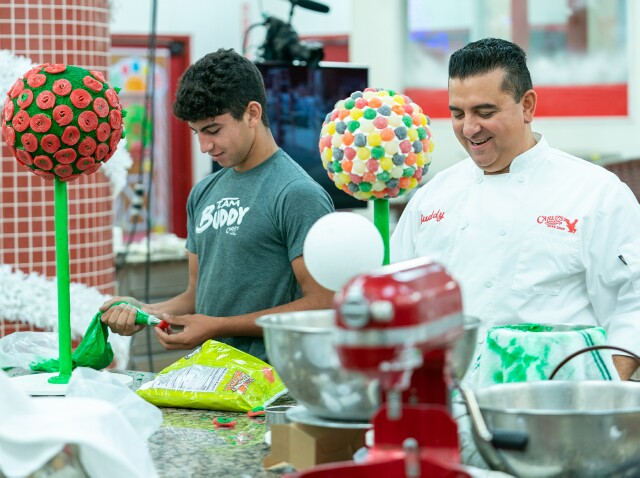 Not many men can carry off an elf costume with elan. One can't be, well, elf conscious while wearing a red and green pointy collar with bells. But Buddy Valastro rocks the look. Better known as the Cake Boss, Valastro returns to Food Network on November 22 with a new holiday series, Buddy vs. Christmas.

"People ask if I am the Grinch," Valastro (pictured at top with his oldest son, Buddy Jr.) told MediaVillage in an exclusive interview. "Do I hate Christmas because of the title? I love Christmas! It is my favorite holiday."

The four-episode competition show pits Valastro and his merry band of children and bakery workers against artisans in other fields. No footage was available of the show shot in the early fall, but the network is promoting it as "bakers versus makers."The two sides have 24 hours to craft a Christmas-themed creation. Valastro takes on Broadway set designers, glass blowers, animatronic experts and Lego brick masters.

Over the years, Valastro's elaborate creations have included a NASCAR cake that weighed over 10,000 pounds and a scale model of St. Louis. The fourth-generation baker does not shy away from an artistic challenge. This, though, was a little different. His competitors may have an advantage in their fields, but only a fool would count out Valastro.

His new creations, which promotions reveal include a working car made out of cake, are among the last he did before a freak bowling accident. The pinsetter in his home alley malfunctioned and impaled his hand. Valastro has already had three surgeries.

"It's coming along slowly but surely," he said. "The thing is, it's time. I just don't know how much strength or which muscles will come back, or how much dexterity I will have. I had nerve damage. Using it a lot [is] part of the recovery, not only physical therapy. It's hard because you are so used to going to wash your face, and two fingers poke your eye out because they're bent in. Depending on how the next couple of months go, because of recovery, there might be more surgeries."

As usual, Valastro sounded even-keeled, almost buoyant. There's a Jersey tough to this family man whose bakery, Carlo's, went from a cherished Hoboken spot -- with arguably the best biscotti in New Jersey -- to one where, after episodes ofCake Boss were telecast, the line snaked down the block. He seems unchanged from his successes, which include shows Buddy vs. Duff and Bake it Like Buddy, store branches, and most recently, TGI Fridays selling his six-layer rainbow cake.

Last Saturday night, his middle son, Marco, helped Valastro make 50 batches of cake batter. Each batch is 240 pounds. That's 12,000 pounds -- roughly the size of a bush elephant, but much tastier. "The rainbow cakes have been doing really well, so I wanted to keep up with the demand," he explained.

Through his injury and recovery, Valastro did what he always has – stayed close to his family and worked hard.

"I am determined to be able to get back to what I do," he said. "And because it is Thanksgiving and the bakery is slammed even though I can't work with my hands as much, I am still here and working crazy as ever, 14- to 18-hour days. The other night it was midnight, so I slept on the couch in my office. I am not letting the hand stop me from running my company and doing what I do."

While the new show was shot before Valastro's injury, his attitude has not changed, and he continues to want to best himself.

"I wanted to kind of challenge people that have different mediums," he explained. "They are masters in their own crafts."

Facing off against a glassblower, Valastro summoned the help of blown-sugar artist. The artisans baked in commercial kitchens in New York, while Valastro worked from his commercial kitchen in Jersey City. In Sunday's premiere, he bakes the tallest cake he has ever fashioned -- a 16-foot high gingerbread house. While Valastro was genuinely wowed by his competitors' artistry, he reckons they may not know the perfect recipe for a good cake to sculpt or how to work fast.

"This show is more about the appreciation of artistry; it is about how much respect we have for one another," Valastro concluded. "And to step back and appreciate each other's work. And from my perspective, I felt like the advantage that we had a little bit was the time crunch. A lot of these people work on a piece over a week or a month, but I am used to working on deadlines. I could not be happier with the show pieces that were done."