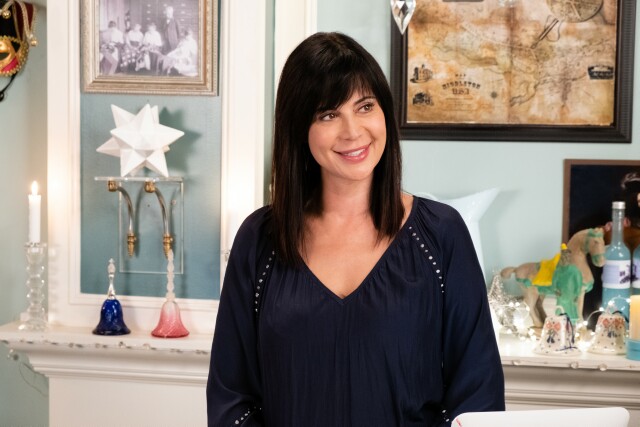 In what has to be the chicest tent ever pitched, one replete with a caviar bar and a massive chandelier, partygoers clink champagne flutes and try to pet Happy the Dog, Hallmark Channel’s mascot.  It’s Crown Media Family Networks’ twice-yearly, all-star celebration of its programming, and in this glam crowd, where so many actresses are petite blondes, Catherine Bell, statuesque and raven-haired, stands apart.  She rocks a black, off-the-shoulder jumpsuit -- not an easy look to pull off -- with the élan of the model she once was.  Over the years, we’ve chatted many times about her work as an actress, but tonight we’re talking about what it means to be an executive producer.  Before her series Good Witch returns for its fifth season, premiering over two nights, June 9 and 10, Bell shared her feelings with MediaVillage.

Catherine Bell:  I have been with Hallmark for 12 years.  The Good Witch was the first movie franchise they did.  It makes me feel old!  I’ve been fortunate enough to be on a few shows that have run a long time and you are heard to some degree, but when you have an executive producer title that is much more of a say.

Jackie:  You’ve had the title since the first The Good Witch movie and throughout the run of the series.  What is an example of your influence?

Catherine:  I say, “Hey, when we turn this into a series this is how my character, Cassie, should evolve.”  For me, it’s never been super hands-on.  I’m not involved in casting.  I trust everyone to do their job.  Sometimes, the harder thing on our show is how much magic to do.

Jackie:  As an executive producer, what can you help steer on the show?

Catherine: Besides Cassie’s story line and the direction of the story, sometimes the dialog.  If someone’s bothering me, I can get them fired -- like that!  (She snaps her fingers, then emphatically adds) never-never-never-never!

Jackie:  You’ve been in Hollywood for a while.  Have you had to deal with harassment and, if so, how did you handle it?

Catherine:  I have been so fortunate.  I saw very, very little of that.  There was always flirtation, always innuendo.  It is annoying, but I have never had that feeling where I had to do something.  Maybe it’s because I started with martial arts movies.  My acting teacher belittled me and made fun of how I said something.

Jackie:  Did your experience as a model help your work as an actress?

Catherine:  I came back from Japan on a modeling tour.  I was very shy at the time.  I hated modeling.  They kept telling me I was too fat.  My eyes were too big. I tried [giving myself] an eating disorder, but I couldn’t because I love food.  I never told anyone this about being a model in Japan. They taught me how to throw up.  I did it once.  I said, “Screw it!”

Jackie:  Did you have mentors?

Jackie:  Do you mentor?

Catherine: I try to inspire people, if someone’s getting ready to quit.

Jackie:  Have you been at that point where life looked bleak?

Catherine:  I was so done with not making money, borrowing money from my mom to make rent.  I was a terrible waitress.  I got my massage license and worked at the Peninsula Hotel for eight years while going on auditions.  I took a cocktail waitress job to make money a few months before that.  Men grabbed my ass.  I knew I couldn’t do it anymore.  I was crying at my dining room table with my husband at the time, and he was saying, “You are so close.”  Then an agent called and said, “You are about to get an offer for JAG!”

Jackie:  What’s next for you?

Catherine:  I’m not sure.  We are talking about another season of Good Witch.  And hopefully something totally different – maybe a JAG/NCIS crossover!  (Editor’s note: NCIS is a spin-off of JAG, which began on NBC in 1995 and moved to CBS in 1997 and ran there until 2005.  In 2003, NCIS was spun-off from JAG.)

Jackie:  Why is it important to have women working behind the scenes as well as on camera?

Catherine:  We connect with each other.  We have a different viewpoint.  I always want to make sure with the MeToo movement to not say all men are bad.  It is very important to have more women writing, producing, directing.

Jackie:  You recently turned 50.  How do you feel about that?

Catherine:  Fifty, so far, is all good.  In my 40s, I did not feel up to directing.  Now, I want to spend time shadowing directors, asking: “Why did you shoot that angle?”  I feel like a lot of actors think it’s easy to direct and it’s not.  I’m starting to research a little.

The two-part season five premiere of Good Witch will be telecast Sunday, June 9 at 8 p.m. and Monday, June 10 at 8 p.m. on Hallmark Channel.