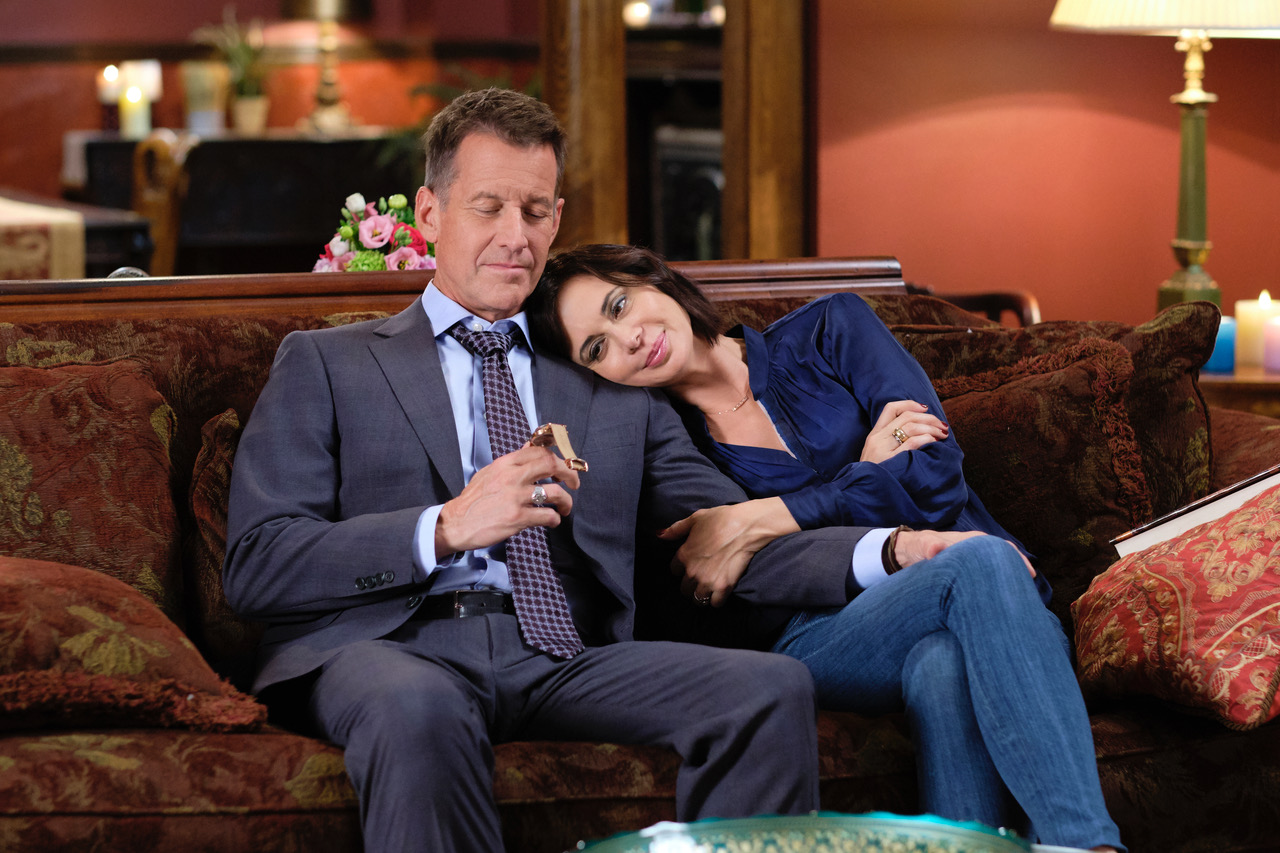 Good Witch is telecast Sunday's, 9 p.m. on Hallmark Channel. Good Witch returned last week for a sixth season and with it bought lots of changes. As Cassie (Catherine Bell) and Sam (James Denton) (both pictured at top) celebrated their first wedding anniversary, they did so without daughter Grace (Bailee Madison), whose character left for college at the end of season 5. "It was so hard to say goodbye to Bailee," revealed series star and executive producer Catherine Bell in an exclusive MediaVillage interview. "We really tried to make it work to keep her, but she had other things she wanted to do and sometimes it's just time to move on. We all adore her so much and I really still feel like she's my daughter. When Grace went off to college I really felt like a proud mom. Bailee is only a couple of years older than my daughter, and they're very similar people as both have huge hearts and are so sweet, so doing a scene with Bailee was like working with my daughter.

"She's moved on and doing wonderful things," Bell continued. "Hopefully she'll be back, she wasn't this season, but maybe there's an opportunity where she can be. Grace is talked about several times during the season, and we have some phone calls. We got so close and before she turned 18, there were times her [real] mom couldn't be with her on certain days, so I was her fill-in mom. I would stay in their apartment and even flew back and forth to LA a couple of times with her, so I did feel like a second mom."

As the old saying goes, 'The show must go on', and following Madison's exit, that's exactly what Good Witch did. "What happened was the show took a really cool turn this season," explained Bell. "It's like it became a little more grown-up. With the kids off to college, there's a lot less of the teen storylines. So we regrouped and the season became more about Sam and Cassie. After the first anniversary, they're kind of looking at their lives now that the kids are gone, and now we're not catering to them, who are we? So we focus on that and their hobbies and interests, which I find great to explore."

Bell is excited the current season will explore some new characters. "There's a lot of relationship stuff which has been great," she mused. "Every character has a relationship, be it new, struggling, or having a curse. So getting to explore each of those has been great. We have a new character (Joy Harper) played by Katherine Barrell who is very mysterious. She comes to town and sticks around for the season. Kat's great and she gets to play with us. Kat's character and Sarah Power's Abigail (Pershing) are these, kind of, maybe witchy, kind of women. I can't say too much, but it's a cool vibe with everyone. It wasn't like things were new or different and Kat was very comfortable right off the bat and the whole cast and crew made her feel super welcome."

In fact, the cast bonded so much that in this time of self-quarantine, they recently managed a get-together, albeit socially distant. "We do have the best cast," beamed Bell. "Off the bat, everything flowed on set and we all missed each other so much we had a Zoom call a few weeks ago! It's funny because we don't normally see each other from January to August, but with our enforced quarantine we did a Zoom Happy Hour where we drank wine for an hour; it was so much fun that we're planning to do it again.

"It's a crazy time for everyone right now," she added. "I'm fortunate to live in Los Angeles, where the weather has been nice. We have a backyard, and everyone is healthy. I know a lot of people are struggling and we're trying to help people as much as we can to help and like everyone, trying to keep the kids occupied and not getting bored or depressed. There are rough days and then the better days where you are grateful."

She's also grateful that as she celebrates 12 years of Hallmark Channel and Good Witch (the first movie premiered in 2008), season six can provide some much-needed smiles. "We're very fortunate to have wrapped this in December," she explained. "It's great to be able to give people some entertainment, as a lot of production has stopped. People have told me they're excited about the show because of how positive it is, and how it helps to make you feel good about yourself. One of my closest friends' husband texted me recently because season five started on Netflix. It was so cute as he's a total dude, but he said, "I fell asleep watching Good Witch last night and it's exactly what I needed. It brightened my day and made me feel like everything was going to be okay"."

Bell is hopeful that Hollywood production will soon resume. She has a Christmas movie she'd like to do, and in this case, a lucky 13th Good Witch movie ready for its annual Halloween premiere this year. "We're set to start shooting in August," she shared in closing. "Those first two episodes air as the movie, hopefully we'll all be back at work soon. They're currently writing it, so hopefully, we'll be back in Toronto then - - fingers crossed!"