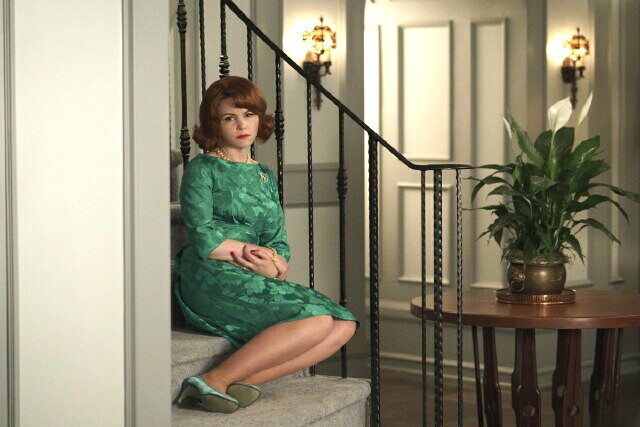 Marc Cherry, the writer and producer known for his work on shows like Desperate Housewives and Devious Maids, has done it again with his new CBS All Access original series, Why Women Kill.  Starring Lucy Liu, Ginnifer Goodwin (pictured above) and Kirby Howell-Baptiste as three wives in three different marriages that all just so happen to take place in the same house, Why Women Kill is a colorful, cheeky and way funnier than anticipated exploration of women scorned, and I expect it’ll be around for a while.  Let’s talk about why Why Women Kill is such a killer show.

WWK follows three wives: Simone, Beth Ann and Taylor.  Simone (Liu, below) occupies the house in the ‘80s with her husband, Karl (Jack Davenport).  They’re a couple of rich socialites whose reputations and money matter more than pretty much everything else.  That is, until Simone finds out Karl’s been cheating on her with dudes.  Liu nails her portrayal of the vapid and materialistic Simone and is hilarious to boot while doing it.  At one point, after confronting her husband, he attempts suicide by swallowing a bunch of pills, to which Simone says, “You think you’re gonna get out of this by dying?  F**k you!”  Then she calmly and politely calls 9-1-1.  It’s pretty amazing. 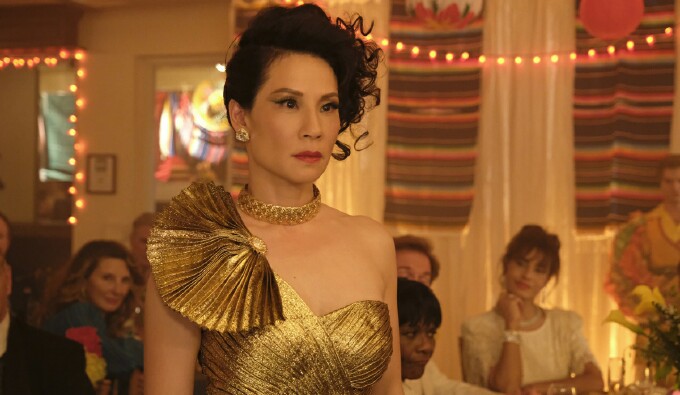 Speaking of amazing, next we have Taylor (Howell-Baptiste, below).  She lives in the house with her husband, Eli (Reid Scott), in what appears to be the present day.  Taylor is a lawyer and feminist who takes absolutely no guff from anyone.  While it hasn’t gotten too tumultuous yet, it seems that the tension in their marriage is going to stem from the combination of its open nature and their new houseguest, Taylor’s “plaything” Jade (Alexandra Daddario).  Oddly enough, I actually like this couple (Taylor and Eli), but the name of the show is Why Women Kill, so, assuming that that’s the rule, it means this whole being alive thing is definitely not going to work out for at least one of them, which is a bummer because no one seem to be the bad guy just yet. 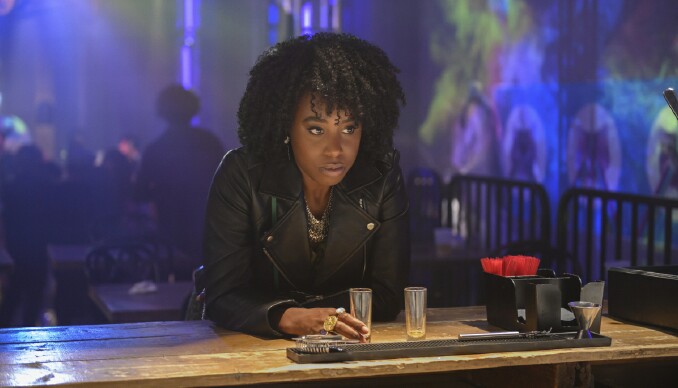 Lastly, we have Beth Ann (Goodwin).  She and her husband, Robert (Sam Jaeger), live in the house in the ‘60s, and have also tragically lost their only daughter at some point before we meet them.  Beth Ann, who is your stereotypical ‘60s homemaker, finds out through her neighbor that Robert is having an affair with a waitress named April (Sadie Calvano).

During Simone’s parts the show feels somewhat lighthearted and saucy, regardless of her impending divorce, and in Taylor’s parts everyone is just so damn likable right now, but Beth Ann’s story is a flat-out tragic tale.  It’s the heaviest of the three so far, which is probably why Ginnifer Goodwin is so perfect for this role.  Goodwin’s great at giving a face to the daily repression of bubbling emotions, and she only gets better when they start to boil over.

Besides the women portrayed by the three talented leads the biggest character in the show is probably the house itself.  Why Women Kill is chock-full of stylish transitions and creative match cuts that focus on specific parts of the house.  For example, Simone may be shown walking through her ‘80s-style foyer, and the camera will follow her into the living room, except once in the living room, it’s now the ‘60s and Beth Ann is there instead.  Besides giving viewers a great sense of the space, it also shows how certain rooms in the house were used over the years. There was a shower sequence in the second episode that consisted of a number of smash cuts, and the cutting back and forth through all three decades was really cool.

Style-wise, I dig everything about this show.  The pop art look of the intro, the use of “L-O-V-E” as the theme, the way everything seems to have a more yellow/golden tint during the ‘60s parts, those wild outfits during the ‘80s parts, all comprise a show that I wish came out all at once so I could binge it.  It’s low key addictive.

I think the allure of Why Women Kill is its honesty about the b.s. that women must deal with (and always have), especially when dealing with men in relationships, and the idea that those men who’ve wronged them will eventually get their comeuppance.  This series manages to stay light because it’s not dealing with issues as heavy as say, physical abuse, so much as it deals with marital issues -- things like incompatibility and infidelity -- and since anyone who’s ever been married (or divorced) probably knows what imagining a murder is like, watching these guys get their just deserts is going to be cathartic as hell.

So, the real question isn’t why do women kill?  It’s why wouldn’t you watch this smart, all-knowing show?