CBS at TCA -- Edie Falco on Her Return to Broadcast TV 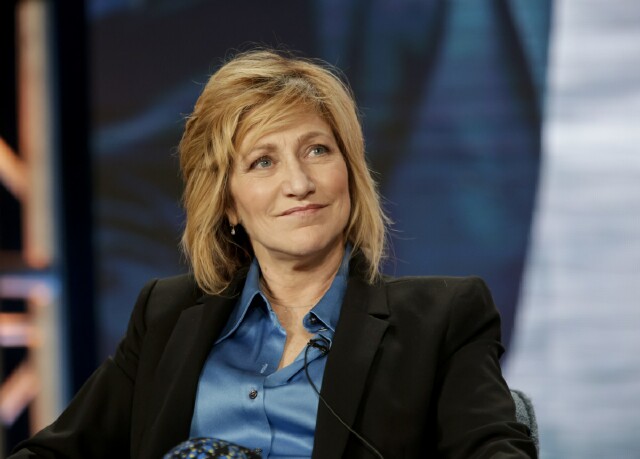 Pasadena, CA -- Edie Falco returns to network television in February in CBS’s Tommy, starring as Abigail "Tommy" Thomas, the first female chief of police for the LAPD.  The series marks her first TV effort since 2017’s Law & Order True Crime: The Menendez Murders, in which she played defense attorney Leslie Abramson, who famously represented Lyle and Erik Menendez in the trial for the gruesome murders of their parents.  After skirting all sides of the law -- as a mob wife in The Sopranos’ an attorney, a pill-popping drug addict in Nurse Jackie and now a chief of police -- the talented actor believes she has a pretty good handle on all facets of the law.  “What's funny is, with every job you get you kind of jump into that headspace,” she told MediaVillage on Sunday during CBS' morning at the Winter 2020 Television Critics Association tour after a panel for her new series.  “I remember saying to my mother when I was very young that I knew what it felt like to be anybody, and my mother looked at me and thought, ‘I know what she's going to do.’  But you get the idea of what they're about, what their family is like, what their job is, and that's the lane you take.  (Note: CBS had only two new series to promote at TCA -- Tommy and the FBI spin-off FBI: Most Wanted.  The network also presented a panel for freshman drama Evil, a critical favorite.)

“I never really thought about [another profession] or doing anything else,” she continued.  “Not a one.  I thought [when playing a nurse, and then a police chief] ‘My God, some people want to do this job?’  I am not one of them.  My mom was an actress and did theater and I would go with her.  I fell in love with it, but I never thought I'd be an actress because I never knew what that meant.  I thought I’d have a real job, and then do plays at night like my mom did.  I don't know how this whole thing worked out.”

One of the many things that excite her about playing Tommy is that the character is gay.  "It's important that every single person -- large, small, different colors -- gets represented in our television,” she said.  “I think everybody in the world wants to look at television and be able to find themselves somewhere, and I think we've been leaving huge swaths of the population out of that experience.  I could always find myself on television as a kid.  The world is changing.  We've got to change with it."

While Falco is known for her tough roles, each portrayal was masked behind a certain level of vulnerability.  It’s a character trait she enjoys, but she admitted that with time it has started to diminish, especially with this character.  “Over the years the masking of the vulnerability has been less,” she shared.  “Now it's more about standing in the vulnerability, and perhaps more of an acceptance of her own vulnerability, which in some way may mirror my own journey.  It's like [for] a lot of us as we get older, we’re more open to embracing the parts of us that we’re afraid of or maybe not proud of or something.  The roles I'm playing are mirroring that, and maybe that's why I responded to this.

“I kind of immerse myself, even if it’s just pretend,” she added.  “It's a very powerful and guiding force, and rarely is there a line I have to say that I don't have a point of view on based on the character I'm playing.  I do feel very lucky that way.”

It’s hard to comprehend that almost 13 years have passed since the iconic final episode of HBO’s The Sopranos, when Falco retired the character of Carmela Soprano.  While she’s not one to really revisit past projects, for her The Sopranos is a different story.  “If I stumble on it, and I'm sitting with my daughter, I'm like, ‘Oh my God!’  She's all, ‘That's great, can we change the channel?’  My kids have no interest and are over it.”

Falco, however, feels differently, and says she wouldn’t mind playing Carmela again.  “I've always said to [Sopranos creator] David Chase if he ever wanted to do The Sopranos again with Carmela taking over the family, I’m in.  I feel she would do a great job.  But there hasn't been any talk of that.  David usually laughs about it and that's the end of the conversation.

“There is a Sopranos movie coming out, but I'm not involved,” she continued in closing. “I believe it's called The Many Saints of Newark.  Jim Gandolfini’s son [Michael], who I’ve known since he was born, is playing Jim as a kid, and that is beyond moving.  People said it was eerie how good this kid was, and I knew this kid growing up!  I saw him get his first haircut in Jimmy's lap in the hair and makeup trailer.  I don't believe Carmela is a part of it -- I think she would have been about 10.  But [she] might be.  I just don't know.”