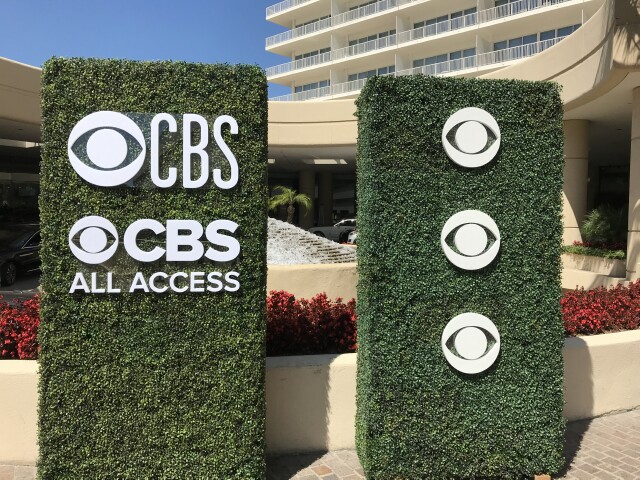 Beverly Hills, CA -- In keeping with recent tradition of holding CBS executives’ feet to the fire during Summer Television Critics Association tours, during the network’s day here last week reporters opened fire on an “old” story about the drama Bull (the on-set harassment in 2018 of guest star Eliza Dushku by series lead Michael Weatherly, already exhaustively covered in the entertainment press) and a fresh hell concerning the current season of its summer series Big Brother involving what has been perceived as racist behavior toward three African American house guests on the part of the show’s producers.

Good thing the network has what has been widely judged by critics to be the best new broadcast series of the fall, the sitcom The Unicorn, starring Walton Goggins.  The pilot does, indeed, feature some of the best written, directed and acted scenes in any new fall show so far.  (That is an early observation, not a full review. That will come later.)

Anyway, two years ago at the Summer 2017 Television Critics Association tour, CBS during its executive session was raked over the coals by reporters who were fed up with what they believed to be a lack of leadership on the part of the network in the important areas of diversity and inclusion.  I remember at the time thinking that while there was certainly room for improvement in those areas, CBS and the other broadcast networks had come a long way in their efforts to advance diversity on camera.  It’s not that the fired-up reporters were wrong; it’s just that some of them were not covering television in the ‘90s (and apparently not even watching it at the time) and had failed to do their homework.  There has been exponential improvement since that decade, which was filled with monochrome clones of Friends and whitewashed youth ensemble dramas.

CBS after the 2017 outcry responded to the press, stepping up its dedication to diversity and inclusion in 2018.  The response certainly showed in its 2018-19 freshmen class, which included successes The Neighborhood and God Friended Me.

Feeling powerful after getting tangible results, critics last year at the Summer 2018 TCA tour shifted gears and complained that the network did not have enough properties with women in the lead roles.  (Apparently, they had missed Mom, Elementary and Madam Secretary, not to mention The Good Fight and Star Trek: Discovery on CBS All Access, among others.)

The network has been working to correct that, too.  The sitcom Carol’s Second Act (starring Patricia Heaton) and the legal drama All Rise (starring Simone Missick) are among its 2019-20 freshmen.

Last week’s CBS executive session started off calmly enough.  “A couple years ago, [senior executive vice president of programming] Thom [Sherman] and I stood up here and told you that CBS was going to be better in terms of diversity and inclusion,” said CBS entertainment president Kelly Kahl.  “Last year, our new slate of shows was a good first step, and I think with our slate this year, we've taken a couple more steps forward.  We still have a lot of work to do, but we're confident we're on the right path.  Speaking for Thom, myself and everyone at CBS, our commitment continues.”

“We are clearly looking different on air, and our commitment to inclusion and diversity behind the scenes is just as important,” Sherman added.  “I'm really pleased to report that this season 53 percent of our writers are women or people of color.  When we finish filling out our director slate, 50 percent of our directors will be women or people of color.  We're proud of the work that we're doing in inclusion and diversity, but we know that that work must continue, and it will continue as we look to evolve culturally, creatively and commercially.”

Their spirits were so high that they chose the occasion to joyfully announce that there will be a second season next year of this summer’s successful if critically panned five-night-a-week reality series Love Island, a show Kahl enjoys tweeting about.  It has brought to CBS a surge in female viewers 18-34, a young and desirable demo not known for flocking to the network.

“Yeah, my annoying tweets are just going to continue next year,” he laughed.  "Love Island was our most streamed show this season so far, outpacing Survivor, Big Brother and even The Big Bang Theory."

“Less than a year ago, there was extensive press coverage of the problems at Bull which resulted in a multi-million-dollar settlement for Eliza Dushku,” one journalist said.  “According to press reports, Dushku brought her complaints, first of all, about Michael Weatherly to showrunner Glenn Gordon Caron and she soon found herself fired from a job where she had been previously told she might become a series regular.  CBS executives have made it clear that Weatherly himself faced no consequences or sanctions for his actions.  Can you please tell us what consequences or sanctions, if any, were imposed on Glenn Gordon Caron?”

“We found out about the settlement kind of at the same time you did, and we took a 360 view of the entire situation [at the time],” Kahl replied.  “We wanted to look at it with fresh eyes.  What we found was in Michael's case there were no incidents, no complaints in his time at Bull and none on either side of the isolated incident on Bull.  He was at the time remorseful and apologetic.  When the settlement came out, it was made public, he was remorseful again and apologized.  He is undergoing leadership coaching.  He is taking responsibility as the head of a show to make the set a positive place to work.  We were just there last week, and the entire cast and crew had just undergone some training before the start and they're all in a good place.  Glenn is also undergoing leadership training, and it will continue in the future.”

At that point, there were more questions about CBS’ new shows.  And then …

Noting that when it comes to diversity and inclusion on reality shows CBS has always been “strong,” a critic said, “I just want to quote something that the only black female cast member on Survivor wrote after her experience this year.  She said, ‘There's a significant difference between ‘diversity’ and ‘inclusion.’  Casting a few black faces each season simply isn't enough.  Include them in the story.  Stop giving them stereotypical edits that perpetuate the same stereotypes that many of us come on the show to combat.’

“This summer,” the critic continued, “Big Brother producers have asked their only black female cast member to act and talk in a more stereotypical way.  They've edited out hateful and violent things that white men have said about her and edited her into someone who seems rather crazy.  Is it acceptable to you that your two top reality shows allow this behavior and continue to perpetuate stereotypes through the choices the producers are making in editing and in production?”

“In the case of Big Brother, we learned that a producer, in an attempt to get a sound bite from one of the house guests, overstepped,” Sherman replied.  “That producer was reprimanded, received unconscious bias training, as did all of the producers on the show, and we don't believe that an incident like that will happen again.”

“What about on Survivor?” the critic cried.  “Again, this is a pattern that's happened over ten years, and these are just some specific examples.  So that's a great first step [with the Big Brother producer], but how do you plan to address it across all your reality TV shows and with all of your producers?”

“On all of our shows, the producers receive unconscious bias training now,” Kahl said.  “In terms of how people are represented, I think the vast majority come off their shows very happy with the way they were represented.  Most people who have been on those shows speak very fondly of their experience.  In the cases of all these shows, there are thousands of hours that are condensed down to 42 minutes per episode, and we are simply not able to show every single thing that happens on the show.  We strive, and the producers strive, to show a good representation of what happens, and I think they do a good job of that.”

“You guys have been in situations before where people have tried to talk to you about your lack of diversity in programming, about your lack of gender diversity,” another clearly exasperated critic said.  “Finally, you saw the light, and we're glad to see this in your fall programming.  We are now telling you that you have a problem with your reality shows.  Why can't you take that criticism and do some substantive looking at it rather than trying to spin it?”

“I will say, on Big Brother, half of our cast this year is diverse, and the last three winners of Big Brother have been people of color,” Sherman replied.

“This [summer] you had a situation where your three people of color were stuck in some sort of camp situation where they had to live in lesser circumstances than the other house guests,” the critic shot back.  “The people of color have been systematically eliminated from the show.  People are talking about the racism on Big Brother, and you are telling us one producer got some kind of training.”

Kahl was confident.  “First, we said all of the producers have received training,” he explained.  “Second, I would say that we have heard things on the show that we are not comfortable with, that we have not enjoyed hearing; and we will absolutely, after the season is over, take a look at the show.  We try to go back [after every season] and look and ask if there's anything we can do better next year, and that is something we will do after the season is over.”

Once again a few critics were able to ask about CBS’ new shows.  But then … a reporter in the room wanted details of the “leadership counseling” that many people in the Bull family are receiving.

“I think it's kind of implied in the name,” Kahl replied, stating the obvious.  “It's how to be a leader on the set.  It's how to set a positive example for everybody.  Michael takes that very seriously.  I think Glenn does as well.  These are the two people front and center on the show, and they want to be strong and as good and fair leaders as they can be, and this training helps them do that.  We've had some courses at CBS recently that have helped us learn about cross generational leadership.  We've done unconscious bias training.  None of us are too old or too smart to learn how to do things better.  I think that's what that leadership training entails.”

On all CBS shows, “everybody, top to bottom, is receiving training,” Kahl later concluded.  “In any situation where we receive information or hear something is askew on a show, we investigate it immediately.  That's what happened on Bull.  I can't add a lot more to it other than the expectation of our showrunners is very clear that they will run a welcoming set for everyone on it from top to bottom.”