CBS at TCA: Will "CSI: Cyber" Be the Most Important Show on TV? – Ed Martin 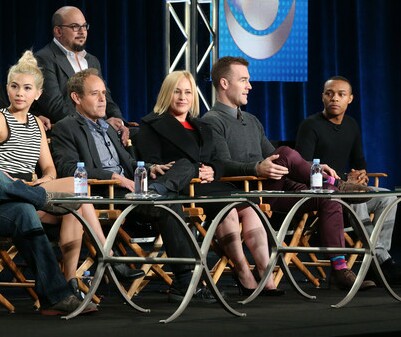 Pasadena, CA – CBS served up a busy half day Monday at the Winter 2015 Television Critics Association tour, from a breakfast celebrating the 30 th season of "Survivor" to an executive session with CBS Entertainment Chairman Nina Tassler to a session for the upcoming sitcom remake "The Odd Couple" (with Garry Marshall serving as executive producer, as he did with the original back in the '70s) to a panel with the network's newest late night star, James Corden, who takes over "The Late Late Show" on March 23.

But the most important session of the morning had to be the one for the upcoming third spin-off from the profoundly durable "CSI" franchise, "CSI: Cyber," which debuts on March 4 and stars Patricia Arquette, James Van Der Beek and Peter MacNicol. Anticipation was high for this panel, in part because Arquette had just won a Golden Globe award the night before for her performance in the acclaimed drama "Boyhood" and in part because of recent events in the news involving hackers and online crime.

In fact, news of the apparent hacking by militant group Isis of the United States military's social media accounts broke shortly before this timely session was taking place.

"Welcome to the reboot and the future of our franchise, 'CSI: Cyber,' where every crime is amplified," "CSI" creator Anthony Zuiker said at the start of the session. "The bank robbery of yesterday was going into a bank, breaking in, taking a lot of money. The bank robbery of tomorrow is taking three cents out of your account. The arson of yesterday was burning down a forest because you're burning love letters for a loved one. The arson of tomorrow is hacking into your smart house and having all the megahertz be rerouted to your appliance to burn your house down in the middle of the night."

For anyone who was paying attention, Zuiker's remarks and those of cast members and other producers throughout the panel couldn't help but induce chills. The panel included a woman named Mary Aiken who serves as an advisor on the show and is a "cyber psychologist" and a professor of cyber analytics at Hawaii Pacific University. (Arquette's character, Avery Ryan, is based on Aiken and has already appeared on the "CSI" mother-ship.)

"We knew cybercrime was on the horizon as of five years ago," Zuiker said. "It was one of those things that first came on the scene that was very, very scary to everybody. [People asked] "How could this possibly be? Maybe this is not going to be real." [Now] you cannot pick up a newspaper or go into a CNN app and not find something cybercrime oriented. Even as of this morning, the Central Command was hacked in the United States of America. These things are happening daily. And I believe our audience will be very curious about what this subject matter is. 'CSI: Cyber' will provide a level of entertainment and also edu-tainment."

"I feel like we're at the dawn of a new time," Arquette said. "This is like the Industrial Revolution. This is an explosion of the way that we're going to be living our lives. [The writers] know how to write things that are entertaining, moving, that excites audiences. And yet they're also introducing all this information about these new technologies and the ways that we're living now, moving forward, the way that crime is developing."

Aiken explained that she is involved in "all aspects" of "CSI: Cyber" "from the creative process in terms of conceptualizing episodes, all the way down to working with the script. We're trying to deliver an authentic interpretation of cybercrime. We're slightly future paced in terms of what it could be. Our first episode [is based on] an actual case [involving] a two-year-old infant [in which] a baby cam was hacked and a predator was verbally abusing the infant online when her father walked into the room. We wrote, conceptualized, filmed and had finished the episode when, just eight weeks ago, a website in Russia [hacked footage from] 75,000 individual webcams, and it ranged from footage of malls and stores to people's driveways, to footage of infants in their cribs. So this was footage that was unsecured and hacked and available for all to see. I think it was a good example for us in terms of how we conceptualize crime and then how it manifests."

"One of the things so horrifying about all of this is that 90 percent of the time, it's totally random," said "Cyber" co-star Charley Koontz. "It has nothing to do with you. There's nothing you can do. It's somebody who wants to park outside your house and hack onto your wifi and steal all your stuff and really put you in a precarious situation. That's what I found to be the most crazy about all these scripts: We have to solve crimes where two people aren't linked. There's no jilted lover and there's no bully at school."

"Cyberspace is an environment," Aiken explained. "It's a place where people go, especially youth, and they can become very immersed in [it]. So if you think you have problems with your kids with their mobile phones and they won't pay attention at the dinner table, wait till they come with a full HMDU, head mounted display unit. Try talking to them then, when they're actually in a virtual reality environment. Everybody in the family will be able to engage with the show, be entertained, but most importantly, be informed about safety and security aspects of [technology]".

"I don't think we should hide from it," Arquette cautioned. "This is the reality, and it is sort of like an ostrich burying its head in the sand to pretend this isn't happening. We may want to question if we have to have every device Wi-Fi enabled? Do we really have to have our coffee maker Wi-Fi enabled? We might want to think about the products we're using and how they can be changed and removing some of those components and keeping them a little more low-tech to avoid some of these unnecessary, extra things that are glommed on for convenience. It's pretty inconvenient when you get hacked! So we might want to start thinking about actually buying products, supporting products and companies making products that do keep us a little safer from this."